Making electricity more sustainable is still a tall order. At present, greenhouse horticulture is still more than 80% dependent on natural gas-fired combined heat and power (CHP) plants. As such, the cluster still supplies a lot of power to the grid. This is going to change, predicts consultancy firm BlueTerra. The consultancy was commissioned by Greenport West-Holland to carry out a study on the electricity supply of the future for Westland, Oostland, and Voorne-Putten. At the recent Meet&Greet Energie, Jeroen Larrivee gave a presentation on the study. 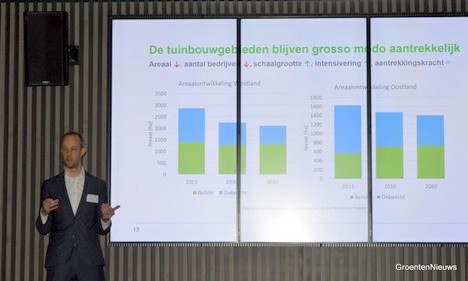 Greenport West-Holland's 'Nieuwe Energie' magazine published the story below, also about the study.

The energy supply is going to change significantly. However, it is uncertain where exactly it will go. Especially after 2030, the images vary widely. The images based on the literature review, interviews, and analysis are as follows. Natural gas CHPs are going to run less and less and shift towards providing peak power and backup. There is debate whether CHPs will be completely gone by 2040 or whether they will still be needed occasionally. The advent of hydrogen may offer CHPs new prospects. The heat from natural gas CHPs is largely being replaced by sustainable heat from heat networks. Greenport West-Holland, in particular, is working hard on heat networks. It is estimated that 80% of companies will be connected to sustainable heat by 2040.

Heat and cold storage
There are also opportunities for heat pumps in combination with heat and cold storage (WKO). LED lighting is breaking through, as are electric boilers for heating. The region has good sources in terms of heat networks, CO2 networks, electricity networks, and the planned hydrogen network. Electric boilers will first be put down with the primary incentive of joining the emergency power market, but will also be used during the growing number of 'cheap' hours due to scaling up offshore wind and solar power. Thus, the greenhouse industry helps to keep the grid in balance. It is expected that a very substantial proportion of the exposed farms will purchase an electric boiler, and so will the unexposed farms that have a suitable power connection. However, the maximum number of hours an E-boiler can run is also expected to be limited to around 1,000 per year. An E-boiler will therefore supply a limited part of the heat demand.

More electricity purchased from the grid
With fewer hours of CHP running, horticulture will therefore produce less electricity itself and buy more from the grid. At the moment, many companies do not yet make maximum use of their connection when it comes to power purchases. This is because often, the CHPs are also on when the lights are on. In the future, there will be many times when all the lighting power is taken from the grid. Another concern is that the simultaneity of power purchases is increasing. High-voltage grid operator TenneT is increasingly calling down-regulating power at the national level. This means that a fee is paid to take power. Greenhouse farms then turn on lights and/or electric boilers at the same time. This can actually cause problems on local grids. 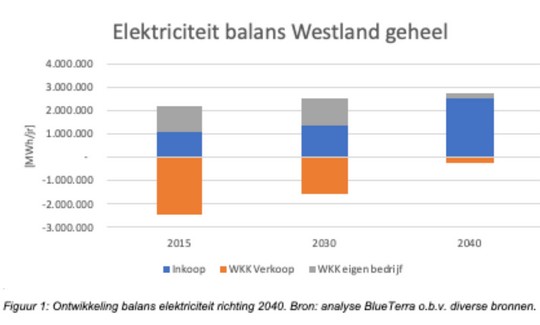 Greenhouse horticulture is flexible
There is a great need for smarter use of our grids. However, regulations are lagging behind here. The tariff structures need to be redesigned so that the flexibility that greenhouse horticulture can offer can really be unlocked. There is still a big challenge here. The question is who should pick up the gauntlet. Network operators often cannot and should not play an initiating role. So it will have to come from the market.

The greenhouse cluster can change gear quickly and is very flexible. This means it can continue to play a major role in the energy system, provided the laws and regulations cooperate. It is impossible to say now what the world will look like in 2040. However, the greenhouse horticulture cluster in Greenport West-Holland has a good hand: with sustainable heat, electricity, hydrogen, CO2, energy storage, and flexibility, there is a good basis for high-tech sustainable greenhouse horticulture.