NL: Grid operators not shocked by growth in electricity demand for greenhouse horticulture

"We haven't been paying as much attention to electricity during this energy crisis," said Nico van Ruiten during the annual Meet&Greet Energy. It's all about gas these days, but we 'have to get rid of it,' while electricity becomes even more important.

Reason enough for Greenport West-Holland to have three speakers zoom in on the role of electricity in the energy transition. Jeroen Larrivee of BlueTerra, Robert Kuik of TenneT, and Eric van Heijningen of CombiVliet did so consecutively, after which Frank Binnekamp replaced Jeroen in a panel discussion on behalf of Juva. 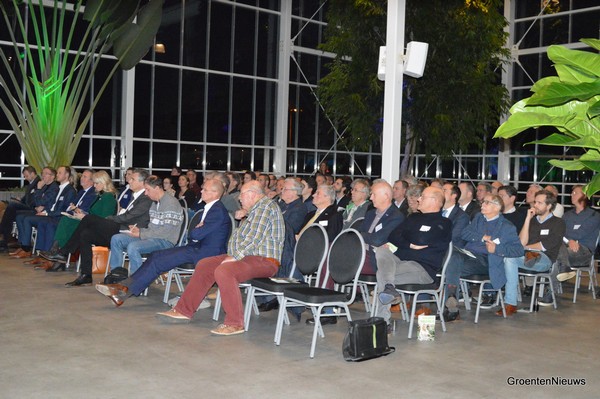 Taking the lead
Before they were given the floor in front of a room with around a hundred people present, chairman Nico and then Meindert Stolk, chairman of the Greenport and deputy of the province of South Holland, had already spoken briefly, and host Edward Verbakel of VB had been given the opportunity to speak about his still new accommodation and the situation in horticulture. "We don't realize at the moment what advantage we are going to have in the end because of the crisis, he stated. Although it may not be entirely appropriate to say that to the grower in crisis now," he added. 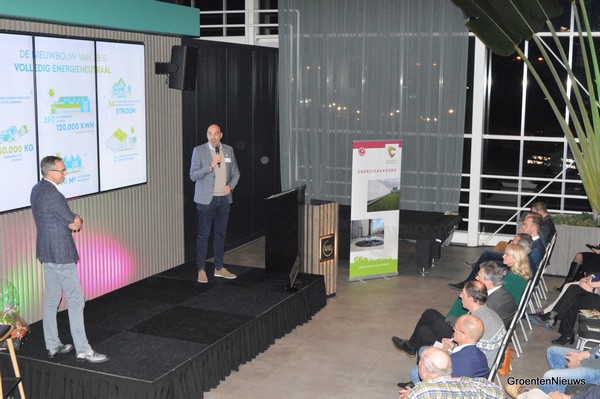 Acceleration
Many energy developments have accelerated. The Greenport, in response to the EnergieAkkoord (Energy Agreement) signed in 2021 for the next four years for Greenport West-Holland, has also drawn up an acceleration agenda. This will be further developed in the coming year, Meindert told us. He also dwelt on 'bright spots' in times of crisis, which he said include the newly signed covenant, money from the National Growth Fund for heat projects, and "the first pipes of WarmtelinQ that are now going into the ground." 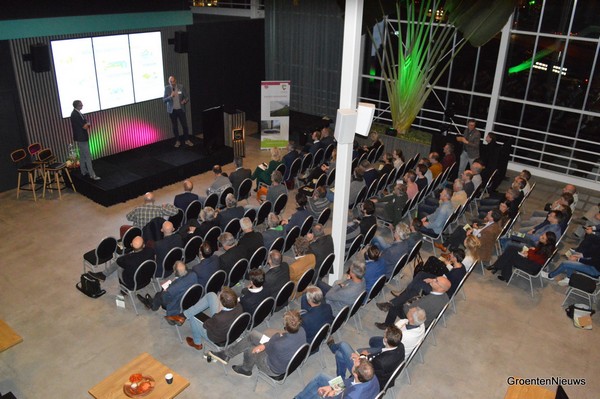 Electrification
Jeroen Larrivee of BlueTerra kicked off the speakers' panel. BlueTerra, commissioned by Greenport West-Holland and is studying what the electricity supply in climate-neutral greenhouse horticulture could look like in the future.

Jeroen outlined some images from the report 'electricity fluctuates, greenhouse horticulture balances'. He indicated that towards 2040, Oostland in particular still sees growth potential for lighting, partly because this greenhouse horticulture region currently lags somewhat behind other areas in this respect. The energy experts foresee the biggest changes in the field of electricity after 2030. Until then, changes remain 'limited,' and CHP still has an important role to play in balancing the electricity grid. 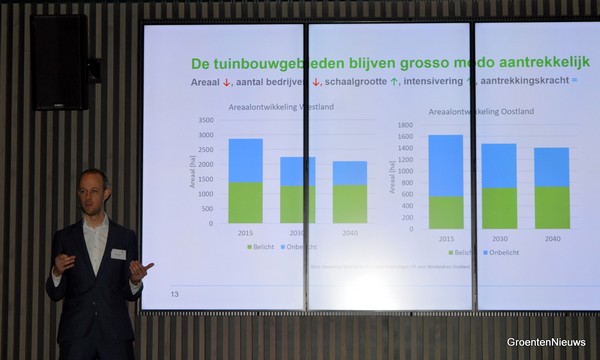 Balancing
In time, greenhouse horticulture is going to rely more heavily on the electricity grid. This is mainly due to an increase in purchasing from the grid. To ensure that this is possible, Jeroen believes the crux lies in good coordination between customers and grid operators.

The challenge is simultaneity. More and more growers know how to deal with imbalance, but this also creates peaks at those times. The grid has to be able to handle that. Dealing with the possibilities in a smart way, but also possibly adapting the tariff structures, should take care of all this.

In the final presentation of the afternoon, Eric van Heijningen, Finance Director of the large tomato grower CombiVliet, argued in favor of automating electricity supply, demand, and flexibility capacity. This should make it possible to coordinate the switching on and off of nearby CHPs and wind turbines, for example. Providing emergency power to grid operators is an opportunity for growers, according to Eric. 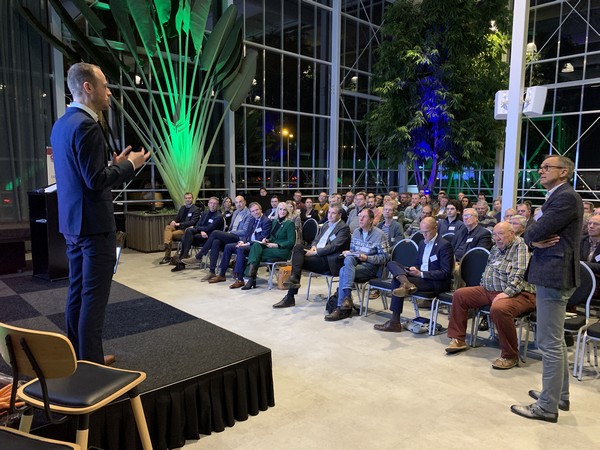 More LED
After the first presentation, chairman Nico wondered how it could be that electricity demand is increasing when many more LED lights are to be hung in greenhouses anyway. Jeroen explained that BlueTerra expects the electrification in the sector to increase, that even when growing under LED, there will be issues such as (extra) dehumidification and that investing in LED does not necessarily mean a saving because sometimes it is also possible to light more hours for the same amount of electricity. 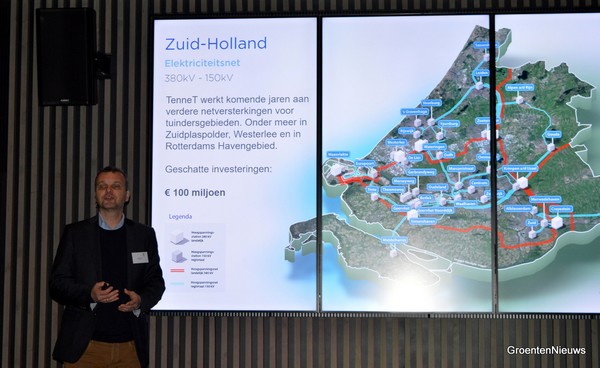 No worries
On behalf of TenneT, the national grid operator in the Netherlands (and partly also active in Germany and offshore), head of grid planning Robert Kuik spoke. He was able to reassure the audience. On the growth in electricity demand from the sector outlined by Jeroen, "I am not worried."

Certainly, if the big change takes place after 2030, it will be fine. And even if it is before then, Robert sees plenty of opportunities for grid operators to adapt to it. For the grid operator, however, it is important to know exactly where and for when investments need to take place. "We cannot invest everything ahead of time," he says.

Congestion study
Thirteen billion euros will be allocated by the grid operator until 2030 to make the electricity grid ready for the future. Zuid-Holland does not have the biggest bottlenecks, he indicated. However, a new energy distribution station will be built in the Zuidplaspolder.

Fellow electricity specialist Frank Binnekamp of Juva, which includes Westland Infra, "wasn't discomforted either" about the picture Jeroen painted. He did, however, indicate that congestion studies are currently underway as many CHPs are running and feeding electricity back into the grid while the lights in the greenhouses are more often left off. "January will be crucial," he indicated. 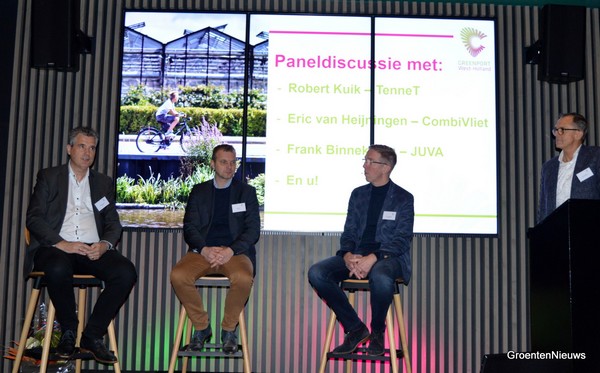 Lighting less
On behalf of major tomato grower CombiVliet, Eric van Heijningen showed how practitioners, and growers, look at the energy issue and the energy crisis. He outlined, in his presentation, which is covered in more detail here, how the company is dealing with the current situation. Through adjustments in cultivation, reduced lighting (24 out of the normal 111 hectares this winter), and feed-in power, CombiVliet is coping well with the effects of high energy prices. Van Heijningen said he recognized the developments outlined.

In addition to LED lighting and building 12 hectares of greenhouse in Middenmeer in 2023, the company is investing in e-boilers and solar panels at various locations in the coming years. In Rilland, the company is investigating the use of residual heat released during hydrogen production from an electrolyzer planned in the area. 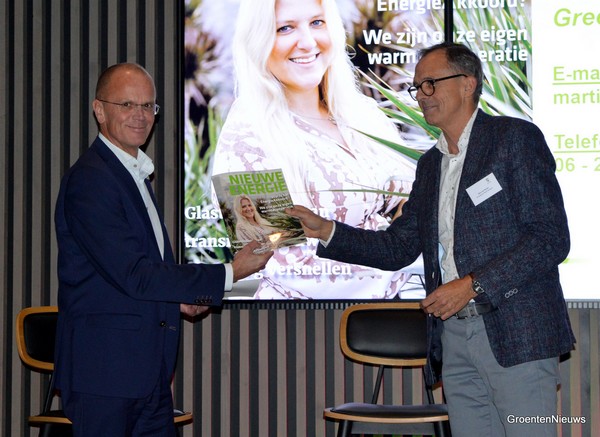 In lieu of the proverbial baton, Nico passed on the 'Nieuwe Energie' (New Energy) booklet to successor Martin.

New program director for EnergieAkkoord
At the end of the afternoon, the audience was introduced to Martin van der Hout as Greenport West-Holland's new Programme Director, EnergieAkkoord. He succeeds outgoing program director Nico van Ruiten, who was put in the limelight by Greenport program director Jolanda Heistek, as was his colleague Menno Laan, who is stepping down as Energy Theme Coordinator and has a successor in Nellie-Anne Guijt. 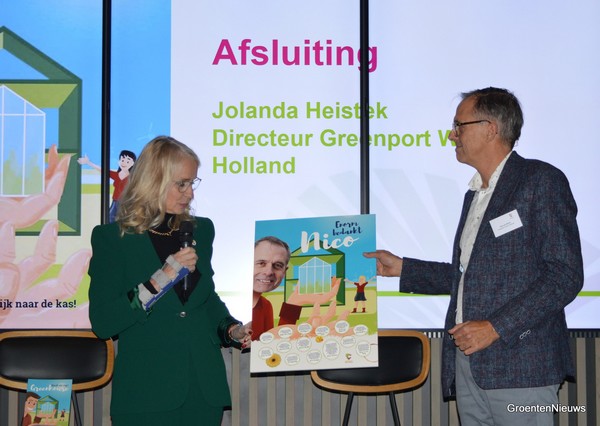