Next year, major tomato grower CombiVliet will have the last of eight blocks of 12 hectares of a greenhouse built in Middenmeer. This was said by Financial Director Eric van Heijningen on Thursday afternoon during Greenport West-Holland's Meet&Greet Energie. His story revealed that it is not the only investment the growers are making. The energy crisis and transition requires adjustments. Collaborations help make those adjustments. "As a separate horticultural company, it becomes difficult," he said.

Less exposure
On a total area of 128 hectares, the growers were used to using a lot of lighting until this winter. In the locations in Middenmeer and Rilland, as well as a location in Westland, the lights were previously on in the winter to grow tomatoes all year round. This winter, 'only' 24 hectares of the normally 111 hectares were lit, normally accounting for 2,500 lighting hours.

It is the result of market developments in which it has become very difficult to grow tomatoes under lights in winter. In his presentation, Eric outlined what it looked like in terms of energy until mid-2021. Growers were "marginally" hedging against price increases. "Buying on the day was often cheaper than set prices," he said. 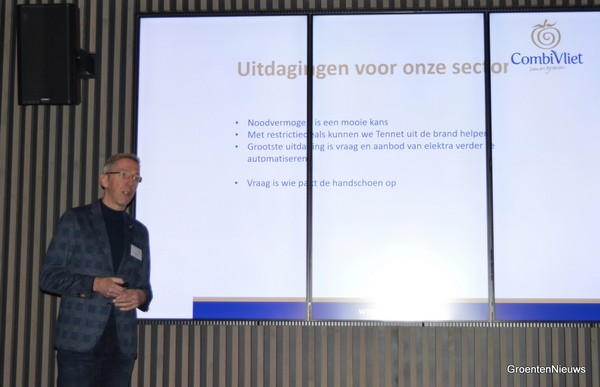 Committed to gas
When prices started to rise, growers were faced with the choice of whether to commit to gas or not. Both for the winter of 2021 and for later winters. They did become tethered, but the cost of doing so was nothing like it was a few years ago.

Eric explained how it is "increasingly difficult" to commit to gas for later winters. Whoever buys in has to pay an advance, but like gas prices themselves, these advances have also risen sharply. Paying 88 euro cents per cubic meter of gas in advance is unfeasible for 'many companies,' the finance director indicated.

The growers themselves eventually concluded that they had committed too much gas. This is because there is less exposure and the Tomato brown rugose fruit virus, which makes growers switch crops earlier, also plays a role in this. More greenhouses stay empty for a longer time.

Positive result 2022
On the screen, Eric showed in percentages the impact of high energy prices on CombiVliet. Electricity consumption fell by 23%, gas consumption by 39%, and because the CHPs ran less, less CO2 was generated itself. As a result of less lighting and CO2 dosing, production fell by 14%. Turnover finally fell by 8% because the price per kilo was higher. Because growers had lower energy costs, the company still ended up with a positive result in 2022.

High tomato prices?
Looking ahead to the winter crop for 2022/2023, growers were busily calculating every week from mid-2022 onwards. Would an exposed crop be profitable? Energy prices were closely monitored, but there were also constant discussions with the plant grower. Eventually, 24 hectares were to have an exposed crop, and the rest of the greenhouses will be planted in December and January.

Meanwhile, energy prices are uncertain, but so are tomato prices. "What tomato prices will do this winter is a mystery," Eric said. "They could just be very high." In doing so, he also pointed to reports from several foreign countries, where growers are also growing with no light or much less light.

Via hybrid to full LED
Looking ahead, the growers are going to invest heavily. As mentioned, a new greenhouse will be built next year, but growers are also investing in LED lighting. In the greenhouses exposed this winter, this is still hybrid lighting, but saying goodbye to HPS lighting altogether will happen in the future. Even before next winter, growers are looking at full LED. Installing a double screen also comes into play.

E-boilers
Outside the greenhouse, there are also plenty of energy investments on the cards. Eric shared that e-boilers are being purchased for several locations. In response to a question from the audience, he said he also knew stories of parties wanting to invest in these but are being held back by congestion management. If it were up to the man from CombiVliet, in that case, the government would pull out the purse strings to solve any bottlenecks. Anyway, he is critical of the government. "We do want to deliver, but that comes with conditions," he says. The ODE and also SDE problems are not helping the sector.

The growers are also having additional locations connected to geothermal heat in Westland, while in Middenmeer, there will be additional geothermal heat available that growers can use to heat their greenhouses. In addition, if they are not already there, there will be solar panels at all locations. "It is also important to show your surroundings that you are investing in sustainability," the finance director indicated.

Residual heat
Finally, research is ongoing into the use of residual heat for the Rilland site. The production of hydrogen from an electrolyser planned in the area releases that heat. The growers see opportunities in this for their greenhouses. Collaborations help growers move forward. Eric sees particular opportunities for collaborations with parties outside the greenhouse sector.