Thanksgiving sales make or break November in food retailing. According to the November IRI survey of primary shoppers, many Americans were back to celebrating like normal. "However, inflation did take a bite out of Thanksgiving spending, and for some categories, this was a substantial one. Fresh produce held its own with units and volume trending close to last year's levels," said Jonna Parker, team lead fresh, with IRI, 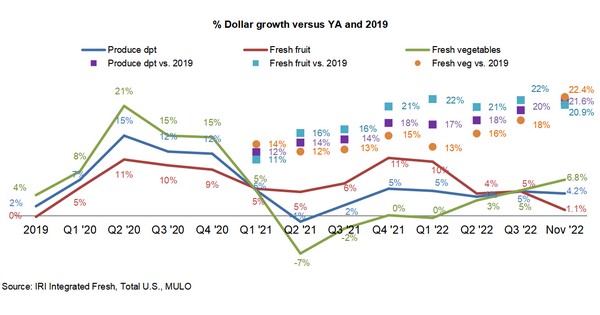 The price per unit across all foods and beverages in the IRI-measured multi-outlet stores, including supermarkets, clubs, mass, supercenter, drug, and military, increased 13.6 percent in November (the four weeks ending 11/27/2022). This increase was virtually unchanged from +13.7 percent in October.

Fresh produce prices were also up from last year but at a relatively low +5.3 percent level on a per-unit basis and +5.6 percent on a per-pound basis. This is far below the total store average. The deceleration is driven by fruit, for which prices increased a low +3.2 percent. Additionally, vegetable inflation dropped into the single digits, at +7.7 percent year-on-year.

In November 2022, fresh produce sales reached $5.2 billion, surpassing the record set the prior year by +4.2 percent. 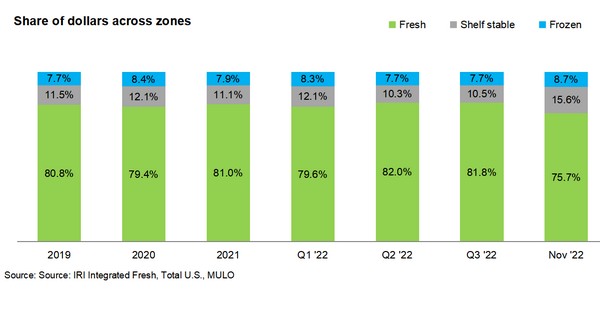 Thanksgiving week was one of the smaller selling November weeks, with produce sales peaking the week ending November 20th.
"Growth for fruit is slowing down due to moderating inflation levels," said Joe Watson, IFPA's VP of retail, food service, and wholesale.

Thanksgiving buying patterns, such as canned green beans, cranberries, and corn, in combination with the below-average rate of inflation for fresh produce, meant a drop in the share of fresh fruit and vegetables (75.7 percent) versus the share of frozen (8.7 percent) and shelf-stable (15.6 percent).

"Apples, avocados, and citrus came on strong in November," Parker said. "Whereas berry sales are double that of other categories in the summer months, apples are up there now with monthly sales of $372 million."

"Potatoes and onions trended in the top three sellers, and celery was the November newcomer bumping broccoli out of the top 10," said Watson.

The next report, covering December, will be released in mid-January.