After completing the construction of a greenhouse, the constructor might return to see how things go or for maintenance or service reasons, but projects are rarely monitored thoroughly unless it's at the introduction of an innovation that requires collecting more practical data. In that case, the constructor does monitor the greenhouse closely over a longer period of time. At TNO, efforts are being made to develop a way to monitor more greenhouses, referred to as 'Greenhouse Performance Monitoring' or 'Kas Prestatie Monitoring' in Dutch. Rick Gitzels worked this out as a trainee at TNO. Two greenhouse constructors have tested this out already.

For large bridges, amongst others, TNO already keeps monitoring the construction. In greenhouse horticulture, this isn't common practice yet. In practice, it's the grower who keeps track manually. Since more and more greenhouse components are connected to the internet, automatic remote monitoring becomes possible.

"Sensors and data from greenhouses are plenty, so that's not an issue," Rick pointed out while he was still a trainee. Currently, he operates in horticulture elsewhere. "We aim to gain insight in greenhouse performance, for example, by monitoring the homogeneity of the climate inside of the greenhouse, which could indicate whether the vents close well or not (locally). This is not only interesting for the constructor but also for growers, insurers, and investors. This stands out to us, but even more so to participants of the organization Stichting Hortivation. This involves an increasing number of Dutch greenhouse constructors and nowadays also technical parties."

A lot of work?
Greenhouse constructors that heard TNO's plans for the first time were surprised. "They pointed out to us that it takes a lot of work to collect all that data and create uniformity, that being their reason for not putting that effort into all greenhouses," recalls Egon Janssen, Senior Business Developer at TNO. "However, we point towards the KIS, where greenhouse technology is discussed in a single language. This makes greenhouse monitoring substantially easier."

Two greenhouse constructors are currently getting familiar with Kas Prestatie Monitoring, as TNO has devised. One of those constructors is Maurice Kassenbouw. Rick: "By continuing to monitor the greenhouse, they are able to validate their design and its performance. For example, does the greenhouse heating system meet the initial calculations, or are they showing an excess or performing under capacity? By comparing various greenhouse departments with the Greenhouse Performance Monitoring, potential defects become visible sooner, as well. For instance, identifying tardiness in installations. The greenhouse constructor, in turn, can reapply these learnings in new projects with similar circumstances."

Full picture
ICT specialist Fer van der Beele is closely involved with the project at Maurice Kassenbouw. This fall, the greenhouse constructor had its first experience with a Dutch cucumber grower equipped with the constructor's Air & Energy System. Eight sensors were suspended in the greenhouse, in places where the climate was most challenging, according to the grower.

From the beginning of November, the test continued in the project 'Kas Als Energiebron Hogedraad Komkommer' (greenhouse as an energy source high-wire cucumber). "We are very enthusiastic. Our goal is to connect as much technical data as possible to the records of the greenhouse. That shows the full picture, enabling one to better locate potential defects, for example, in greenhouse climate, and its exact cause."

Measuring on two layers
In the follow-up test at Botany, it became possible to measure on two layers, a wish from the constructor and cucumber growers. "Sensors are placed in both the middle of the plant and its head. In half a year, we intend to see the first results."

The greenhouse at Botany, built by Maurise Kassenbouw, is brand new. The in-house developed energy-efficient Air & Energy System is installed, too. The system is also used by various cucumber growers in the south of The Netherlands. "From the moment the system was used, we immediately saw a difference in the received data."

Insights from Kas Prestatie Monitoring in the follow-up test at Botany. Click here to enlarge

First steps taken
The goal of the test cultivation is to deal with energy as efficiently as possible. The Air & Energy System with energy-efficient fans and heat recovery is excellent for this, says Fer. "That's because it operates continuously based on momentary needs. The system's settings are such that the limits of cultivation can be pushed."

Greenhouse Performance Monitoring also enables the greenhouse constructor to compare greenhouses. "This way, we are able to see which greenhouse performs better. Currently, we lack these insights." The greenhouse builder joined the project of TNO early.

In the past, the builder took the first steps by himself, propelled by the interest of growers and the greenhouse builder in monitoring the climate data of the Air & Energy greenhouses. "Back then, we worked on our own with sensors to conduct measurements. At the time, this seemed to serve the interest of the grower foremost since he has a real affinity with the data. Otherwise, it doesn't really come to life, and you don't progress. We are convinced that this will be the future. If not now, then tomorrow." 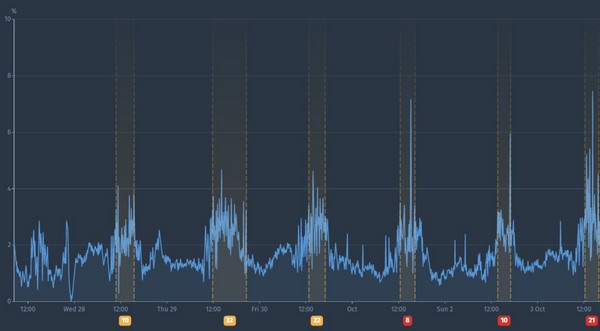 Insights from Greenhouse Performance Monitoring in the follow-up test at the Botany greenhouses. This is an example of set alerts and/or alarms presented as a graph over a certain period. Between the orange dotted lines, personally set values are exceeded. The amount in the orange plane indicates the number of alerts. The amounts in the red planes indicate the number of alarms. Click here to enlarge.

Dangers?
The question is whether greenhouse builders, in their relationship with the greenhouse owners, are waiting for all those detailed insights on their greenhouse.

Are they not afraid of claims or warranty issues? Egon flips this around: "On the contrary. It becomes clear where the error could lie. Is this the construction? Or is it caused by the grower's behavior? Or perhaps the circumstances? Greenhouse Performance Monitoring allows you to explain things, trace them and learn from them." Fer knows that Maurice Kassenbouw has considered the aforementioned risks. "We build high-quality greenhouses but continue to look for potential additions and improvements. To do so, you need to dare to measure and gain new insights."

Egon also flips 'the danger' of potential opposing interests between the greenhouse constructor and owner around when we present him with the example of an inhomogeneous greenhouse climate. "The temperature differences can have many causes: poor designs, defective installations, but also incorrect settings or poor maintenance is possible. Greenhouse Performance Monitoring allows remote and faster insights into the origins of malfunctions. If the homogeneity of the greenhouse climate declines, you can cross out causes by looking at the data. There isn't data on everything, such as a broken window, but keeping an eye on the data takes you quite far already. Furthermore, the implementation of artificial intelligence helps. Comparing situations is possible at a faster speed, as well as determining correlations, which allows for indications of issues such as a malfunctioning fan or heating tube."

Optimizing
Maurice Kassenbouw has already sold sensors to clients and is considering how the new insights and measurements can be placed on the market commercially. Another option is leasing sensors, says Fer. "The sensors will be placed in the grower's greenhouses for a certain period. The grower can even still buy the sensors later on. A lease reduces the investment and eases entry."

Independent of the eventual shape, the constructor wants to optimize together with the grower. "Even if we place a second greenhouse next to the previous greenhouse of the grower, they will never be one hundred percent alike. Especially the first year growers are curious about how they can cultivate best in their new greenhouse. With sensors and the insights derived from them, we can find answers to this question in tandem with the grower. The goal is to eventually finetune everything."

Personal dashboard
Additionally, Fer emphasizes the importance of the KIS. "Within KIS, it is easier to connect data from various parties. When lots of technical parties do this, this generates a much more complete picture of the technical installation. This was reinforced by the grower that we worked with. He believed there are still too many islands with data."

Fer, an ICT man himself, isn't afraid of ending up with too much data in a single dashboard. "You can easily structure your personal dashboard to your own preference so that all relevant data becomes visible to you at a glance. Furthermore, you can specify in great detail for which error you would like a notification. The results are positive and surprising and pave the way for a better climate, cultivation strategy, energy policies, horticultural greenhouses, and accessories."