More people are getting the 'blues'

In the United States, blueberries are the second-most produced berry, and their popularity has grown exponentially in less than 30 years – up from 45,000 tons grown in the 1990s to 339,000 tons in 2019. ARS researchers are working hard to help farmers keep up with consumer demand.

Researchers at the Horticultural Crops Production and Genetic Improvement Research (HPCGIR) Unit in Corvallis, OR, are developing new cultivars of not just blueberry but also blackberry, red raspberry, black raspberry, and strawberry to meet the needs of growers in the Pacific Northwest.

“In blueberry, we focus on improving the shelf life of fruit so that it reaches consumers with consistently better texture and flavor,” said Claire Luby, a plant geneticist with HCPGIR. “This also means developing new types of blueberries that are easier to harvest using mechanical harvesting equipment.” 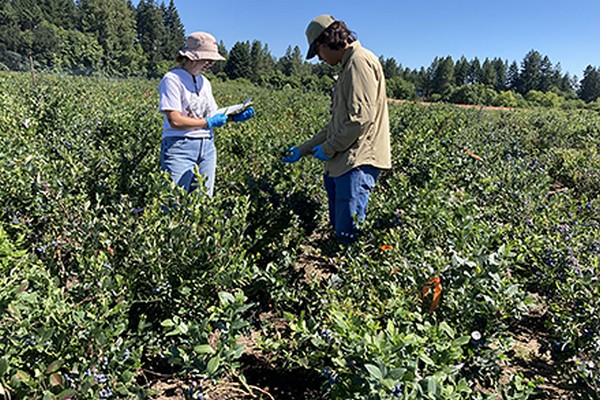 Blueberries are notorious for being difficult to harvest with machinery because they bruise so easily.

Perhaps a larger challenge for Luby and her colleagues is developing a cultivar that is resistant to a disease known to be a scourge of the berry: blueberry shock virus.

“We’re studying diverse blueberry plants to understand the genetic basis for blueberry shock virus, which can significantly impact yields for farmers,” she said. “Our hope is to use the insights from this project to develop new cultivars that are resistant, or at least more tolerant to, the disease.”

Blueberry shock virus has caused annual crop losses of 34-90% in the Pacific Northwest.

“The fruits that we focus on in this project are some of the most consumed fruits in the United States and contribute important nutritional benefits to consumers,” Luby said. The fruits are also economically important to the region, with Washington and Oregon being the nation’s top two producers.

According to Luby, researchers combine traditional plant breeding with genomics to find the right genetic mix for their disease-resistant cultivars.

Their plant breeding programs use traditional techniques of taking pollen from one plant and using it to pollinate a different plant with complementary characteristics. They then determine if the progeny of these crosses have the new characteristics that meet the goals of the breeding programs. In general, these techniques have been used in one form or another by people trying to improve agricultural crops for millennia.

“Where the genomics piece comes in is to try to improve the accuracy and speed of the plant breeding process,” Luby explained. “We are now able to obtain a lot more genetic information about the plants, and we can use that information to potentially predict whether an offspring of a given cross might have the characteristics we are looking for before we plant it out in the field. This is important because it can increase the speed of the plant breeding process.”

Traditional blueberry breeding can take more than 20 years from the time an initial cross is made to when a consumer might eat from a resulting cultivar.

“Our goals are to develop blueberries that require fewer chemical inputs to fight disease, which can be better for both the environment and for growers’ bottom lines,” Luby said. – By Scott Elliott, ARS Office of Communications