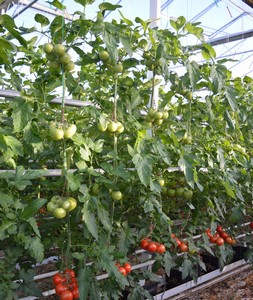 For the first time in years, the cucumber greenhouse of Dutch nursery Gerja holds tomatoes once more. In the village of Elsendorp, they decided to cultivate tomatoes in autumn and ended up with the Xandor breed from Axia.

Also, Tielemans Groentekwekerij, from the nearby town of Boekel, currently has the same breed in their greenhouses. While they are used to tomatoes here, they still have to get used to autumn cultivation again.

Therefore, Peter Bogaard and Jan Biemans, together with the advisors of Axia, keep a close eye on the cultivation. At the end of November, they met in a greenhouse in Elsendop, where the conversation quickly revolved around more than the cultivation technicalities of the autumn-cultivated tomatoes alone.

Photo right: All four bunches hang off the plant in the greenhouse at Gerja.

Late decision
The autumn cultivation of tomatoes follows quite a well-defined protocol. Nonetheless, small adjustments in the cultivation, which is relatively short for tomatoes, can have serious consequences. All the more reason for Marcel Kester and René Zwinkels of Axia to provide growers - next to seeds - advice, too. René: "We provide growers with a cultivation line."

A similarity between the two growers is that they both decided late this summer to go for autumn cultivation of tomatoes. At the end of July, after both ended up at Axia in their research for a suitable and available breed, they decided to start sowing. The tomato cultivation at Gerja started on September 13. Peter: "Our cucumber cultivation got a bit stuck due to issues with the Cucumber Green Mottle Mosaic Virus (CGMMV). That's why we decided on autumn cultivated tomatoes." 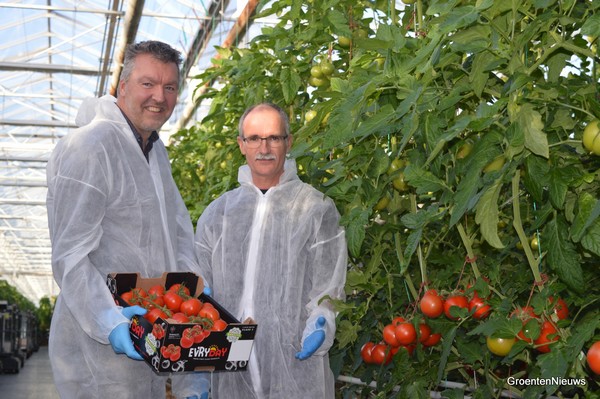 Harvesting until the beginning of 2023
At Tielemans, the autumn cultivation continues slightly longer. In the past, the growers also held grape cherry tomatoes in their greenhouse, but not this year. "We started the autumn cultivation a bit later this year," explains Jan. "It was choosing between cutting cucumbers for a week more or planting the tomatoes earlier."

With the high cucumber prices, the former proved successful this year. The aim is to harvest the last ripe bunches at the beginning of 2023. "Hopefully against good prices," smiles Jan, pointing out the expectation that during autumn cultivation season, prices will improve if the tomato demand becomes scarcer. 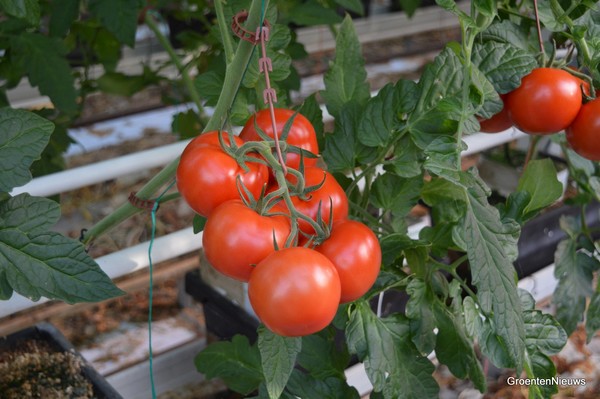 Heating hours
The last time Gerja held tomatoes in its greenhouse was in 2010. "Previously, we regularly ran into problems during autumn cultivation with the Pepino Mosaic Virus (PepMV). This time we're following another strategy." The men of Axia thought along on that strategy. An important part is the heating hours. "Those have to be 1180," indicates René. "We learned that the temperature isn't leading regarding good quality. Plant activity is."

Additional leaf off the top
Both growers grow cucumbers on high-wire. According to Jan, this made it easier to switch over to tomatoes. "We also grow the cucumbers a bit more systematically." Still, there are differences. For example, upon advice from Axia, the growers took an additional leaf off the top. "Normally, we don't do this," says Jan. It requires additional work but does contribute to the quality. "Since the Xandor breed is registered as a quality breed in the trade, we adopted this breed," says Peter. Marcel points out that Xandor, a large grape tomato, is seen as Elite in Belgium. The breed provides an average fruit weight of 125-150 grams. 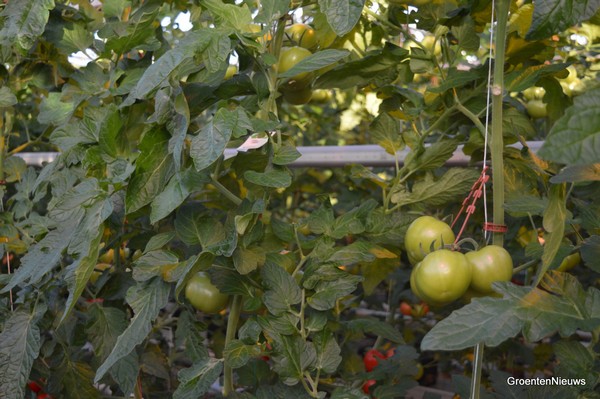 The greenhouse at Gerja is equipped with intermediate lighting.

Heating method
At Gerja, the first bunches gained color on November 24. Both growers agree that cultivation should be economical, but good quality cultivation requires a certain amount of energy; both literally in terms of gas and figuratively in terms of labor. Peter: "Our past experiences with virus issues taught us to work meticulously until the very last moment."

At Gerja, the average 24-hour temperature on November 24 was 14.2 degrees Celsius. The growers heated slightly more than usual since the plan was to empty out before Christmas but still ended on 1180 heating hours, just like Tielemans, where heating started up slower. 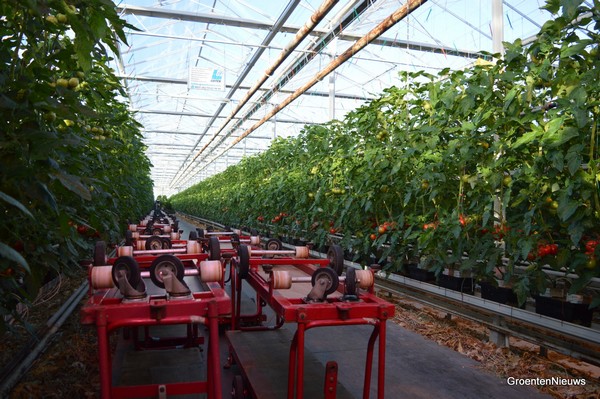 Topped plant
Not every tomato breed is suitable for autumn cultivation. It's important that the breed grows fast enough that the bunches develop and ripen in time. After October 15, the bunches should be on the vine. After that date, the bloom is no longer likely according to natural laws. Both growers chose a topped plant. A choice for speed as well. "A topped plant blooms at leaf six, an untopped plant only after leaf eight," shares Jan.

Growth in autumn cultivation
At Axia, they noticed a considerable increase in growers using Axia breeds for autumn cultivation. Marcel: "At last year's autumn cultivation, we had 8 hectares of Xandor in greenhouses and now 25. Of Macxize, a large grape tomato just like Xandor but with heavier fruits to an average of 170 grams, growers currently hold on a smaller surface commercially."

With custom advice and, hopefully, successful cultivation for all growers, the tomato breeding company hopes to realize further growth in this specific cultivation period. After this tomato cultivation, the growers will revert back to cucumbers. The choice for next year's autumn cultivation will follow later.