As fertilizer costs escalate, green crops could provide a viable alternative to capture and supply nitrogen for vegetable production. A study is underway in the Tasman region to quantify the amount of nitrogen captured from green crops and calculate the profitability for growers. The Rural Professionals Fund is funding the nine-month study, which is one of 12 projects nationwide to test innovative ideas.

Market gardener and former scientist Dom Ferretti has teamed up with Sustainable Nutrition consultant, Sjef Lamers, to carry out the trial on a Brightwater property. It will look at the effect of green crops such as tic beans, peas, broad beans, and lupins on a crop of potatoes.

Overseas data shows green crops alternated with large-scale arable crops can capture considerable nitrogen, but there is currently no New Zealand data. Dom says the time is right for work to be carried out for market gardening due to the increasing cost of fertilizer, environmental rules and regulations, and more rain events. 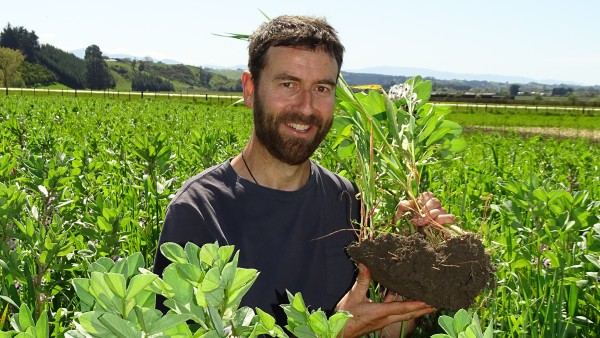 Dom Ferretti will be measuring the nitrogen produced by green crops

“If we can prove this is economic, we can get people over the line to try it,” Dom says.

By taking soil samples and plant biomass samples, they will be able to work out how many kilograms of nitrogen per hectare is produced by green crops.

Green crops capture nitrogen out of the atmosphere and draw it down into the soil, which is known as nitrogen fixation. Pastoral farming uses plants such as clover for nitrogen fixation – something Dom says vegetable growers could use more as well.

Alongside the project, a series of measurements will be captured to indicate what is happening to that nitrogen, whether it remains in the soil profile or leaches into the groundwater. While those measurements will be outside the scope of the funding and timeframe of the project, Dom says gathering that information will identify whether there is potential for further research.

The project will use potatoes because it is easier to measure yield, comparing a control crop with crops of potatoes grown alternately with two types of green crops. The theory is that green crops will produce a higher-yielding crop of potatoes.

Dom uses green crops regularly in his small organic market garden and says they do not interrupt his crop rotation.

“It’s all about planning a crop rotation, and there’s always downtime when there are weeds growing, so we want to operate within that band,” he says. “You don’t do the whole farm at once, and you don’t miss any planting dates due to it.”

He says most vegetable growers have large enough operations to trial areas of green crops and see the results.

Growers will need to buy seed – which is grown in New Zealand and is available at a reasonable cost – and use a tractor to sow the seed, but if those crops provide renewable nitrogen to the soil, then it could be financially worthwhile for growers to include green crops