In a time where inflation, labor shortage, material shortage, carbon emissions laws, electricity cost, cost of goods, etc., are making it tough to be a grower, Green Machine Nursery has found a way to thrive.

Fessler Nursery sells its finished foliage and spring annual crops primarily along the West Coast in Oregon, Washington, California, and Alaska. The company is looking to expand its sales into Nevada, Idaho, and Montana. Spring annual rooted liners are sold through brokers, with most of the plants shipped to growers in Oregon, Washington, and Idaho. Some of the liners are also shipped to the Midwest and East Coast, depending on the broker.

"All of our spring annuals are produced from vegetative cuttings," Fessler said. "About 80-85 percent of the foliage plants are produced from cuttings as well. More recently, as tissue culture has become more available, we have switched a lot of crops over to TC. We used to buy a lot of foliage liners out of Florida. As freight costs skyrocketed, that kind of pushed us to do more of our own propagation in order to be more efficient with our freight and packing. It looks like we will be using tissue culture in the future. 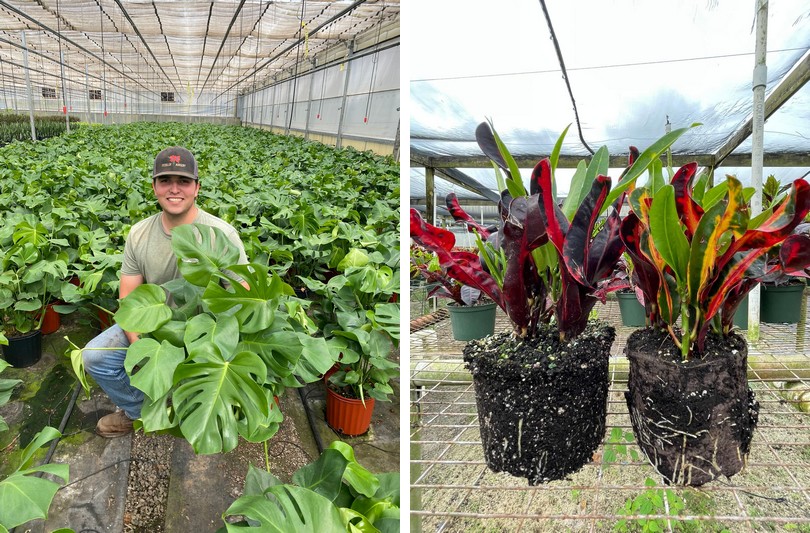 Left: Tanner Fessler, who is production and sales manager for tropical foliage at Fessler Nursery, is starting long-term crops, including pothos and philodendron, with rooted Ellepot liners in Air Trays shipped from Green Machine Nursery in Florida. Photo courtesy of Fessler Nursery

Propagation area
Fessler Nursery has a propagation area set up for rooting the cuttings and maintains some of its own mother stock plants. Cuttings are purchased from different propagators in Guatemala, Costa Rica, and Indonesia, where they specialize in specific crops.

Fessler Nursery's foliage propagation area is equipped with heated concrete floors. The standard rooting time for most of the foliage crops is eight to 10 weeks.

"During the summer, there is a lot more growth due to the warmer temperatures and longer days," Fessler said. "During winter, with shorter days and lower light intensities, we won't see as much leaf growth, but the rooting times are good because of the heated floors."

Challenges of propagating, growing foliage
While Fessler Nursery propagates the majority of its foliage plants, there are some species that have a long production cycle.

"For our 6-inch pothos hanging baskets, if they were planted during the winter, they would take 12-15 weeks minimum before the cuttings would be fully rooted and ready to hang up in the greenhouse," Fessler said. "Then it takes another 12 weeks of production time before the plants would be trailing and ready to sell. It would be a minimum of six to eight months to produce a crop during winter."

"The foliage varieties that are more difficult to grow, we also plant in 72-cell trays," Fessler said. "If they are easy-to-grow varieties, then we start them directly in 4-inch pots."

"We buy these large specimen plants in from Florida because some of these crops would take us years to finish for the sizes our customers want," Fessler said. "Sometimes we buy in prefinished plants, which are not up to size for us. We grow these plants a little longer and then sell them. Other foliage plants we buy in and maintain in the greenhouse to be sure they are disease- and pest-free. On average, it takes six to seven weeks minimum before we consider shipping the plants to our customers." 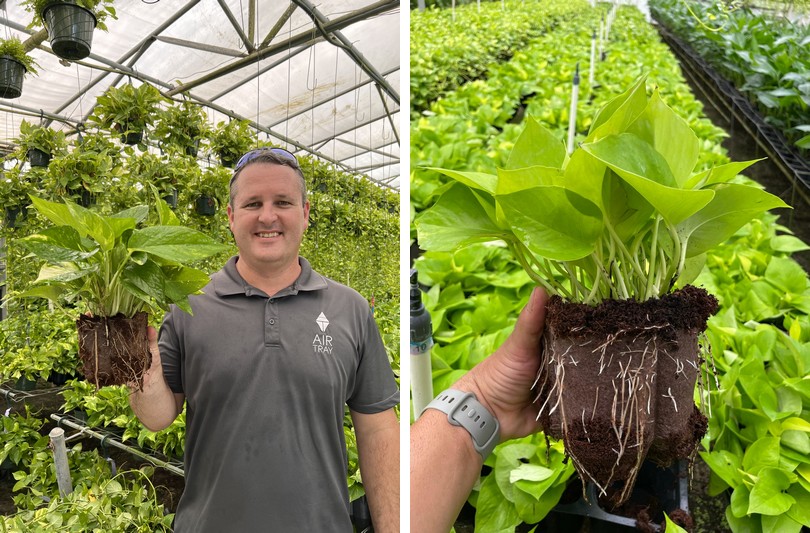 Looking for alternatives to rooted cutting
Because of the inconsistency of some of the foliage cuttings coming from offshore propagators and the time it takes to produce finished crops, Fessler Nursery began looking for alternative ways to grow some of its long-term crops, including pothos and philodendrons.

At this year's Tropical Plant International Expo (TPIE), Fessler was introduced to Green Machine Nursery in Winter Garden, Fla., which showed its foliage liners in 10-count and 8-count Air Trays. The Air Trays hold 80-mm and 120-mm Ellepots (equivalent in size to 4- and 6-inch plastic pots.)

"We realized that if we continued to propagate our own cuttings, we wouldn't be able to offer a full line of pothos and philodendron because of the long production times," Fessler said. "Also, because the rooting was so spotty and the crop times were so long during the winter, we would back up production in the spring."

Before Fessler purchased any Ellepot liners from Green Machine Nursery, he looked at the cost of buying prefinished plants from Florida.

"I ran the numbers on what we were paying for cuttings of pothos and philodendron, and it was really a no-brainer to buy the Ellepot liners from Green Machine," he said. "We determined our costs for growing the plants, how long it took for us to finish a crop, what our lead times were, and our gaps in production." 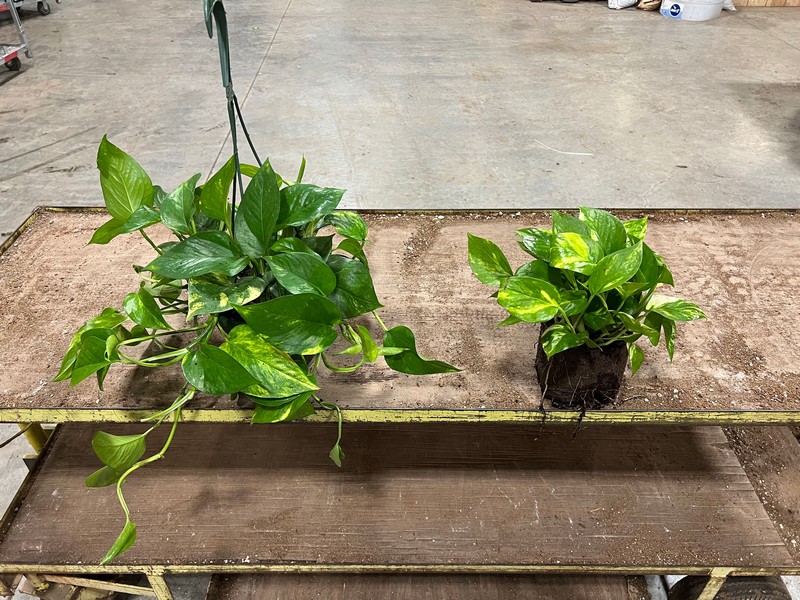 Fessler Nursery plants the 80-mm Ellepot liners into 4-inch pots and the 120-mm liners into 6- and 10-inch hanging baskets and then adds additional plant growth before selling them. 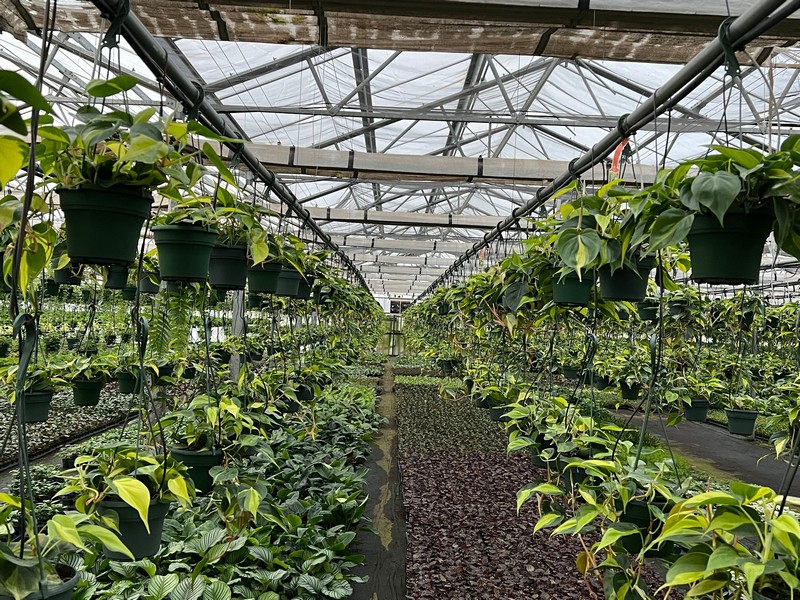 Starting with the Ellepot liners of pothos has enabled Fessler Nursery to get an additional three to four turns in its greenhouses while using half the space. Photo courtesy of Fessler Nursery

Benefits of Air Tray liners
Fessler Nursery received its first shipment of Ellepot liners from Green Machine in June 2022. The shipment included pothos and some other species planted in 80- and 120-mm Ellepots.

"We were able to transplant the 80-mm Ellepots of pothos into containers very easily," Fessler said. "The plants were already well rooted, so we only had to allow them to acclimate to our greenhouse conditions, and then we sold them three weeks later.

"If we had started a 4-inch crop of pothos beginning with our own rooted cuttings, it would have taken a minimum of 10 weeks before we would have been able to even consider selling them."

Because of the Air Tray design, the Ellepot liners produce a massive amount of feeder roots. Starting with Ellepot liners allowed Fessler Nursery to reduce production time by seven weeks.

Another benefit of planting the Ellepot liners in Air Trays is the number of crop turns Fessler Nursery is able to cycle through its greenhouses.

"Starting with the Ellepot liners will enable us to get another three to four turns in the greenhouse while using half the space," Fessler said. "When we root our own cuttings, it takes up a lot of propagation area and greenhouse floor space. These plants would normally have to be on the floor for a minimum of three months."

Now that Fessler Nursery is starting with Ellepots liners in Air Trays, a 120-mm liner can be planted into a 10-inch basket, and it takes less time to finish than what it used to take for a 6-inch basket started from its own cuttings. This has allowed Fessler Nursery to offer its customers more container sizes. The Ellepot liners that Fessler Nursery receives from Green Machine are basically prefinished plants that can be dropped directly into finished pots.

"Ellepots have allowed us to offer 10-inch hanging baskets of pothos," Fessler said. "We don't usually offer a 10-inch basket because it takes so long to finish. If we tried to produce a 10-inch basket from our own rooted pothos cuttings, it would be a 12-month crop. Our garden center customers want a nice looking, big full container, and that was something we weren't able to offer because of the lengthy production time." 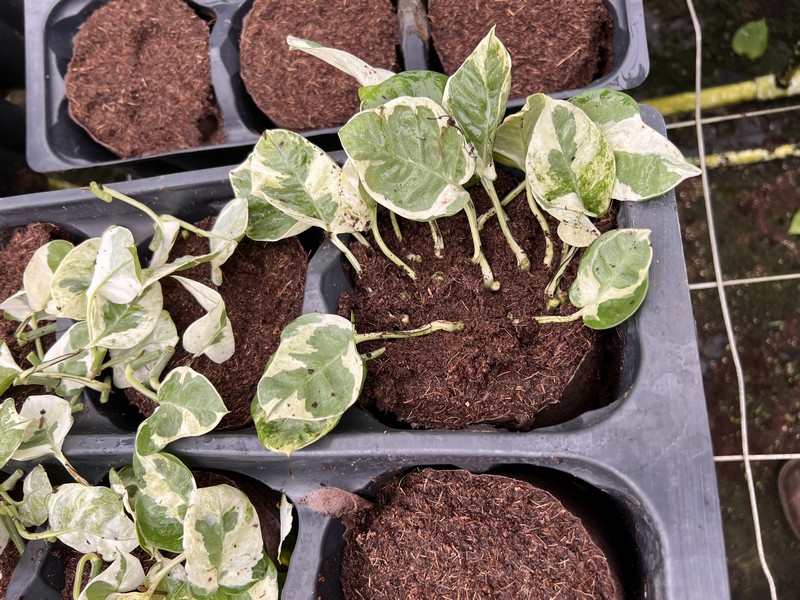 Another benefit of the Ellepot liners in Air Trays is the time eliminated for sticking cuttings.

"The biggest benefit came in the reduction in propagation time," Fessler said. "It took a long time to stick the cuttings and to grow them on. The sticking quality could be inconsistent, and we could lose some cuttings during propagation, especially if we moved them off the heated floors too early to push them to put down the next plantings.

When Fessler ran the numbers, it made sense to switch to Ellepot liners in Air Trays.

"It didn't cost us anymore because we are able to deploy our labor force in other areas rather than having so many employees sticking pothos cuttings every other week," he said. "Our employees can drop the Ellepot liners into 4-inch pots and 6-inch hanging baskets and then move the containers into the greenhouse to finish.

David Kuack is a freelance technical writer in Fort Worth, Texas; dkuack@gmail.com