"Why don't we hear about this?"

Dutch Horticulture youth looks to connect around the topic of energy

The phenomena of 'horticulture youth' is well known around the Dutch Westland and Oostland regions in which two clubs have even formed around those demographics, Tuinbouw Jongeren Westland and Oostland. Together the clubs consist of a few hundred members. Regularly, these young people meet each other in greenhouses, at gatherings, or around the meeting table. Recently, a gathering took place on the topic of energy. Quite striking was the fact that horticulture youth from far more areas attended the location at their host Anthura than would usually be the case.

Around fifty young people were presented during the afternoon filling program on energy organized by the horticulture youth themselves in collaboration with Glastuinbouw Nederland.

The four speakers were thanked by the horticulture youth.

Shifting gears
Hans Barendse, location manager at Anthura, kicked off the afternoon after an opening word by Rick van Schie of Tuinbouw Jongeren Westland. He spoke about what Anthura does. "We believed our portfolio to be too small and recently added bromelia as well." He then moved on to talk about energy, as it was the afternoon's theme.

What is important to the breeder, propagator, and producer of these orchids, anthuriums, and bromeliads, is that all the company's greenhouses are connected for energy. This could be a solution, especially now that energy is very expensive. A mix of various energy sources enables growers to shift between the best option for that day. Every day at 8 AM, the direction is set for that day, and all energy taps are adjusted appropriately. This is currently still done manually. 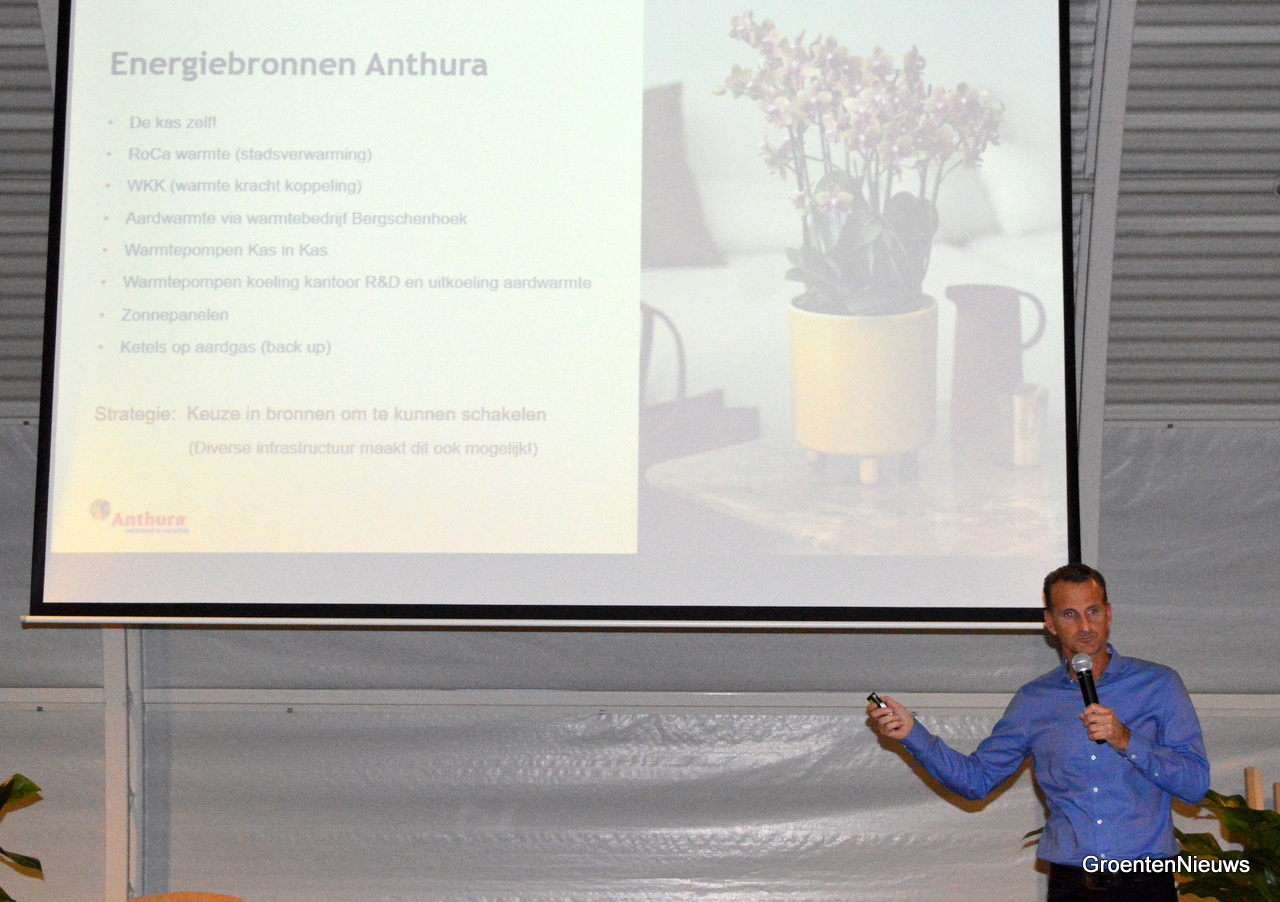 New energy sources
In reaction to the increasing energy prices, Anthura pays even more attention to energy use. The familiar step that the grower took was switching to LED. In terms of breeding, species that are more suitable for energy-conscious cultivation are being taken into account. Hans also mentioned that Anthura is researching new forms of energy.

Mainly hydrogen is being seriously considered by the company. The location manager shared that conversations are taking place, including with the Gasunie. The grower seriously considers producing hydrogen itself to operate on CHP. Also, nearby hydrogen pipes are taken into consideration. With a bunch of growers, Anthura could possibly both purchase hydrogen and supply it.

Hydrogen
The second speaker, Martien Visser, was immediately asked about his opinion on hydrogen by Remco de Boer after Hans's presentation. Remco certainly was the one to present the afternoon and instantly got the audience moving with questions regarding future projections of attending horticulture youth. Luckily, no hands were raised at the question of who thought that their company wouldn't exist in a few years.

Anyway, back to hydrogen. Martien, professor of energy transmission at the Hanzehogeschool Groningen, eased some of the expectations about the topic. On the one hand, because hydrogen is currently very expensive (similar to the current prices of natural gas), and on the other, because the necessary infrastructure isn't there yet. However, Gasunie, where Martien also works as Manager of Corporate Strategy, is working on developing such a network. In particular, by changing natural gas tubes for ones meant for hydrogen. Whether that makes hydrogen the solution? No, Martien doesn't think so.

Why don't we hear about this?
Just as his increasingly popular Twitter channel, in his presentation, the professor pointed to various facts regarding energy and its transmission. He showed that Europe achieved all the targets set for 2020 on renewable energy, reduction of greenhouse gas emissions, and energy savings. The Netherlands also met its goals for that year. "Why don't we hear about this?" was a question from the audience. Martien found this remarkable as well and expressed criticism on the role of the media in this regard.

As an expert in energy, he also dove into the current market situation. With multiple graphs, he showed the price development of the past six months, both for gas and electricity. "We traded our dependence on Russia for a dependence on the United States and Qatar" was one of his statements. Like "Every lockdown in China is a win for us," through which he wanted to illustrate that we currently experience ample competition in liquid gas from Qatar. Asia exercises its strength on it and Europe as well. The question remains; who's stronger? One way or another, China is definitely a formidable competitor in this struggle. What could help is if the demand for gas decreased there because of lockdowns. 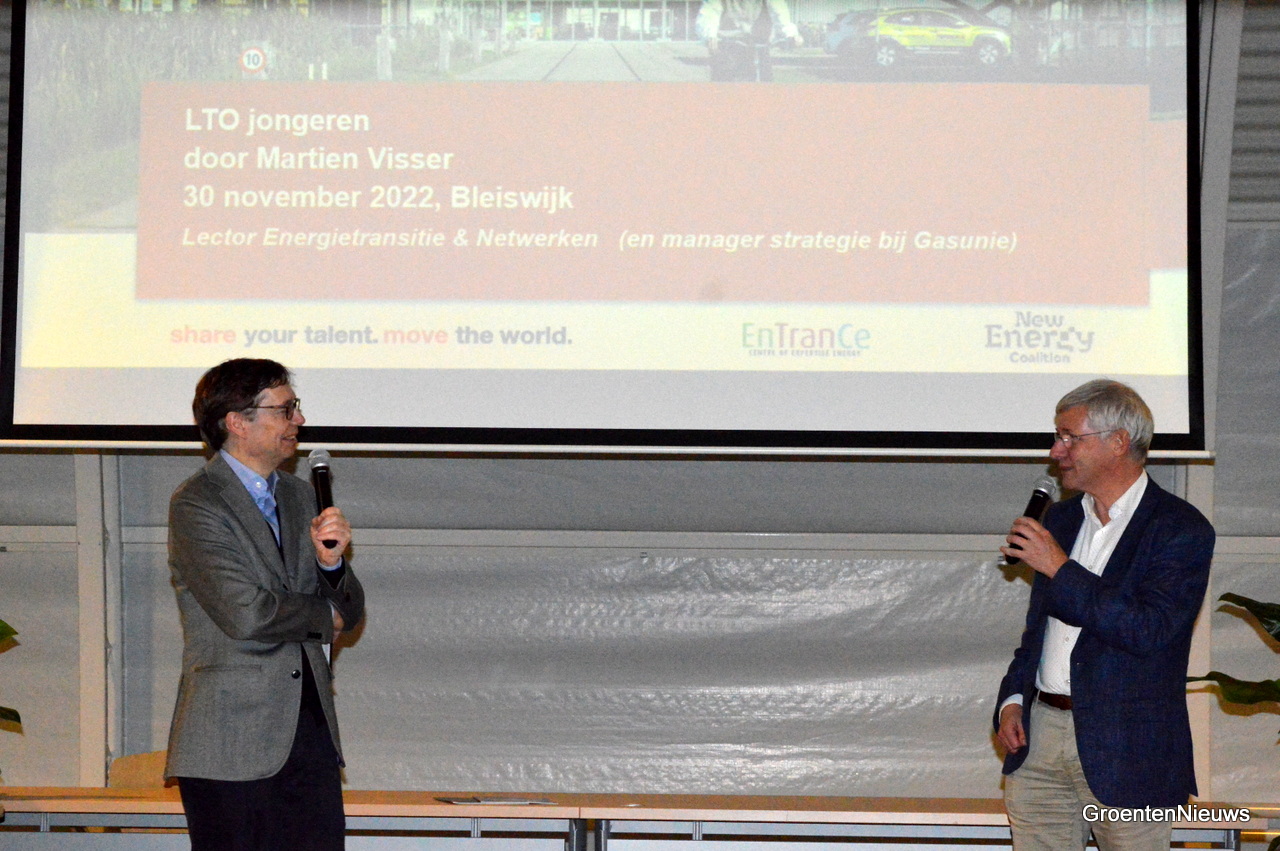 Making real predictions is a difficult task, even for the best energy experts. However, the prediction that Martien did dare to make is that the gas prices from before the summer of 2021 most likely won't be coming back. This makes it so that greenhouse horticulture looks explicitly towards the government to keep the industry standing.

Lack of expertise
Aileen de Witte is a lobbyist for Royal FloraHolland and seeks attention from the Dutch government for her industry: ornamental horticulture. She sees herself as a kind of mediator between business and government. In a conversation with Remco, she talked about her lobbying activities - "I have recently had lunch with the parliamentary party of 'Forum voor Democratie,' but haven't been able to do so with 'Groenlinks,' yet" - and the political knowledge of her industry. "Nobody knows anything" was her harsh verdict on the industry knowledge of an average member of the Dutch House of Parliament. She followed this with the nuance that members of parliament also need to grasp a plethora of subjects.

At the end of the afternoon, six statements were discussed by Remco, Aileen de Witte, Martien, and Hans.

The lobbyist pointed out to the audience that over fifty percent of the Dutch legislation is a direct result of European legislations. Therefore, Royal FloraHolland also has a lobbyist in Brussels and Strasbourg, similar to, for example, Glastuinbouw Nederland. At any rate, her work isn't merely focused on The Netherlands. Aileen hinted that auctions take into account trading complications in case the situation between China and Taiwan escalates. However, the two biggest challenges for the industry that she currently sees are energy and crop protection.

Future prospects
After the speakers, it was time for a discussion using a series of questions. Here Remco managed to get quite a lot of audience members in front of the microphone, and he himself also didn't shy away from expressing a critical view of the future of the industry. One of the topics addressed were future prospects, on which the audience appeared divided. Some can imagine that prospect while others can't or at least have their doubts, and the fact that that very day a new covenant was signed between the industry and the government didn't take away those doubts either. Actually, people seemed quite surprised with the covenant. This became one of the hot topics during the drinks and buffet that followed. 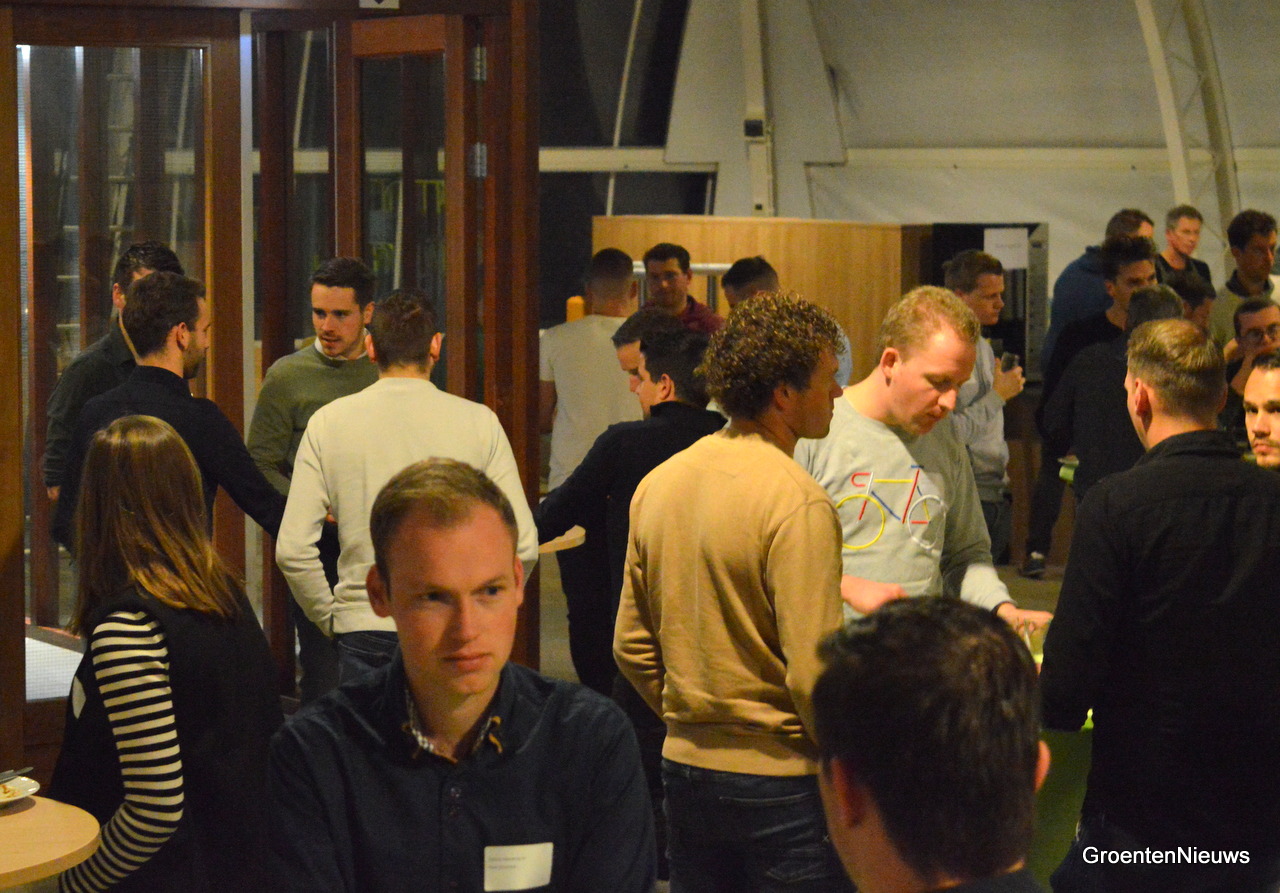 Not all members were called from Westland and Oostland - deliberately - to create space for horticulture youth from all over The Netherlands. During the drinks and buffet, they were able to talk about the program, meet like-minded people and get to know each other.