Seaweed grower seeks greenhouse: "The hardest part is already on board"

Alwin Kool and Michel Trommelen of SeaweedTech were so close to finalizing scaling up seaweed cultivation under glass with a Dutch grower. So close, but not quite there. Because then the energy crisis broke out. The grower decided not to participate after all. Since then, the company has been looking for a new greenhouse, possibly with an innovative horticultural entrepreneur who, like the founders of SeaweedTech, sees a future in this special crop. 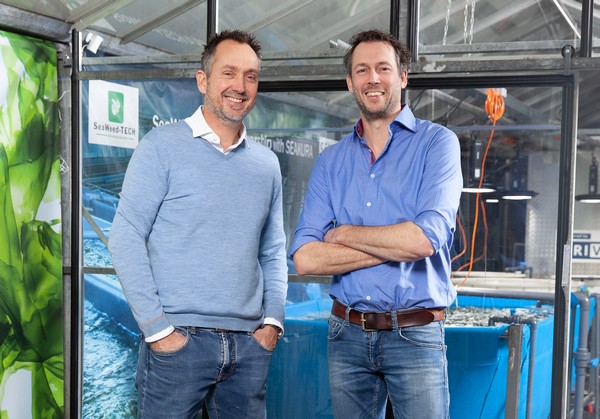 Alwin and Michel in their demo greenhouse in Amsterdam

The first steps have already been taken towards this remarkable cultivation under glass. A small greenhouse was erected in the Amsterdam harbor area (convenient, as there is plenty of seawater) for testing. In the greenhouse, which is 30 meters long and one roof wide, the growers successfully cultivated sea lettuce (Ulva lactuca) for 1.5 years in a fully controlled environment. Alwin: "We can keep the temperature in the greenhouse constantly between the required 16 and 18 degrees Celsius and simulate perfect June 20th sun with LED lighting. That way, seaweed grows well and fast, so we develop maximum biomass of hallmark quality." 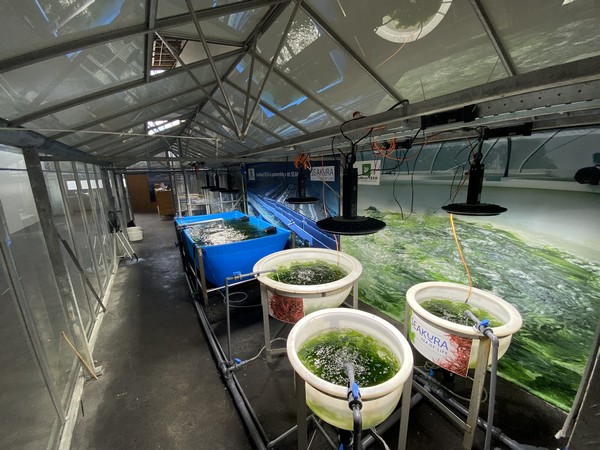 Exploring growth market
The seaweed produced by SeaweedTech is 'vegan-friendly' and complies with the EU organic label. "That is also one of the reasons why, in our view, it is a product with huge potential." Gradually, consumers are already discovering seaweed as a food, Alwin observes. "It is going in the right direction step by step. In Asia, it is already very well known, and the product has the necessary applications."

For its part, SeaweedTech, which imports seaweed from products on land in Israel in addition to growing its own, is investing in opportunities for processing seaweed in powder or flake form in products such as licorice, bread, pasta, and peanut butter but also a face mask. All the aforementioned products are already on the market, mainly in powder or flake form, and hard work is being done to set up a fresh market, but this requires local production. "We are doing risk spreading. We have yet to discover what will work best. Based on volume and price, we will then fine-tune which niche it will be."

Klepper & Klepper's most recently introduced licorice is spicy salt flavor. The licorice is available in several countries, and SeaweedTech's seaweed is in it as a salty additive.

Growing on land gives control
The ambiguity that there can be about how seaweed is grown from the sea is overcome by the Dutch growers by doing it on land. To do this, they use an existing Israeli patented cultivation technique. "Growing on land prevents any harmful substances found in the sea from also entering the seaweed. Also, with us, there are no 'animals' swimming around the seaweed. On the allergen side, this also prevents problems. You won't come across any traces of lobster in our product, for example." 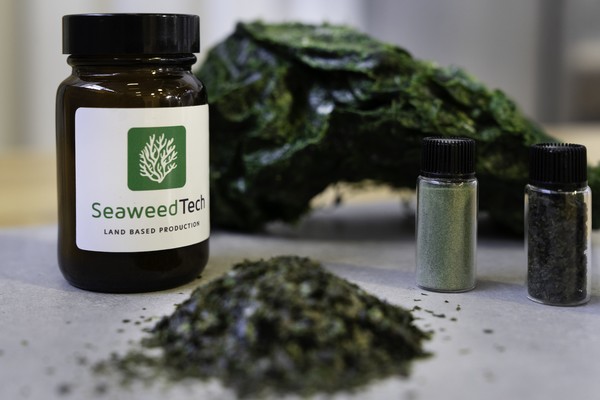 Optimal conditions combined with selecting the best-performing species to ensure a consistently high-quality product. "In this way, we can meet the high standards with regard to heavy metals, organic and biological pollutants and thus cultivate seaweed to customer specifications. At the same time, we aim to minimize our (environmental) footprint through Minimal Impact Farming, which uses smart technology to reduce energy and waste streams and reuse them wherever possible."

Two and a half years ago, Alwin and Michel started their seaweed business. With the small demo greenhouse already mentioned, the aim was to show interested parties in advance what is possible. COVID threw a spanner in the works in that respect. On the positive side, two partners were soon found in the form of Priva and Seakura. Seakura supplies the patented cultivation technology, and Priva helps the growers with its expertise in climate and water technology.

Schematic representation of cultivation company when scaling up

From 500 square meters to 1 hectare
In January this year, the demo phase was over, and phase 2 was due to start: scaling up with a larger greenhouse. Now that this has not yet succeeded, the seaweed growers have chosen to go public anyway. "After ten months of searching, we now think things are moving too slowly. So we decided to put on the table what we do and what we can do. We need a greenhouse for that, and at the same time, we are looking for like-minded people who really want to participate." Meanwhile, the landweed growers have secured an innovation loan from Rabobank and secured several provincial and national grants.

But what exactly are the growers looking for, and what is actually needed to grow seaweed under glass? "We do have a list of requirements," admits Alwin. This is because, for example, seawater is needed. "For the pre-commercial production phase we want to enter now, we are looking for +500 square meters of growing space. After that, however, we want to scale up to 1 hectare. For 500 square meters, we can still bring seawater to the greenhouse, but when scaling up further, the greenhouse has to be really close to the sea." 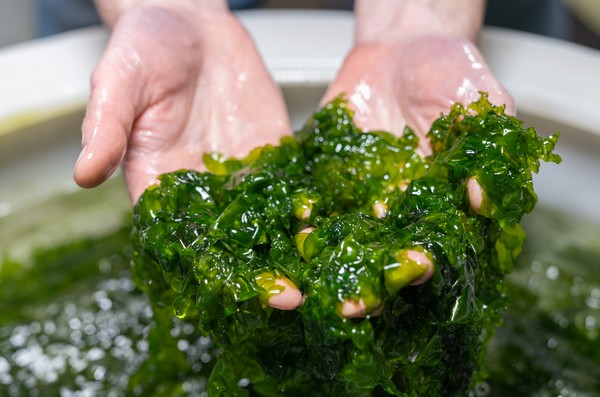 Supply of seawater
Supply of seawater is one thing, discharge is another. "We also need a lot of seawater at the back end of seaweed production. Discharge to the freshwater network is not allowed. Therefore, an efficient water recirculation system is needed. With this, we filter the seawater so that we can use the same water for a long time. However, some of it also evaporates, and you have to change the water. Seawater contains elements that the plant extracts. You cannot replenish those elements yourself artificially. Changing a few percent a day is still substantial for larger volumes."

Alwin points out that transporting large volumes of seawater to zoos, among other places, does happen, yet in phase 3, the commercial phase with the 1-hectare greenhouse, SeaWeedTech prefers to use pipeline supply. "Reason for us to now look at coastal port areas when scaling up," he says. Talks are also ongoing here, says the co-founder of the seaweed company. "But you also have to deal with a greenhouse that cannot be blown to pieces by the wind. That makes growing in a greenhouse on the Maasvlakte challenging, for example." 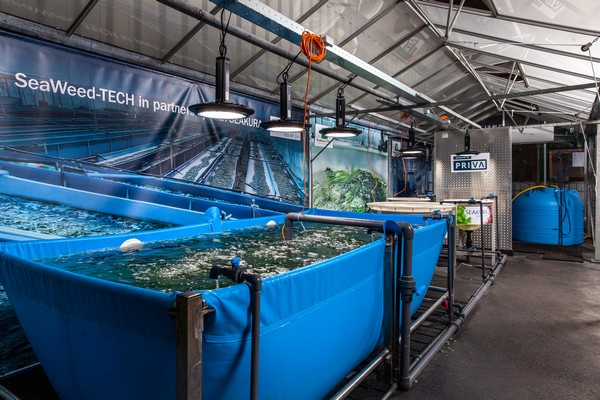 Energy use
In the early stages, growing in an environment completely sealed off from sunlight was also considered. "At the first grower we were in talks with, there was a greenhouse with solar panels on top. Below that was all space for water tanks for seaweed, but no light. LED lighting had to go with that, but at today's high electricity prices, it couldn't be done."

SeaweedTech is therefore really looking for a greenhouse and rules out cultivation in an indoor farm, for instance. The greenhouse for phase 2 does not necessarily have to be the same one where the scale-up to one hectare takes place. Integration of seaweed cultivation in a greenhouse with another crop is quite possible, according to Alwin. 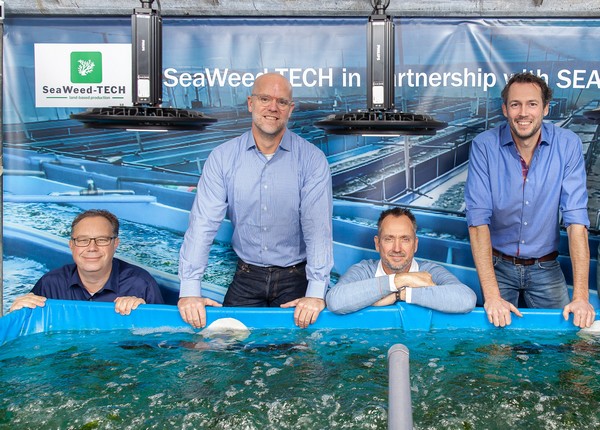 Another item on the wish list, though, is for the greenhouse to have a heat pump. "That does have our preference in any case because, with the current high energy prices, we prefer not to heat nor cool. Many innovative growers are already working with heat pumps. With these, we can keep the greenhouse at 18 degrees Celsius." Furthermore, the growers want to add CO2, also via water. "With that, you can make the plant grow extra fast."

Building its own greenhouse is also an option for SeaweedTech, just not in phase 2 for "only" 500 square meters. "With the 1-hectare greenhouse, it could be an option, also because then we can technically design the process all by ourselves." Skipping one step, however, Alwin believes is "not opportune." Moreover, additional funding would then have to be raised. "We want to show now, with the plan in place, what can be done on a large scale in the greenhouse. We already have the hardest part on board because that is the funding and technology of our partners."