Among the pathogens that affect basil today, downy mildew certainly plays a leading role due to the enormous damage it can cause to the cultivation of this important herb, so much so that it has earned it the title of 'basil killer' over the years.

The return of this fungus in the form of a new genetic variant, consequent huge production losses that characterized basil cultivations in the last season, and the fact that the only way to limit the damage caused by the pathogen seems to have returned to the use of preventive treatments. These are some of the reasons that have prompted the seed company Fenix to increase systematically the unique bond with Genesis Seeds - an Israeli seed company with a growing efforts and investments in the research of hybrid basil varieties based on a collaboration with the phytopathology team of Bar-Ilan University.

This unique partnership has led to the recent visit of some of the most representative characters of the Italian basil industry to the Genesis Seeds facilities in Israel. Along this visit, growers were exposed not only to the new basil developments but also to the sophisticated research at the Bar-Ilan University, seed production, and logistics, all within a complete cycle to bring the highest quality seeds to the Italian growers. 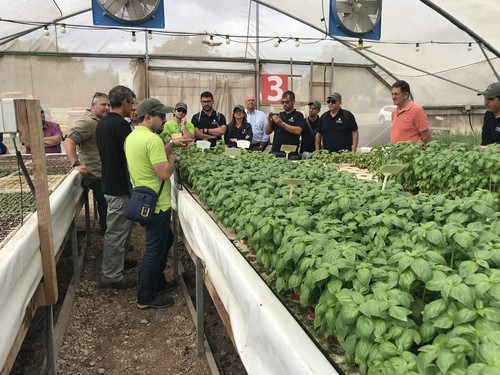 The group visiting new hybrids tested in a hydroponic farm. Like the current range available, many new hybrids have been designed in order to being able to meet the needs of many different typologies of growers, like those who grows for the fresh market, but also pot producers and processing ones.

This well-established cooperation between the two seed companies, which has already led to the birth of the well-known Prospera range and to its spread on the Italian market, where it has established itself among the leaders in the sector thanks to the excellent organoleptic qualities such as aroma, leaf shape, color, etc., and the important genetic resistance to the Fusarium of basil and to Downy mildew, was of fundamental importance during the new process of research that will bring new hybrids with advanced resistance to downy mildew.

In response to this new dangerous presence, Genesis Seeds and Fenix reacted strongly, working tirelessly 24/7 to present new hybrids which will carry a better resistance to Downy mildew and Fusarium while maintaining the same organoleptic characteristics and resistances that have contributed to the success of the Prospera range.

"When it comes to research and genetic hybridization, the real challenge is not only to find the answer to new needs but to be able to transfer it through new hybridization processes without losing the qualities that have marked the success of previous varieties. In this issue, Genesis Seeds has always proven its skills during research activities with basil and other crops,' says Francesco Loprevite, Co-founder of Fenix and R&D Director. 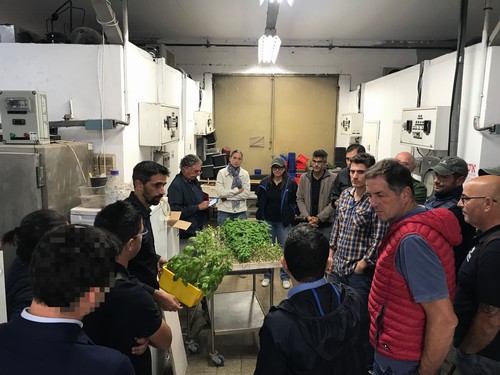 During the visit, the group had the possibility to visit also Bar-Ilan laboratories, where researchers explained some of the processes that characterize their work

"On the other hand, it is also true that research in the laboratory would be much more difficult and time-consuming without the guidelines that are the result of the research activities that need to be carried out in the field, such as the evaluation of new varieties under different conditions and environments and the selection of the best hybrids to be carried out in the different areas and segments to meet the multiple needs of the markets, and in this FENIX has shown particular sensitivity and competence by making choices that have proved to be successful over the years, demonstrating the ability to achieve the goals we had set and more, both within the Italian market and in some areas of other countries, laying the motivational and economic foundations to allow us to keep investing in this direction," says Michal Amichai, VP Sales and Marketing of Genesis Seeds.

As soon as the new varieties, which demonstrated an advanced resistance, were obtained, Fenix and Genesis Seeds considered it crucial to invite some of the most representative players in the Italian basil production (both fresh cut and pot producers), processing, and marketing chain directly to Israel for what was an exquisitely technical visit, with the aim of showing the trials of the new varieties directly in the field and, at the same time, illustrating some of the research methods that have been used during the process of obtaining the new hybrids at Bar-Ilan University, which has already taken steps to get the patents that can protect the varieties when they reach the markets. 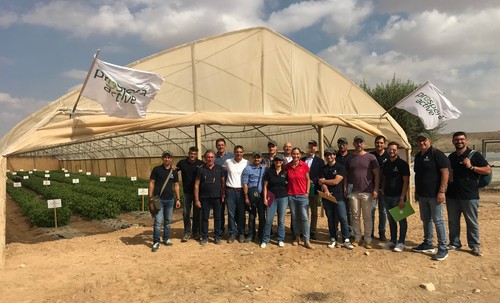 Some of the Italian basil chain representatives together with Genesis and Fenix teams, in front of the screening of the new hybrids at Genesis' facilities

Among the many topics presented by the Bar-Ilan researchers, it is important to point out a very interesting phylogenetic study on the origins of Peronospora belbahrii and its evolution. In fact, the researchers analyzed samples from Italy have shown how it is derived from local selective pressure as the DNA of the fungus differs genetically from other forms occurring in other countries around the world. During the visit, interesting alternative methods of containing Downy mildew were also illustrated, and a focus was made on the dynamics of epidemics in general and their response to the environment and chemical treatments.

"Given the urgency of finding new answers to the needs of the supply chain, we felt it was of fundamental importance to involve some of its most representative players from this phase, which is placed between the end of the trials and the beginning of the pre-marketing of the new varieties, in order to enable them to immediately evaluate the results achieved and to start making the first selections on the hybrids, while at the same time trying to convey the volume, quality and value of the research work behind every single seed, both in the laboratory and in the field,' says Ivana Marchese, Co-Founder, and CEO of Fenix.

The fully positive feedback from the participants has confirmed the expectations of the Sicilian seed company, which will start distributing the first samples to be tested on Italian fields as soon as the patenting process is completed before moving on to the commercial phase.

Considering the limited availability of samples, those who would like to do some tests are invited to report it right away by sending an e-mail to secretary@fenixseeds.com.