The Dutch greenhouse multiple strawberry crop season is nearing its end, and the first imported strawberries are entering the market. Sjraar Hulsman of Frankort&Koning takes stock. "Whereas in recent years, lit greenhouse strawberry cultivation expanded sustainably, growers are now taking a step back," he begins.

"Most parties had good fixed programs in the last greenhouse season. Besides the UK market, usually a good buyer, other countries also competed well. However, like in the spring, energy prices made it challenging to set price levels that worked well for growers as well as customers. Both of these sides were, therefore, cautious."

"Clients, after all, saw that last spring, when prices were high, fewer people bought strawberries. So, more parties opted for weekly rather than fixed prices. That makes things less stable but, at certain times, helps put more volumes on the market," Sjraar continues.

He says the energy crises minimally affected the fall crop volumes. "Growers order those plants a year ahead. Some growers planted earlier to avoid high heating costs. The picture varies quite substantially per grower, depending on, for example, their gas position and CHP."

"Also, due to the beautiful fall weather, growers used considerably less gas. However, the greenhouse strawberries had far more fruit rot pressure than in other years. By heating less, the crop remained wet too long during flowering, which led to rot under their petals," explains Sjraar.

A challenging situation for Dutch growers
"Lit cultivation has begun, but acreage in the Netherlands will be the same as last year. Gas prices will eventually normalize somewhat, but growers aren't sure if those will return to past levels. Several of them have been forced to dump planting material, plant earlier, or not use lighting. The whole situation's generally quite challenging for Dutch growers."

"They must make all kinds of individual decisions that go beyond growing quality strawberries. There's another development in Germany: labor costs are rising sharply. That's going to have a considerable effect because strawberries are mostly still harvested manually, despite the development of picking robots," Sjraar says.

Christmas markets
"Day trade prices, however, weren't good in October. Growers in our export countries, like the United Kingdom, could harvest tunnel strawberries until late October. That's never been that long. Prices only began to truly recover from the end of October." Hulsman thinks demand will pick up. "Prices are already excellent. The festive season's always good for soft fruit sales. The German Christmas markets started last week, and, at that time of year, supermarkets and bakeries always want strawberries."

The import season has begun at Frankort&Koning too. "We started with Greek strawberries last week. That country has invested plenty in new and better varieties in recent years, a similar trend to Egypt and Morocco. We've also received the first Egyptian strawberries. Varieties such as Sensation, Calinda, and Inspire are increasingly gaining a foothold alongside Fortuna," says Sjraar.

"Plus, several promising new varieties must prove themselves commercially before they're planted on a larger scale. These firm varieties store well and have improved flavor, so expectations are high. These import volumes will keep increasing in the coming weeks, though the Spanish strawberry supply remains limited." 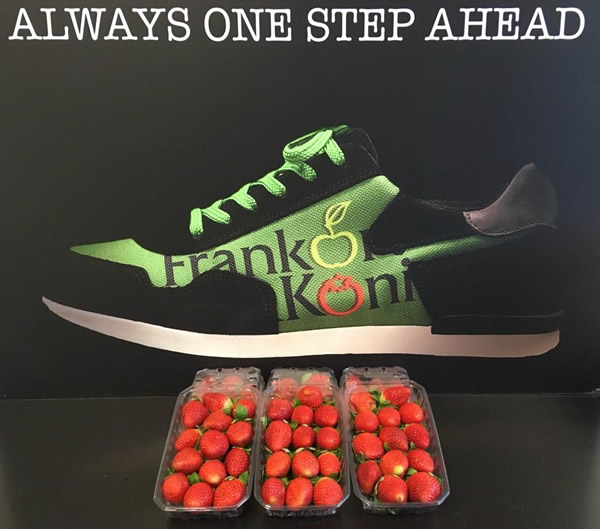 "Our company sells to retailers and gastronomic and regular wholesalers throughout Europe. Customers want a total package, continuous availability, product specialization, and logistical solutions," Sjaar continues. "We've been responding to this demand for years and are increasingly building up our presence in the soft fruit world. When we see opportunities, our team discusses them with our cultivation partners, and we plan accordingly."

"Blueberry imports are currently in full swing too. Peru has started up with decent volumes - not surprising, given the massive plantings of the past few years. That led to well-below-average prices in the last four or five weeks. At present, we're also receiving raspberries from Portugal and Morocco. That market's usually quite fickle, and there are vast quality differences at the moment. Also, there have been market surpluses. These fruits still find their way in, in all kinds of ways," Sjraar concludes.