As companies that work in the food and agriculture industry, all of us immediately take on the responsibility of ensuring that we're leaving the food system in a better state than it was before we entered it. In order to do that, one of the things we need to do is make sure that we're informed about the abundant options of agriculture inputs that are out there. Once we have a holistic idea of what exists, only then can the controlled environment agriculture (CEA) operators choose the best option that aligns with their respective principles.

This week, we dive into an agriculture resource that is increasingly playing a greater role in agriculture as a growing media: peat.

What is peat
Peat is made out of the dead, partially decayed organic plant matter that accumulates in peatlands over many years, millennia, in fact. The wet, acidic, low oxygen conditions of peatlands slow down decomposition, trapping this organic matter. These peatlands grow by approximately 1m over 1,000 years. As you can therefore imagine, re-growing peat takes a significant amount of time.

It's also important to know the difference between peat and peat moss. Peat is created from organic matter that is submerged in the bogs. Peat can be formed from different materials, but a large percentage of the peat harvested is composed of sphagnum moss, hence the name peat moss. Meanwhile, sphagnum moss is a plant grown on the surface layer above the peatland, soil, or swamp. It thrives in cold and wet weather. As time goes by, the old parts sink into the lower layer. The process of decomposition takes place very slowly in the oxygen-less layer. Over a long period of time, a thick layer of dead material named peat moss is formed.

This video by The Live Streamed Classroom provides a clear understanding of how peat is extracted.

Where does peat come from
Almost all of the peat moss sold in the US comes from the vast sphagnum moss area in Canada. Even though Russia has the largest amounts of peatland around the world, Canada comes second in terms of the largest amount of global peat moss supply, with 25% of the world's moss.

Nevertheless, at the moment, global communities are still trying to collect a clear map of where all of the peatlands sit. The most recent and up-to-date map is The Global Peatland Map 2.0, launched by the Global Peatlands Initiative partners at the Peatland Pavilion during UNFCCC COP26. While it seeks to improve the base knowledge on the location and extent of peatlands worldwide, decision makers still lack total insight on the extent of where peatlands are in order to prevent further drainage and degradation, which oftentimes comes from agriculture industries.

Strengths of peat
Peat has a very good water-holding capacity. According to Science Daily, peat moss can hold up to 25 times their dry weight in water, more than natural sponges. On the flip side, even though it retains water very well, excess water also quickly moves through the material to drain out, which means very little water is stored in the media, which could cause a range of issues. Depending on the peat source, most peat mosses have a pH in the range of 3.5 to 6 on average. For certain plants, having a growing media with a slightly acidic pH is a big advantage. Furthermore, it's fairly lightweight. Once harvested and dried, peat moss weighs approximately 25 lb per cubic foot, compared to the topsoil, which usually weighs about 40 lb per cubic foot. 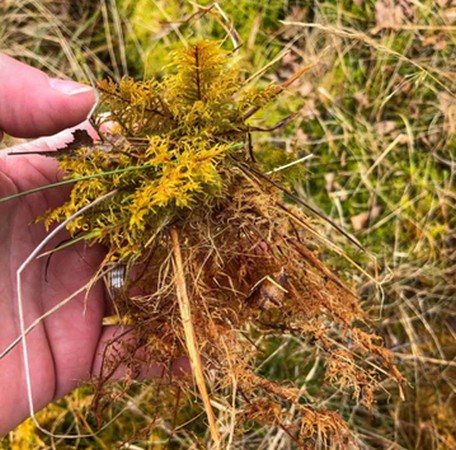 In terms of air circulation through the media, after peat is dried down to create peat moss, it then doesn't compact very easily. Therefore, crops grown with peat get access to a lot of open pore space within the material. From a nutrient perspective, it does have a high cation exchange capacity. In other words, it has many negatively charged sites that can hold onto positively charged molecules such as nutrients and water. Lastly, peat moss is often used for seedling starting, in potting mixes, and even as a primary hydroponic or aquaponic media.

Challenges
Peat is not always appropriate for all hydroponic systems. Once it starts to decompose, it compresses around the roots, choking it in the anaerobic root zone. While some indoor farms will seek to balance this effect by adding more structure to the medium or to mix peat moss with something else, such as perlite or coco coir, it does mean that peat as a standalone can't be as widely and easily used as some other grow media. Compared to other grow media, pure peat moss can be more expensive. It has low nutrient content due to the way that it's formed, namely the high water table and lack of nutrients that make its surrounding environment. Also, as mentioned earlier, its slightly higher pH level makes it more acidic, which could be a problem for some indoor farms' crops.

From an environmental perspective, the US Geologic Survey reports that "the volume of global peatlands has been decreasing at a rate of 0.05% annually." There are many other reasons to conserve peat moss as well, the first and foremost being the massive habitat reduction that results from peat moss harvesting. Peatlands store twice as much carbon as all the world's forests. They're also a type of wetland that occurs in almost every country on the globe, storing vast amounts of carbon. Unfortunately, when peatlands are farmed, it does the opposite, changing from being a carbon sink to a carbon emitter. About 15% of the world's peatlands, which covers less than 0.4% of the global land surface, have already been drained. Despite the minimal size, to show just how impactful peatlands are as carbon sinks, this 15% removal has released huge amounts of greenhouse gases, such as carbon dioxide, from the carbon stored within peat soils into the atmosphere. GHG emissions from drained and burned peatlands equate to 10% of all annual fossil fuel emissions.