The cultivation advisory team of Horti Consult International has established a tradition of making an international (greenhouse horticulture) trip once each year. This year, the team traveled to Japan.

Japan hosts about 500 hectares of modern greenhouse horticulture businesses. This surface is used by a total of ten to fifteen growers. Around 80 percent of the total production of Japan is facilitated by these growers.

Fertilizers are acquired from China. The price thereof has doubled this year as well. It's difficult to get people to work in the greenhouses, which eventually often involves people from Indonesia and the Philippines. In their report, the cultivation advisors mention a percentage of 30%.

A problem Japan is facing is an actively aging population, making it difficult to train the next generation. An advantage is that there's plenty of water. Mineral wool is used for growing, which later on is spread across the farmland.

The heat supply is provided by burning heavy oil. When converted to euros, this amounts to 0,70 euro cent per liter. Breeding of plants also takes place in-house. The temperatures in summer are very high with radiation of 2500 Joule. During winter, in December specifically, the radiation boils down to an average of 900 Joules a day.

Japanese summers are very hot. Temperatures during the day can easily rise to 36 degrees Celsius. The nights can also be hot and moist. Therefore, bell peppers are sown from the end of July. Cultivation takes place during winter and is concluded in June or the beginning of July.

The greenhouse that the team visited was built by the Bom Group. It was still as good as new, since its first plants were only sown last summer. The aim is to realize a production of 20 kg/m2 this first year.

In the greenhouse, the cultivation advisors witnessed multiple cultivation techniques, including those of Priva, Ridder, and also new glass. Older locations of the grower concern polytunnels where heat pumps are used with air hoses. Sanitization through drain water at the visited location takes place by means of a UV-sanitizer of Priva.

The growers currently use breeds from Enza for the reds and yellows. With the red bell peppers, they aim for fruits of 160-180 grams. Also breeds from Rijk Zwaan are used.

Group photo from the visit at bell pepper grower Tedy

Strawberry cultivation
Strawberry grower Wataru Ichimura strawberry was also visited by the Horti Consult International team. Here they encountered a glass greenhouse as well, while growers at other locations still cultivate under four hectares of foil.

During the Christmas period, this grower allows its consumers to pick fruits for one hour for a fixed price. The growers use ten different types of seed and propagation materials.

Seeding occurs at the end of September. The cultivation process from seed to propagation takes three months when sown at the end of June. The growers do not use applications for leaf or vine support.

The advisors noticed a drop-EC of 1.5 at the growers. The output source for water has, according to the group of men, "too high of an EC of 1.2". "Much too high" even.

The greenhouses are covered by gauze in order to keep birds out. The greenhouse is supplied with plastic and F-Clean foil.

In the strawberry greenhouse

Another two businesses that were visited were Del Monte and Rijk Zwaan, which operate in Japan as well. The originally Dutch breeding company has 200 hectares of high-tech glass in Japan.

The visited Rijk Zwaan location spans six hectares. Next year it is set to expand with more high-tech greenhouses.

Rijk Zwaan is active in 25 crops with 1500 varieties. The breeding business has thirty locations globally, and twenty seeding locations in total. The company has a global share of 9%. Founded in 1924, it currently holds 3800 employees, of which eight in Japan. They collaborate with Takada Seeds from Osaka, Japan.

Typhoons and earthquakes, unfortunately, hold back development. The tomato is a true number one, while the cucumber is a strong runner-up. Bell peppers are frequently imported from South Korea, especially since the Japanese cost price is relatively high at 1,5 euros a piece.

The regions Marmotto and Kyushi hold the most greenhouses. Especially in winter, for during summer cultivation mainly takes place in the region of Tokyo.

Cultivation of lettuce
Chain regulation is the focus. Salanova lettuce is getting more and more introduced in Japan.

Knox lettuce has an improved shelf life through breeding, as the team of advisors noticed during their visit to Rijk Zwaan. In summer they use white foil for outside cultivation, which is exchanged for black foil in wintertime. During their trip to the demonstration field, the men noticed a trail of dense farming. Regarding fruit vegetables, the team reported that the yellow leaf virus at tomatoes is a hot item in breeding. Whitefly is a prominent culprit in this case. 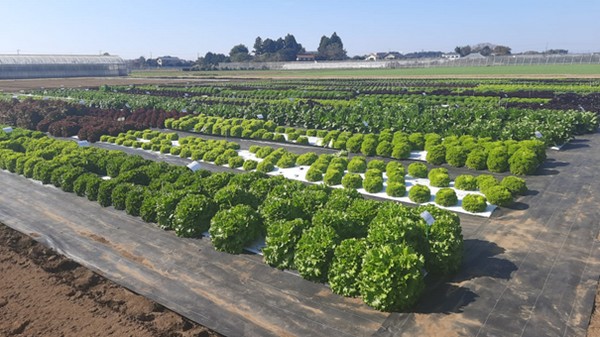 The group went on an "unforgettable" bike ride through Tokyo, set foot on the highest mountain in Japan (Mount Fuji), the royal palace, the Tokyo train station, visited both the temple and the grave of the late Japanese emperor and walked through the Tokyo Fresh Market. They took plenty of photos of the country the men describe as "very neat and green". The average rainfall is about 1500 millimeters a year.

The report states that the Japanese "are still very careful with corona" and that "facial masks are still visible nearly 100% of the time", and "also out in the streets". In Japan, lots of plastic is used, certainly in vegetable packaging, but none of that plastic is found back in the streets. Many vegetables are packaged in smaller quantities. The general population of Japan is also very disciplined. On escalators they stand on the left and waiting in line is no problem either. Instructions are carefully followed.

According to the men of Horti Consult International, Japan is "a modern country, but less progressive than in the past". An advantage of this, however, is that the country is less expensive than it was before.

View many more photos of the trip of the Horti Consult team here.