'German iceberg lettuce and endive season is coming to an end'

In the case of iceberg lettuces, Spanish goods obviously predominant. Local products only had so much significance in Munich, and they had disappeared from the assortment everywhere else. At the beginning, Dutch products were still available in Cologne, and by the end of the week, the first Italian products appeared in Berlin. However, neither source played a major role overall, according to the latest BLE market report.

In general, business was slow. Price corrections were the exception, as demand was covered sufficiently. Only in Cologne did traders take advantage of the temporary monopoly position of Spanish lots with slight price increases. In Frankfurt, meanwhile, prices fell somewhat as sales were not as good as expected. 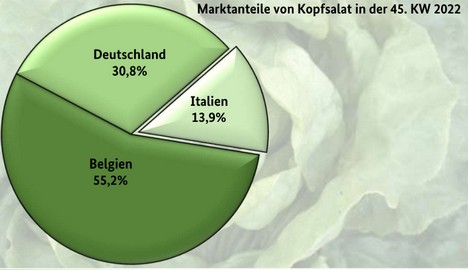 Lettuce: First arrivals from Italy
Regarding lettuce, Belgian goods outweighed domestic ones. Additionally, the first Italian deliveries arrived in Munich, opening the season. These found customers relatively quickly because they were cheaper than those of the competition. If the quality of the goods was convincing, previous prices remained overall. Belgian products were cheaper in Frankfurt, which is why they generated more attention. There were red German lettuces there as well, which could be sold briskly at € 7 to 8 per box of 9.

Colored lettuces: limiting of the domestic supply
In the case of colored lettuces, the domestic season turned into the home stretch, with the inflow decreasing. Instead, French imports expanded their reach. Italian and Belgian imports rarely had more than a complementary status. Marketing was straightforward, and prices did not change significantly. In Berlin, Italian shipments were very abundant, which severely disrupted the turnover of domestic goods.

Endives: German season drawing to a close
Regarding endives, the German campaign was nearing its end. However, demand was met by Belgian and expanding Italian products. As a result, traders rarely had cause to adjust their prices. On several occasions, Italian lots were put up in both the 9 and 6 grades. Only Hamburg reported increases in the price of Italian items. Lamb's lettuce was not particularly popular in Frankfurt, and so it became cheaper.