The Russian invasion is greatly impacting Ukraine's blueberry traders. The war has now been going on for about nine months. At the latest Global Berry Congress in Rotterdam, Oleksandr Pukshyn of Blue Berry, a Ukrainian company, shared its consequences with the soft fruit world. "It's vital that we remain represented, so people don't become blasé about what's happening in Ukraine. It has a huge impact," he begins.

Blue Berry grows its berries on about 200 hectares under the Carpathian sun. "We began in 2013, and our part of the world has an ideal climate and soil for growing blueberries. Of course, we also experienced some problems during the pandemic, but we managed to survive that. This war is a different story." 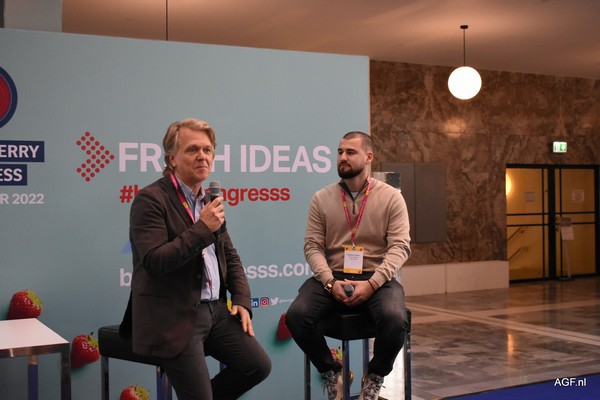 "I remember it well: those first rumblings of a Russian invasion. I said, 'Surely, in this modern society, such a war breaking out is impossible. So at first, we weren't too concerned about it. Until it turned out to be a grave matter with all its heartbreaking consequences. Then things quickly became challenging," recalls Oleksandr.

"If the soldiers are giving their all, so can we"
Blue Berry harvests its berries from mid-June to late September. "In the first months, logistics was the primary hindrance. It was extremely difficult to get gasoline and fertilizer. That prevented us from doing our work properly. Eventually, of course, many people decided to flee the war. We had a large team of about 500 seasonal workers."

"But by the time the picking started, we had a severe staff shortage." Neither was this Ukrainian company faring any better, sales-wise. "The displacement of people resulted in a unique sales market. Some places became hectic, while there was nobody in others. Or at least no one could visit the store," Oleksandr explains.

During these extremely challenging times, the soldiers inspired these traders. "We're a proud people, and if they can give their all for our country, so can we."

The company thus turned to importing vegetables from countries like the Netherlands and Poland. "We do so in partnership with different retailers. That's partly for survival, but we feel a responsibility to feed our people. We're compelled to focus on that, putting blueberries on the back burner for a while," continues Pukshyn.

Blueberry-52
"But, at the end of the day, we remain blueberry growers, so we'll return to that eventually." The company is quite optimistic about the future, despite lingering uncertainties about how long the war will last. "Just before it began, we'd started a program: Blueberry 52. In collaboration with the Dutch company ADD Growers, we wanted to supply blueberries 52 weeks a year. That's something we'd like to pick up again."

"Ukrainian consumers must be able to enjoy our blueberries year-round. Also, we'll keep trying to attract foreign markets. People shouldn't buy our fruit just because it happens to come from Ukraine. We want our flavor and quality to stand out. We're in a difficult period because we start after Serbia and Spain. However, we're sure we deserve our place in the market. Not based on our country, but on our fruit," Oleksandr concludes.