Learning how to be a grower:

"You have to be knowledgeable about the crop, but also know how to work with others"

HAS green academy has made the headlines quite a few times, with its many research partnerships with different horti suppliers. For instance, we reported some time ago about a joint research effort with Fluence to explore dynamic lighting. At the same time, the University of Applied Sciences also allows its students to get their hands dirty without the constant supervision of a more expert person. “We have projects where we promote next-generation growing in greenhouses,” says Janneke Grit from HAS green academy. “As part of that, a component of our curriculum for our Horticulture & Business Management students is to work directly in the greenhouse on a practical project.” 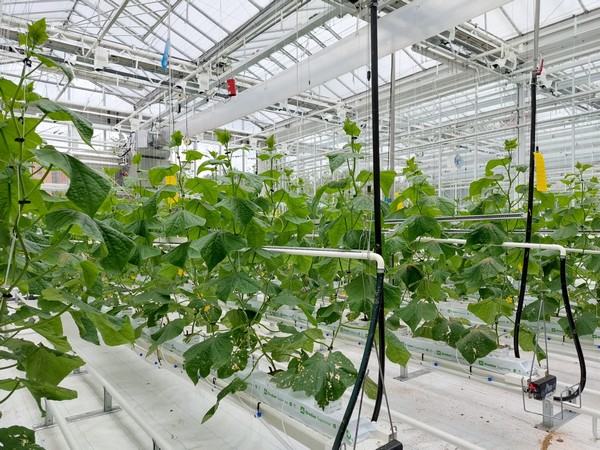 The challenges of working in a greenhouse
Currently, strawberries and cucumbers are quite trending crops. So it’s no wonder that the students decided to work on that. “We started at the end of August,” says Nicole Kuleshova, one of the students partaking in the project. “The main goal has always been to keep the crop healthy. It may sound easy, but it was a big change for us. We have always had support from teachers and other greenhouse people. We have never been alone in that kind of work. This year, it was different because we had to make cultivation decisions ourselves, which is even more challenging when you are doing that in a big, international group.” 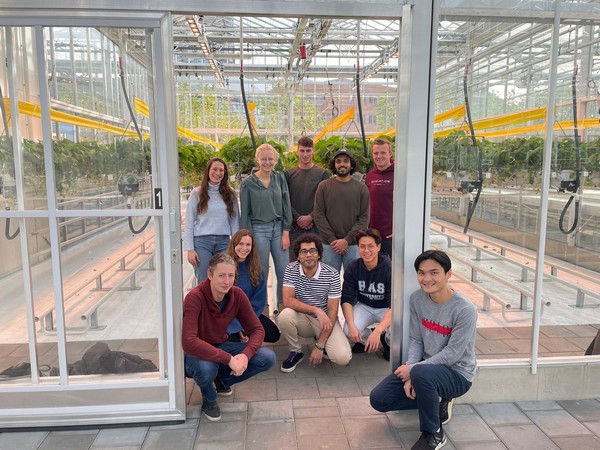 “It was a challenge to get our plan going,” says Sonia Carmen Morar, another student from the project. “You don’t only have to be knowledgeable about the crop, but you also have to know how to work with others. We started having meetings, making an agenda, so that everyone knew what was going on.”

Cucumbers
For the cucumber cultivation, the students decided to go for a wire crop. “Few growers are doing that,” Nicole points out. “On top of that, the time of the year we started the project is unusual for both cucumber and strawberry cultivation. So, we had to take that into account too.” 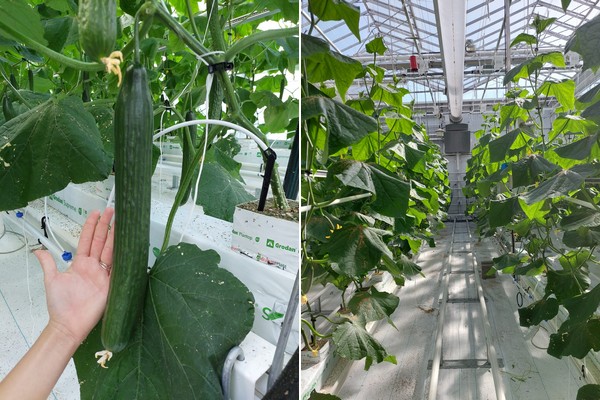 Maintaining a balanced climate has indeed been particularly tricky for the group of students. “We reached a healthy climate balance just a couple of weeks ago,” she says. “We had very unusual weather, in September through October. We had very warm and sunny days, and then these got suddenly much shorter. That was a problem for pests and pathogens, we struggled quite a bit with pests and diseases, especially botrytis. But at this point, all is good.” The problem with such pathogens, however, wasn’t caused by the unusual weather only. “Our air treatment stopped working at one point,” Sonia points out. “When it failed, we saw that the relative humidity went too high, and that’s when we go the diseases. Some problems were also caused because some plants were not cut properly, which made it easier for fungi to show up. So, we also focused a lot on the correct handling, and now things are going alright.”

Strawberries
For the strawberry part of the project, the goal is again to keep a healthy crop. “Though it’s more challenging than cucumbers,” Nicole says. “With strawberries, it’s more difficult to see if something is going well or wrong. You look at the crop, and it seems as if little to nothing has changed. So, we had to figure out how to read the plant – that was definitely the biggest challenge.” On top of that, pests didn’t leave them alone there too. “We had caterpillars, at one point. Additionally, we have nets on the windows to help with other pests. But that complicates ventilation, and you can do less with that when there are nets.” 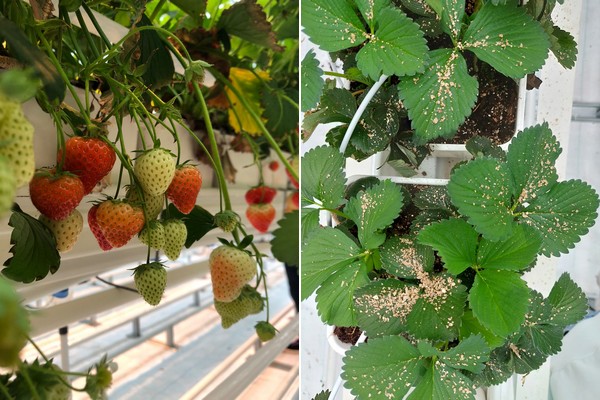 While strawberries might be harder to read, controlling the temperature and, say, the relative humidity was much easier than in cucumbers. “Cucumber plants have many more leaves and are generally bigger than strawberries. So, the former requires more water, and it’s easier to get different microclimates there.” 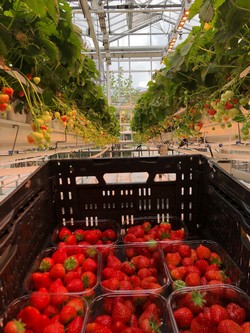 The students commenced harvesting last week, and are quite satisfied with the quality of the fruits. “Yet, the strawberries were smaller than anticipated,” Sonia explains. “So, we cut all the flowers so that the plant could focus its energy on its fruit.” The strawberry project will continue until Christmas, while the cucumber one is about to end soon. “We don’t use any light there, so we have to stop soon,” Nicole points out. “If we decided to light it, then we could continue. Considering the current situation with high energy prices, a lot of growers are not using any artificial light for cucumbers. After all, we wanted to keep this project real, and reflect on challenges growers face daily.”

The project is part of the program: HNT: gas erop! and made possible by Regieorgaan SIA.

For more information:
HAS green academy, University of Applied Sciences for agriculture, food and the living environment.
has.nl/en