Rwandans eat more than 100 kg of potatoes per capita per year, and the hilly nation has good environments for growing the crop, yet the average yield is less than half what it could be under optimal conditions, in large part because most farmers plant low-quality seed potatoes.

The aeroponics technology for potato mini tuber production – a rapid multiplication method in which potato plants’ root systems grow suspended in chambers filled with a nutrient-rich mist – was thus introduced in Rwanda 13 years ago as a solution for the national shortage of quality seed potatoes.

The conventional way of producing quality potato seed is to grow disease-free in vitro plantlets in pots in a greenhouse. However, this technique requires a substrate that is sterilized using chemicals or steam, which comes at a financial and environmental cost, and yields only 5 to 10 mini tubers per plant, whereas plants in an aeroponic system can produce more than 100 mini tubers. The aeroponics technology offered an opportunity to increase production, reduce the time it takes to grow mini tubers, and lower the cost of production. Additionally, technology limits the spread of diseases. 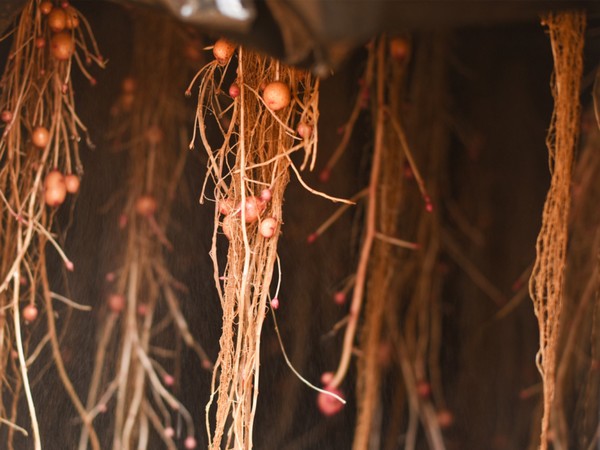 The introduction of aeroponics in Rwanda was a result of the International Potato Center’s (CIP) Three-Generation (3G) project, supported by USAID East Africa from 2009 to 2011. The first-ever pilot model was established at the Rwanda Agriculture and Animal Resources Development Board (RAB) Musanze Station in 2009.

During the implementation of the project, CIP trained RAB staff and interns on how to construct and manage an aeroponics greenhouse and developed a manual on quality seed potato production using aeroponics that was shared with RAB and other partners.

Evariste Nsabimana, one of the interns trained at that time, is currently the production manager at the farmer-led Seed Potato Fund (SPF) Ikigega and an expert in aeroponic mini tuber production. 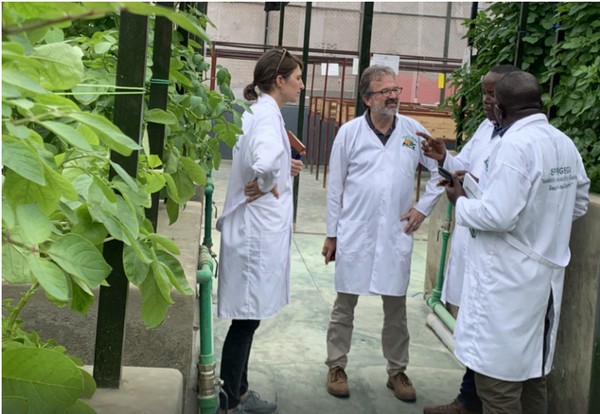 The multiplication rate of RAB’s aeroponics facility was ten times higher than the conventional method, indicating that it was indeed a solution to Rwanda’s scarcity of quality seed potatoes, a realization that increased the Government’s interest in the technology.

Government adoption
After the 3G project ended in 2011, RAB continued to maintain the technology and promoted it in the country. During a visit to RAB’s Musanze station, Dr. Agnes Kalibata, who was then the Minister of Agriculture, visited the aeroponic pilot model and learned about the technology’s potential for seed potato production. She was impressed enough to order the construction of two aeroponics greenhouses, each with three times the capacity of the pilot model, at the Musanze station, with funding from Belgium Technical Cooperation (currently ENABEL). This launched mass production of quality potato mini tubers in the country, as the two greenhouses had the capacity to produce 900,000 mini tubers from 18,000 plantlets. 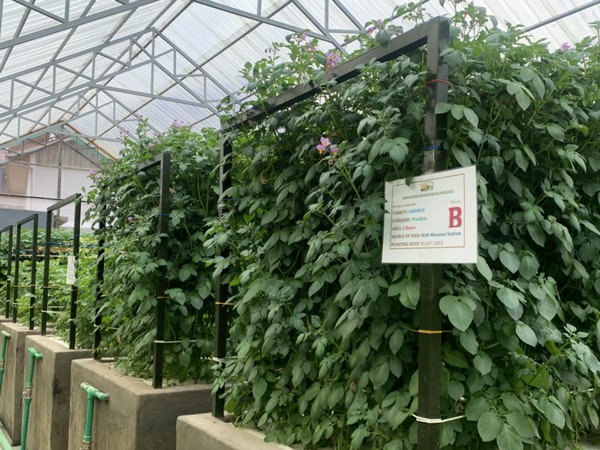 Private sector
The aeroponics facilities at RAB Musanze attracted the attention of many farmers, especially seed multipliers, and RAB offered technical assistance for those that wanted to learn and adopt the technology.

Urugaga Imbaraga, a farming organization that operates in Musanze District, is one of those that visited the RAB station to learn about the new technology. The organization’s former president, Mr. Apollinaire Karegeya, became the first private seed multiplier in Rwanda to adopt aeroponics. He opened a facility in 2015 with about 2,500 plantlets and started harvesting mini tubers after 2.5 months. It became a model farm in the region, and many farmers and development organizations visited him to learn about aeroponics. Private seed multipliers across the country have since adopted the technology. One of them, Mr. Bayingana Innocent in Rubavu district, received support from USAID under the Private Sector Driven Agricultural Growth (PSDAG) project to construct an aeroponics greenhouse in 2017. Other facilities were subsequently constructed by the Abatubura Mbuto farmers’ group in the Nyamagabe district and Agri-Seed Africa in Musanze. However, all these are small operations that face challenges like high electricity bills and lack of quality, affordable materials for construction, which means research is still needed to optimize the technology and resolve such issues. Nevertheless, 13 years after the introduction of aeroponics in Rwanda, what started as a small intervention has led to the establishment of a mega aeroponics screenhouse owned by the Seed Potato Fund (SPF) Ikigega.

The SPF-Ikigega mega aeroponics screenhouse has the capacity to produce 540,000 mini tubers per season, or more than 1 million mini tubers annually. It is also fully powered by solar energy, which significantly reduces operational costs and increases profitability.

“After we realized some challenges like high electricity bills, we decided to introduce innovations to the new mega aeroponics greenhouse like solar energy and durable construction materials,” Nsabimana explained.

“It is heartwarming to see the small seed that was sown in Rwanda blossom into large-scale impact. I applaud RAB for ensuring the technology could scale out from public to private sector, and I thank USAID East Africa for their funding because, with it, a valuable seed was sown.”

The way forward
According to Jean Claude Nshimiyimana, a senior agronomist and project officer during the 3G project, there are still challenges to achieving the aeroponic technology’s full potential in Rwanda. For example, optimal construction materials are still unavailable locally, so seed multipliers who adopt the technology are forced to use local materials which haven’t been tested in terms of effectiveness and cost-benefit analysis. There is also a need for studies of how different potato varieties respond to aeroponics, how processes can be tailored to their needs to maximize production., and whether the standard nutrient solution available for aeroponics should be adjusted for different varieties. Furthermore, there is a need for training to increase local capacity to operate aeroponics systems as the technology is scaled out across the country, as well as to support construction and maintenance.

While such challenges are addressed, Rwanda’s expanded aeroponics capacity is already increasing the supply of disease-free mini tubers, which specially trained seed multipliers to grow to produce the high-quality seed potatoes that enable farmers to produce optimal yields. In the long term, this will boost farmer incomes and improve the food and nutrition security of a growing number of Rwandans.