Last Wednesday morning hundred cucumber connoisseurs were invited by BASF Vegetable Seeds to the Philips Stadium of Dutch soccer team PSV. The invitees were provided with lunch, dinner, a line-up of speakers and a tour through the soccer stadium. The kick-off took place at 13:30, followed by a drinks interval and a third half, of course. This included a final word by Martin Scherpenhuizen, from the AGF wholesaler by the same name. 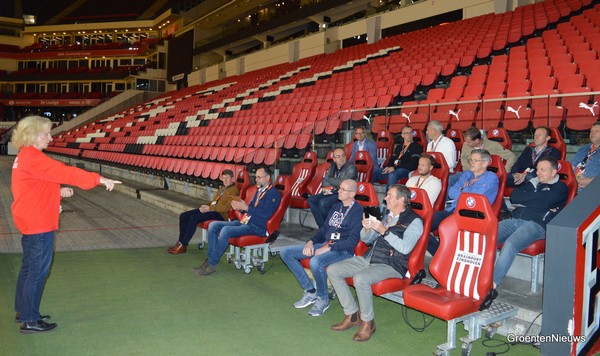 In the dug-out. The closest one could get to experiencing a match, because entering the grass is not allowed.

CHP has future potential
John Kruijt of Enova kicked off the event. He was the first speaker announced by David Peters, who led the afternoon on behalf of BASF. David introduced the theme 'Taking up challenges together', which John could build upon. His specialism lies with energy, which poses quite a few challenges. John mainly discussed the distant future rather than addressing short term affairs. Yet, he briefly pointed out that the current high prices are likely temporary. "It will work out," he said, pointing to the drop in gas prices. "Before 2026 and 2027 these will be below 40 euro cent again." He advised growers to look into working with a 'clean spread'. Even with the higher prices, it might be possible to generate electricity from natural gas and sell this energy, provided that the grower has a CHP.

In the long term, John is lacking coordination from the government on the way to goals, set by this same government. He pointed out the danger of an abundance of sustainably generated energy that engulfs the net, as well as the possibilities for growers to capitalize on this trouble. To do so, growers with cogeneration possess a machine with a promising future, according to John. Also Europe recognizes that cogeneration units remain relevant, especially when both coal-fired and gas-fired power plants will be scaled back. "We shouldn't be afraid that we will be put on the sidelines," says the energy specialist. In his view growers should focus on flexibilisation. For example, they might find quickly switchable LED lights to be a useful means. Flexibilisation does, however, require further research. Especially regarding lighting (what is the effect of switchable LED, for instance, on the crop?) and CO2 (how to produce and store it?). For flexibilisation with regard to heat a thermal buffer is crucial, according to John. 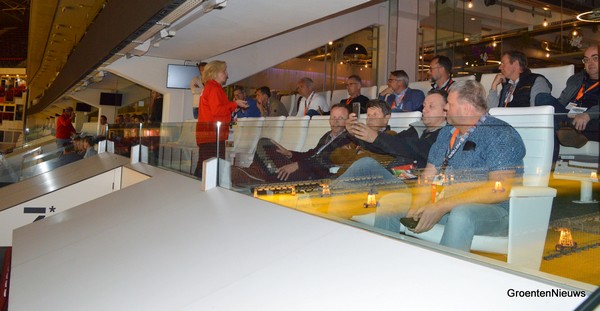 MRL
After energy it was time for Maximum Residue Limits (MRL). Monika Richter of the chemical branche of BASF took the guests into the world of crop protection. In particular to the residue that comes with its use in the cultivation of cucumbers. She showed how BASF determines redisue limits and reaches them. By pointing out that exceeding an MRL isn't directly dangerous, she wanted to reassure the audience. She also gave the growers a tip: to use a digital database with limits instead of a static list. Limits are susceptible to change (for example, when a country leaves the EU, like the United Kingdom). In that case, an up-to-date list can prevent a grower from being unable to sell his product.

Regardless of the energy crisis, the lamps stayed on, for the grass needs to keep growing

Resistance
The third speaker in the first half was one of their own. Cucumber breeder Robert Swinkels showed what he and his team are working on, specifically for the high-tech market. The current focus point is cold tolerance. In cold cultivation more quickly problems arise with botrytis and downy mildew. The breeders aim to fortify the species against this, without making them fully immune. "That is yet something else that resistance," remarked Robert. The challenge lies with combining resistances with good productions, quality and as little need for labor as possible. 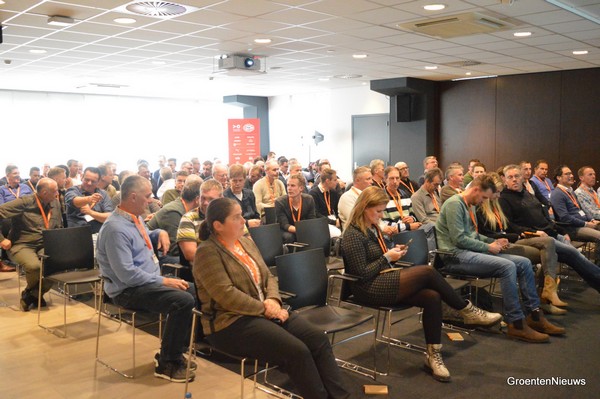 The usual press room was filled with a hundred cucumber connoisseurs.

Robotics
After a drinks interval, the second half was kicked off by Richard Vialle of Crux Agribotics. He showed videos of two robots: the SortiPack robot, which can be used for outsourcing the sorting and packaging of cucumbers, and the harvesting robot the company is working on. The company started on the latter even before the SortiPack, in 2014. However, it may take up to three more years before this product will truly go into serial production. Richard mentioned that it's not an easy task to find the right, qualified people to accelerate the development of robotics, which brought about the following question from the audience: What about the growers themselves, when they start working with a robot? "Will we then be able to find the right people that want to work in our warm greenhouses?" This led Richard to point out that Crux is working hard on an idiot-proof robot, next to expanding its services. "This is the reason that we also consider not selling the harvesting robots, but rather renting them for a few cents per harvested cucumber." 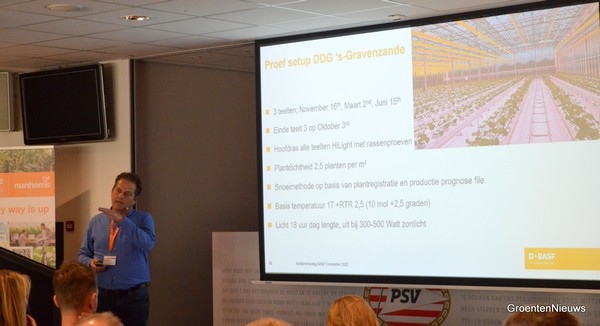 Data-driven cultivation
Marcel Huibers of BASF and Plant Empowerment consultant Mark van der Werf discussed, as previously announced, the results of data-driven cucumber cultivation in the demo greenhouse in 's-Gravenzande, The Netherlands. Marcel discussed what the growers have done in the greenhouse for the past season and what they will be doing differently in the upcoming season. Important changes include planting at a later date (December 9th), working with a lower period of 24 hours and using 0% of the suspended lighting capacity of 340 micromol. The agronomist explained that by reducing it to 200 micromol LED the new cultivation can be compared adequately with using high-pressure sodium (HPS) lighting, which is frequently used in practice.

Subsequently in his presentation, Mark drew attention to the importance of planning and to the many graphs he showed on screen. The graphic displays of light and temperature supported his plea for focusing on lighting. He pointed out the importance of matching an illumination level to a 24-hour temperature. David asked a question regarding what a grower should do, if one is interested in commencing data-driven cultivation. Mark responded with a tip: "Try generating an RTR (Radiation–Temperature Ratio) graph once a month if you have a bit more time this winter." The grower could learn from that graph and perhaps use it to create a plan for the upcoming cultivations.

Clear vision on cucumber market
The presentation of Martin Scherpenhuizen closed off with the market. Martin shared his view on the cucumber market. He is critical of the performance of this year's Dutch cucumber growers. The trading house received more complaints than previous years regarding the quality of fruit vegetables. Martin calls for greater care to ensure the cucumber quality on behalf of "PLC The Netherlands". After what, according to Martin, has financially been a very good cucumber year, this should be possible. Read Martin's extensive argument here.

Team photo with the BASF team

A tour through the PSV stadium and a dinner - or the third half, if you will - concluded the day. View the photo report here.