On a gentle slope, a short drive from the village of Clevedon, sits one of two strawberry farms run by Kevin and Diana Gallagher. Helena O'neill, with hortnz, speaks with Diana about her passion for the strawberry patch.

As spring begins to take hold in the Auckland region, a backroad on the outskirts of Clevedon village sees an increasing flurry of traffic – especially on weekends, with the second week of October marking the beginning of the harvest season for Clevedon Strawberries. What began as a relatively unknown berry operation is now a firm favorite among locals. The business also holds a regular stall at the popular Clevedon Farmers' Market.

Clevedon Strawberries operates two sites – the original site at Clevedon and a second just a short drive away at Ardmore. The Gallaghers were initially in partnership with their next-door neighbors until 2019, when the neighbors opted for retirement, Diana says.

In 2014 they planted 600 strawberry plants as a trial, digging and raking the mounds and hand-laying the polyethylene. 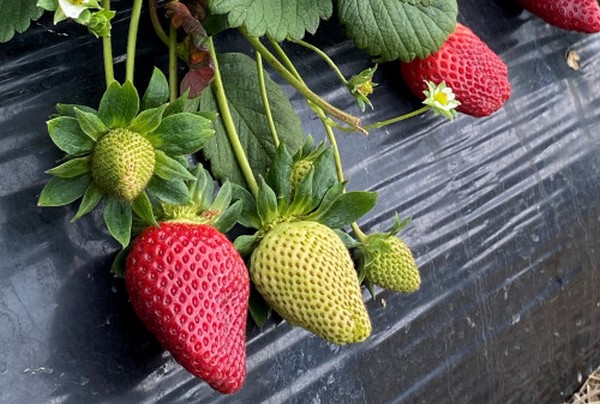 "We thought, 'wow, this is pretty cool,' and so the next year, we went all out and planted 80,000 plants, not really knowing what we were doing," Diana says. "We didn't have the infrastructure in place. The shop was in the process of being built, and it really was trial and error. We took stock after that first year and decided that it was too big, reducing planting to somewhere between 40,000 and 50,000 in the second year. That was more manageable as far as harvesting and selling the fruit."

In 2019, Diana and her husband, Kevin, began leasing additional land at Ardmore, the site of the former Strawberry Corner business. "We approached them about buying the big strawberry sculpture as the land had been sold, and it was no longer going to be a strawberry farm. The new owner said his daughter really loved the big strawberry and wanted to keep it. Before we knew it, we were talking with them around planting there as well."

Initially, the couple planted a small number of strawberry plants to test the logistics of operating two different sites. Diana says they have increased planting over the following two seasons and now have a total of 110,000 strawberry plants across both sites. The patches on each site cover one hectare each, with 95,000 plants of the Camarosa strawberry variety and the remaining 15,000 in Albion.

"There's a lot of driving in between the two sites," Diana says. "Ardmore has a bigger packing area so that picking can be done at our Clevedon site with fruit transported over there for packing. It has come down to getting people in to manage the shops because Kevin does work a full-time job and then works here for the weekend."

Other strawberry growers
Diana says she doesn't know many strawberry growers, but Francie Perry of the former Perrys Berrys was "a bit of a mentor" for the couple. Francie spent 40 years in horticulture and ran one of the country's biggest strawberry operations until frustrations with Covid-19 restrictions led her to close the business.

"We used to buy all our plants through her until she shut down last year," Diana says. "Even now, we still ring her to pick her brains. She has such a wealth of knowledge, and she's been really good to us. But on the whole, it's more us working it out as we go along. We don't know if what we're doing is the textbook way, but it's what works for us."

Even after eight years of running the business, the couple is always learning about growing strawberries. Towards the end of November, Clevedon Strawberries opens the two patches to the public for pick-your-own berries. "With strawberries, because it's such a short season, everyone loves them, goes crazy for them. I still am, even to this day, in awe of picking a beautiful strawberry."

Sourcing enough staff remains the biggest challenge for the business. "Being seasonal, you lose them all, and then you re-advertise next season," Diana says. "I tend to have brand new staff each season apart from a couple of people coming back.

"How our season falls with it beginning in October, we have been reliant on a lot of university students, but they're not available until the beginning of November. So we have about a month where we struggle to keep all roles covered. It doesn't help that each year we have got a little bit bigger."

New season
The couple also have a long-standing handyman, Pete, who helps keep the farm running smoothly. The season usually wraps up by late January, with the next few months spent preparing the soil for replanting. Come planting time in May, pukeko prove to be a big pest, pulling out the young plants.

"We can go back the next day and replant a whole row because they've pulled them all out," Diana says. "The plants are quite hardy, so you can replant them." Humidity throws another challenge, causing brown rot that requires fumigation. Twice, the operation has battled spider mites.

"We didn't really know what we were looking for when that happened," Diana says. "One area of our patch looked like someone had poured hot water on it… it was the first time it had happened. Someone said to us that we had spider mites in there."

Fumigating for spider mites means three stand-down days before fruit can be picked. "If we think there is any hint of spider mites, we are in there with a magnifying glass looking for them," Diana says.

Ice creams
Fruit is sold through the two on-site shops at the Clevedon Farmers' Market, Clevedon Superette, and as of this season, a second caravan based at Botany Town Centre. The couple bought their first caravan in 2018 as a mobile shop selling fruit in the harvest season, along with coffee and real fruit ice creams all year round, as well as strawberry waffles.

"It's an opportunity for us to have almost zero wastage. All the seconds that we get or don't sell through the shop, we chop them and freeze them, and that's what we use for our ice cream."

With a stockpile of their own-grown frozen berries, they can keep their ice cream caravan at the Clevedon Farmers' Market all through winter.

The caravans also allow the business to support local events and can even be hired for birthday parties.

Diana says a small number of berries are sold through The Produce Company to supply a few Auckland restaurants. Clevedon Strawberries also produces its own jam and strawberry vinegar made offsite by a chef.

As the business has evolved, it has attracted preschool and school visits as well as social clubs. Diana offers a brief talk about growing strawberries and their business journey.

"I could talk people's ears off about it," she laughs.

Despite the busy spring and summer months, Diana still loves running the business with Kevin.

"It's like having a baby. You go through all this pain, and then you forget it," she says. "And then you go and do it again. We know how busy we get, we know how hectic it can be, we know we're going to struggle to get staff, and we know we have to worry about the weather, but we do it again.