We start this update as usual with a gas chart.

The TTF gas price for December closed at over 125 euros per megawatt-hour on Thursday, as it did on Wednesday. This morning, the gas price was just below that price level. View the current figures here.

The gas price seems to have stabilized this week, except for a dip in the price mid-week. Last Friday morning's gas price is almost the same as last Monday's.

AgroEnergy traditionally analyses the energy week. In the update, we read about low daily gas prices, although the price started to rise again mid-week. The energy specialists write: "The price effect was as violent as the fall last week: from 30 to 75 €ct/m3 within one day. This is a logical move because, without an acute gas surplus, the daily gas price should be about the same as the price for the coming winter months."

A glance at the Hague fill rate update and also the European fill rates shows that the storages are still very full. In the Netherlands, the fill rate only dropped by 0.2%. Still, 'we' are economical, with gas consumption down 33.1% this week compared to the past three years. 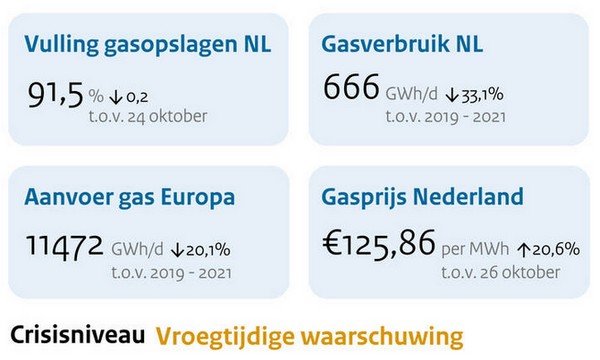 Back to AgroEnergy's update then. Here they also point to the above figures but note that it is "striking" that on Wednesday, the gas price for the coming winter months and the months further into 2023 rose along with the daily gas price. This is in juxtaposition to the LNG price in Asia. That was lower by 93 euro cents per cubic meter for December and also by €1.05 per cubic meter for the first quarter of 2023.

Moving forward, gas prices through 2025 remain in scarcity mode, AgroEnergy continues in the update. "We also see a significant price difference between TTF and with LNG in Asia for 2024. There is also a difference for 2025 but less extreme. For 2026, prices in both areas are over 40 €ct/m3, which we can consider a normal price."

With still no real cold and plenty of LNG supply, the TTF daily gas price should be able to ensure that the TTF price approaches the Asian LNG price, or about 90 €ct/m3. The same applies to the price for the coming winter months. What is striking, according to energy specialists, is that TTF for delivery in December and the months after is still quoting considerably higher. At AgroEnergy, they point out that the EU package of measures expected at the end of November is affecting this. Read AgroEnergy's full update here.

The Autoriteit Financiële Markten (Financial Markets Authority) does not support the European gas cap proposal. The AFM says that, despite exceptionally high gas prices and volatility, the TTF has continued to function adequately. "The call for measures to lower gas prices is understandable, but technical measures on the gas mining market are not a solution to the emerging imbalance between supply and demand. The gas mining market is best served by measures that support efficient price formation and stable liquidity. Generic interventions, such as setting a maximum price at which gas can be traded, can seriously distort the functioning of this market and have unintended negative consequences. More effective is to address the underlying problem by reducing the demand for gas and organizing joint European procurement of gas." Read the full AFM notice here.

The high TTF gas prices have attracted the attention of regulators. The regulators, including the Dutch ACM, are going to monitor market developments more closely. Insider trading and market manipulation are prohibited. Read the message at the ACM here, based on this message from ACER, the European equivalent of the ACM.

The International Energy Agency warns of a 30-billion-cubic-meter gap in Europe's gas supply if Russia stops supplying and China starts pulling hard on LNG. Filling our storages for the winter of 2023-2024 will then become even more difficult (and expensive?) than for this winter. Check out the whole IEA report explaining this with graphical representations, like the one below.

Energy expert Aad Correljé ("If China needs its own gas next year, we will also have a serious gas shortage in Europe") and energy expert Remco de Boer ("The chance of things going wrong next winter is very high") responded to the IEA's warning on BNR. The IEA mainly advises savings because just getting extra gas from somewhere isn't easy in a global market where everyone is chasing gas and where production can't just go up like that.

If you have an hour to spare, you can watch the online Energy talk by Glastuinbouw Nederland on 3 November here.

BNR quotes a report from the Bank of England. The bank sees a gloomy outlook for the British economy, raises interest rates, and warns of 2 years of recession, "the longest recession ever." Read more here.