"Before the pandemic, food poverty was a major problem in Sweden"

Consumers and companies in the Scandinavian countries, often seen as more affluent markets, are also feeling the effects of global inflation and higher energy prices, which causes people to turn away from healthy fresh produce to instead buy cheaper processed foods.

So important is the issue of ensuring consumers continue to enjoy and be able to afford healthy fresh produce that a leading Swedish fresh produce company had a high-level meeting with Stefan Ingves, the Governor of Sweden's central bank, Sveriges Riksbank, to discuss the consequences of inflation and increasing costs. The Greenfood Group, one of northern Europe's leading fresh fruit and vegetables and pre-cut salads, informed the governor of the challenges. 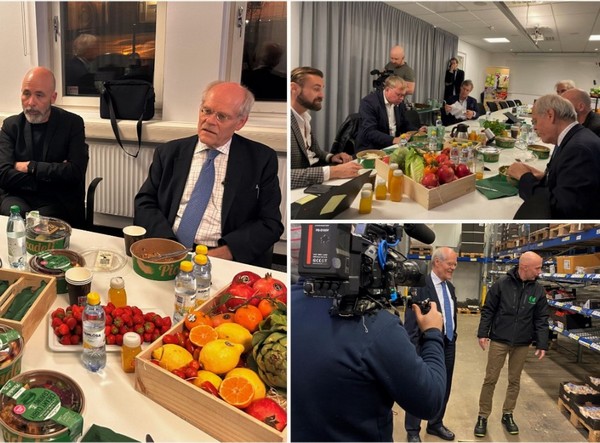 In a statement, the company said: "Rising interest rates, higher energy prices, and inflationary pressure, as well as the consequences of inflation and increasing costs, was discussed. An alarming effect of higher living costs is that consumers can't afford to choose healthier options and turn to cheaper, processed foods high in calories, sugar, and salt. In that case, it increases the risk of diet-related diseases in the long run. Eating food with good nutrients, such as vegetables, correlates with staying healthy and avoiding many common lifestyle diseases."

Confirming this view and further commenting is Anne Lunde Dinesen, from the National samordnare Stadsmissionens matcentraler, an NGO that distributes food to people in need across Stockholm and Sweden. "Even before the pandemic and high inflation, food poverty was a major problem in Sweden. Today, 700,000 people live in financial vulnerability, which means that they are forced to deprioritize food purchases and buy only the cheapest groceries. Stadsmissionen's food center contributes to alleviating food poverty by conveying about 250 tons of food to people in vulnerability every month. Not a solution to poverty, but an emergency help."

In the latest business survey results for Sweden released this week by the Riksbank, it states: "The economic situation is still good. But there are now more and more signs that demand is starting to wane. In recent years, demand has been strong, and together with production and supply disruptions and a shortage of important inputs, this has led to rapidly rising costs and higher prices. Prices are now being raised more often and in larger increments than before. In trade, for example, extra staff have been hired in order to have time to change prices as costs increase. It has also become difficult to reach agreements on prices for deliveries later in time because the uncertainty about the costs is great."

A few companies in the fresh produce chain in the Scandinavian region did not survive after the lockdowns and forced closures during and after the pandemic. This further contributed to less choice and availability of healthy and fresh food options.

Magnus Nilsson, from Ewerman AB, one of the Greenfood subsidiaries in Sweden, confirmed markets in their region are not spared from the global effects of inflation. "I think that we are struggling with the same challenges as the rest of Europe. A high inflation, but with a weaker currency. We just have to adapt our cost levels as fast as possible and ride through this storm."