After two decades of overall decline

US vegetable availability increased in 2020

The overall amount of vegetables available for consumption in the United States decreased by 6 percent over the last two decades to 382.5 pounds per capita in 2020 from 407.3 pounds in 2001.

However, vegetable availability rebounded in 2020 from 371.6 pounds in 2019. The vegetable food group is composed of five main subgroups: legumes, other vegetables, dark green, red, and orange (including tomatoes), and starchy (including potatoes). Each offers an array of important vitamins, minerals, and dietary fiber. From 2001 to 2020, the combined share of legumes, dark green vegetables, and red and orange vegetables available to eat in the United States increased to more than 44 percent from 36 percent of total vegetables. 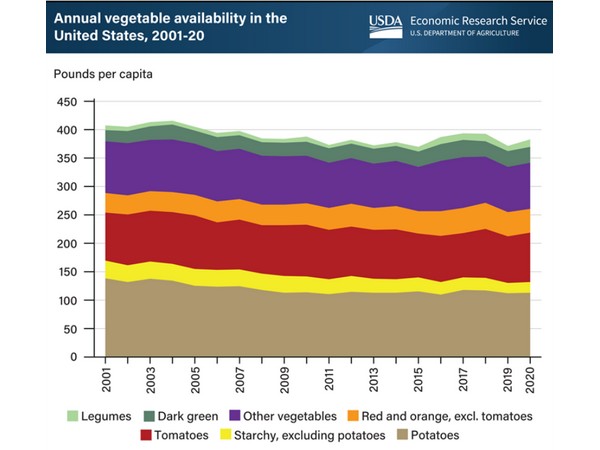 Availability of legumes, including beans and peas, increased the most over this period—led by an almost 500-percent jump in dry peas—adding additional variety for US consumers. Some vegetable subgroups have increased in popularity, while others have seen declines. Starchy vegetables and “other vegetables,” a subgroup containing 16 different vegetables, declined to 56 percent of total available vegetables in 2020 from 64 percent in 2001. ERS’s Food Availability (Per Capita) Data System (FADS) provides annual estimates of the per-capita availability for more than 200 food commodities consumed in the United States.