The Dutch greenhouse vegetable season is quickly nearing its end at Oxin Growers. The open field season is, however, ongoing, and the new top fruit season is gaining momentum. "Open field and greenhouse vegetables all got off to a tough preseason start," begins Ruud den Boer, who has now been this growers' association's commercial manager for a year.

"That counts for products like leeks, chicory, and broccoli, and greenhouse vegetables-wide except for cucumber. However, starting in the summer, everything picked up. For bell peppers, that's different from other years, when they often had better pre than post-seasons. That sector's sentiment is thus very different than if the situation had been reversed." 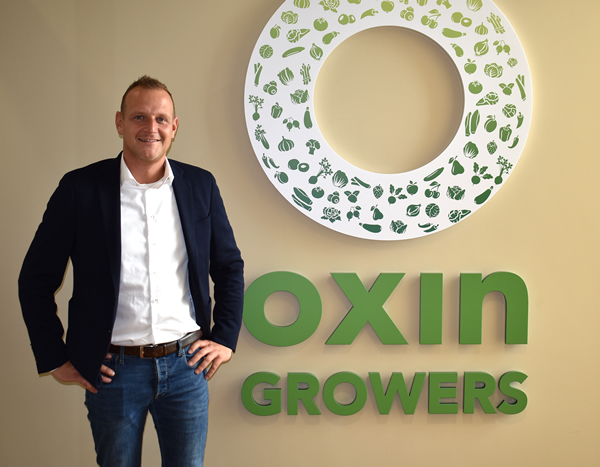 For the coming year, Oxin Growers is expecting growth in all its product groups. The cooperative is even adding 110 hectares to its bell pepper, tomato, and specialty acreage. Growers stopping and selling their farms means they lost some area, but expansion is a reality. "Bringing in new growers is critical to our commercial team's work. We operate in an aging market, and there's general scaling up," says Ruud.

"So, we're trying to find more future-proof growers. Next season, we're expanding our acreage considerably. It remains to be seen what the overall picture will be. For now, growers are deciding on how to organize their crops. The current energy prices make it unclear which growers will use 100% of their greenhouse and which only part or,  perhaps, none at all. Things will come clearer next month."

"The present economic situation means many people are tightening their belts. Fortunately, recently, certain conventional products' prices were so high we could still sell the organic ones too. But we're not expecting any expansion in the organic segment in the coming year," Ruud continues.

'Stick to what you know best'
Oxin Growers' share of lit cultivation will begin dropping sharply, too, due to the energy prices. But, so far, that is no reason for this growers' cooperative to find new growers in southern Europe. "We're sticking to our last Dutch and Belgian products. We prefer to stick to what we know best but are open to anything that benefits Oxin Growers." With higher payout prices later in the year, Oxin Growers can speak of a reasonable year, according to the commercial manager.

Yet, the past season was not without its challenges. Since April this year, the cooperative has been back at the trade center in Barendrecht, which has since been renamed 'Kiem'. A fire means they had to relocate for 18 months. "We now again have great facilities, all on one floor. Oxin Growers is truly being established here. Recently we've had many conversations to get a clear idea of who we are and where we want to go, both within the organization and with our growers," Ruud explains.

Trading partner, Levarht's bankruptcy hit Oxin Growers hard. "It took a lot of time to deal with that. Yet, it's amazing how quickly other parties picked up those volumes. Our regular marketing partners, Combilo and Scherpenhuizen, played a major role in this, as did the other trading companies with which we do business. That just goes to show there's nothing as fluid as the fruit and vegetable market."

For marketing, Oxin Growers growers can choose between the collective model or being affiliated one-on-one with a trading partner. "Many trading companies have specific requirements, and Oxin Growers are an ideal partner for that. We have growers who deliver their product in cubic boxes, but also directly in the final packaging," says Ruud.

"We're also fully active in advocacy. Our commercial director, Ton van Dalen has recently been very busy with that on behalf of the cooperative. He has been talking with various organizations, authorities, and NGOs. Dutch horticulture faces major challenges, and grower associations have a common interest in that. For example, for growers, nearly all raw material costs have risen significantly," says Ruud.

"But, can that be passed on to customers? We're currently fighting hard for that." Den Boer focuses more on the operational side. As a merger from Van Nature and Best of Four, Oxin Growers is a cooperative par excellence. Further merger talks are currently not in the pipeline, though, he says. "We're a nice, stable organization with a great group of growers who want to move forward," Ruud concludes.