"At least 2.5 ha and cycling different crops to be profitable with organic greenhouse cultivation"

As demand steers toward more sustainable modes of production, some growers are eyeing organic cultivation with increasing interest. Greenhouse builder Bom Group has recently been working on such a project in Germany. “We are currently building an organic greenhouse in Germany for a grower who is a long-term returning good client,” Lodewijk Wardenburg from Bom Group says. Being an organic project means that the crop will be grown in the soil inside the greenhouse. “That also means that you’d need a big infrastructure because in the organic space, you need scale to be profitable.”

A notable example is the difference between the German and Dutch approaches to greenhouses. Lodewijk indeed says that German growers have historically preferred medium-sized greenhouses, unlike the Dutch. “As the global situation started to change, however, you could see a shift happening,” he points out. “For this project, the grower wanted to build just 1 hectare, even though we suggested that the best course of action would be to go for 2.5 ha. After one year, they called me and made me promise not to get angry: they wanted to go ahead with the 2.5ha project,” he chuckles. “To me, that’s a very satisfied customer. We have built multiple greenhouses for them, so they could experience first-hand what to expect from us.”

The complexity of organic greenhouses
Growing organic is more expensive than more traditional cultivation methods, but Bom Group has come up with an infrastructure that easily accommodates such a production process. “Organic greenhouses are different from traditional ones,” he points out. “According to the German rules, for produce to be considered organic, it needs to be grown in soil with no chemicals. This opens up a whole new set of challenges, especially when it comes to protecting plants from pathogens and all of that. While the grower should be coming up with a spot-on IPM regiment, our organic greenhouse design stands 7 meters high Twinlight Colums. In this way, not only you’d get more light, but it’s also cheaper than a more traditional greenhouse. Coupled with our heating systems that push hot air up all at once, an organic greenhouse grower can rest assured that nothing is left to chance.”

According to Lodewijk, the organic sector is growing. “Big growers choose Bom because organic is an upcoming market,” he says. “But it is also a risky market because of the challenges of organic cultivation, which makes operational costs quite substantial. That is why it is crucial to have at least 2.5 ha of organic greenhouse cultivation and cycling different crops.” This also means that small-medium-sized growers would struggle to enter this space because of the cost barrier. “But the small greenhouse is also a market. Traditional cultivation is also a market,” Lodewijk points out. “At the same time, there are small organic greenhouse growers who do everything by hand instead of using automated systems. After all, if the space is only so big, you don’t need any fancy equipment. But if you have, say, 4 ha, you’d need much more time and labor. That is why we have designed a specific greenhouse for organic growers.”

Glass supply
Recently, the glass arrived at the construction site of this latest Bom’s organic greenhouse in Germany. This doesn’t anyway mean that sourcing material is a walk in the park nowadays. “This project was first discussed last year’s Christmas,” he explains. “We have good contact with our materials guys, despite the lack of glass manufacturers in Europe.” Lodewijk indeed explains that there used to be two big manufacturers of glass in Europe. However, in 2021, one of them stopped producing glass for greenhouses. “So, there was just one company delivering glass. Fortunately, very early, we made a deal with them, and that’s why we could get the glass for this project.” 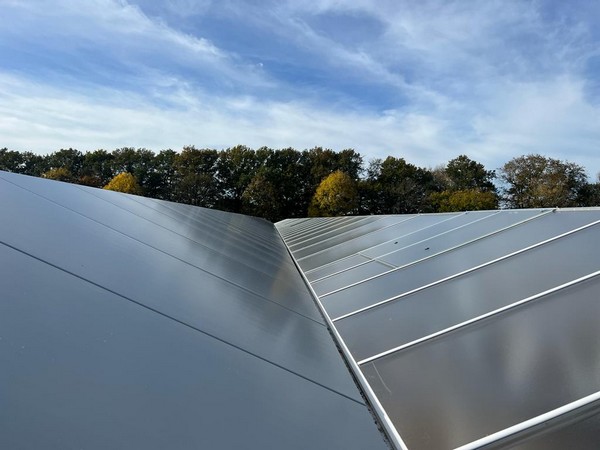 Yet, there are a few things a grower has to be aware of when building a new greenhouse. “You need to start even earlier than it used to be,” says Lodewijk. “The grower approved the project in January, and we got the glass just a few weeks ago. This was particularly crucial in this situation because the infrastructure needs to be in place before winter hits hard, else the soil would be negatively affected.” 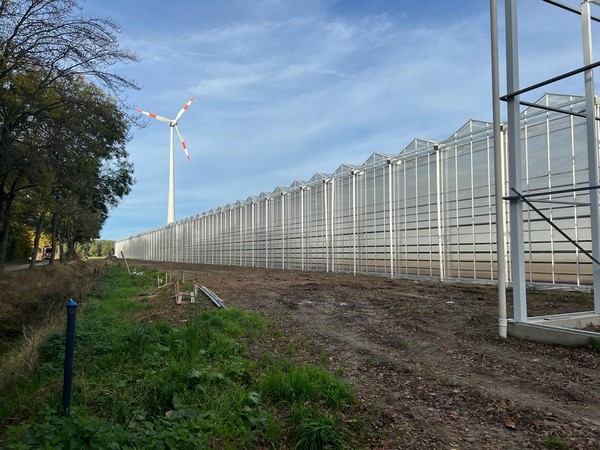 The biggest challenge for Bom Group to source glass happened during the peak of COVID, of course. “The delivery time was up to 1 year,” he says. “For chips or ventilators, sometimes, even now, we are still confronted with long delivery times. But currently, the delivery time for glass is now around four months. All in all, from COVID supply chain disruptions, we have learned that if a grower wants their project on time, then they must start early. For instance, if a project needs to be operational in 2023, then right now is the time to start.”