Strawberry season shortened, more product on the market at the same time

Strawberry growers are facing huge cost increases, which will make them adjust their growing strategy for the coming season, and consumers will see their wallets emptying, which may make them abandon strawberries more often. Rabobank analysts expect that this combination could cause strawberries to become a seasonal product again. 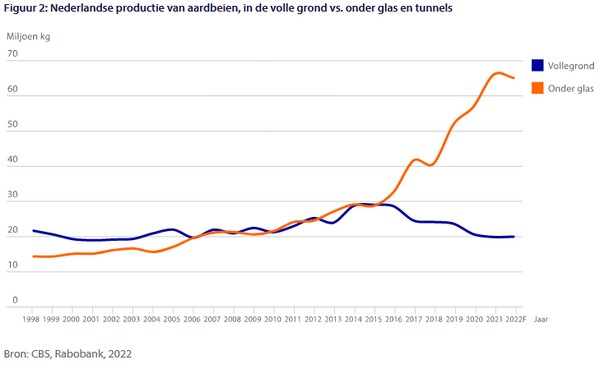 Due to high energy prices, production of greenhouse strawberries in north-western Europe in the months of January to April 2023 will be significantly lower than in recent years. Something the director of cooperative Hoogstraten, Hans van der Hallen, also recently warned about when speaking to VILT. February, in particular, looks set to be a difficult month for a winter crop with current energy prices.

The range will be largely limited to importing strawberries in the months January-April, Rabobank expects. In imports, it does not expect any major changes in supply. Spanish growers have few opportunities to increase acreage further as water and staff availability are a major challenge. They are also not taking the risk of expanding production en masse because of cost increases and the threat of lower consumer purchases.

During May, June, and July, analysts are instead counting on an increased supply of strawberries. This is because local greenhouse strawberries, as well as covered strawberries and those grown outdoors, will enter the market. In certain weeks, this may create price pressure. But to what extent will, as always, largely depend on weather conditions.

High kg price
On the consumer side, strawberries are already on sale at higher prices than many other products. Rabobank, for instance, compares strawberries' prices with other fruits and states that the kilogram price of strawberries is double on average.

In the Netherlands and the UK, strawberries are the third-largest fruit measured by turnover and the fourth-largest in Germany. Many kilos of strawberries are bought at a relatively high kg price. 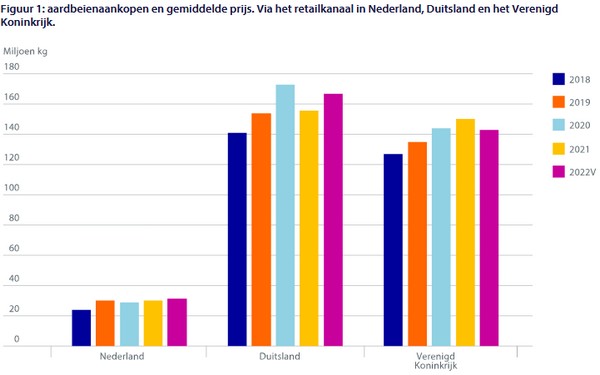 Strawberry purchases. Through the retail channel in the Netherlands, Germany, and the UK. Source: Kantar, GFK, GroentenFruit Huis, 2022. Note on figures: 2022 is an estimate based on first-half figures. UK figures are based on 52 weeks to 7 August. Prices are in EUR/kg for the Netherlands and Germany and GBP/kg for the UK.

Strawberries have a higher kg price than apples, oranges, and bananas, for example, due to higher production costs. This theoretically makes the product more sensitive to changes in purchases if prices rise and/or consumers have less to spend.

In the UK, analysts see that purchases of fresh strawberries have fallen recently after years of increase. "Nevertheless, we should be cautious about drawing causes and conclusions from these figures," write Cindy van Rijswick and Arne Bac. "Due to the COVID pandemic and related restaurant closures, 2020 and 2021 were not normal years and, therefore, not good comparators. Also, the British pound has been depreciating since April 2022, making imported strawberries more expensive in the UK."

In the Netherlands and Germany, supermarket purchases of strawberries in the first half of 2022 actually showed an increase compared to the same period in the previous year. This is despite the lifting of catering restrictions and falling disposable incomes. Here, strawberry prices may have played a role. Strawberries were cheaper in the first half of this year than last year. 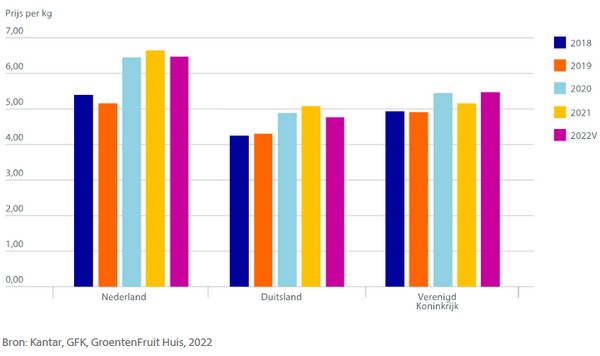 Average price strawberries through the retail channel in the Netherlands, Germany, and the UK. Note on figures: 2022 is an estimate based on first-half figures. UK figures are based on 52 weeks to 7 August. Prices are in EUR/kg for the Netherlands and Germany and GBP/kg for the UK. Source: Kantar, GFK, GroentenFruit Huis, 2022.

There is a correlation between strawberry prices and consumer purchases
We are only going to see the biggest impact of inflation and falling disposable incomes in the last quarter of 2022 and in the first months of 2023. This is also the season when relatively few strawberries are bought. Although fresh strawberries are available all year round, it is still a seasonal product, the bank says.

In the Netherlands, almost 40 percent of strawberries are sold in the two top months (May and June). In Germany, it is even around 55%. At Rabobank, they expect the current situation to reinforce the seasonal nature of strawberries. An even higher proportion of strawberries will be sold when supply is high, and prices are generally low. After comparing strawberry sales volumes and supermarket prices over the past five years for the Netherlands, the UK, and Germany, the analysts find that it can be concluded that there is a negative correlation. Thus, when prices are higher, fewer strawberries are bought.

For the longer term, the bank is not worried about the popularity of strawberries and other soft fruits. Soft fruits have been rising in popularity for years. This is partly at the expense of traditionally popular products such as apples and bananas. "We do not expect an end to this trend, but rather a (temporary) shift in, e.g., choice of purchase channel for strawberries and moments of purchase, e.g., especially during promotions."

What the analysts see happening in a crisis situation for food products, in general, is that consumers will 'downshift,' both in channels and products. "Spending is partly shifting from the food service channel to the retail channel, but also from a specialty shop to supermarket and from supermarket to discount supermarket. The market share of discount supermarkets in the Netherlands and the UK, for example, increased during 2022. When downgrading products, we see consumers buying more offers, cheaper variants, or smaller packaging units."

Consumer behavior remains very difficult to predict, but analysts do give a warning to the above. For example, consumer purchases of apples fell in the first half of 2022 even though they were cheaper compared to the same period a year earlier.

Lots of variation day-on-day, but fairly stable year-on-year
The strawberry sector is used to large, sometimes abrupt fluctuations in supply, demand, and price. In that respect, 2023 will also be another 'normal' abnormal season. What is new are the big cost increases for growers and other chain parties. "We have not seen these in this magnitude before, and they will be the biggest challenge for the coming year. Even bigger than changing market demand, we expect."

Looking beyond a single growing season, the analysts see a fairly stable market in which average full-season grower prices do not vary very much from year to year. "The challenge in this sector remains to respond to the hectic pace of the day as much as possible, for example, with attractive promotions when supply is high while keeping the long-term view in mind."

The various risk mitigation strategies are already being widely used by growers. Think of cooperation within demand-driven chains where chain partners also absorb part of the cost increases, combining different growing systems (greenhouse, racking, outdoors) or combining with a completely different crop. Other things that can contribute to less risk are automation, data-driven growing, growing different varieties, growing out of the ground (in substrate), tunnels or greenhouses to get a more predictable production.