At Wageningen University & Research in Bleiswijk, researchers are demonstrating how growers can grow more economically. Numerous crops have already been shown to be (much) more economical. Frank Kempkes, researcher in Energy and Greenhouse Climate at Wageningen University & Research in Bleiswijk, pronounces that the heat requirement of a conventional horticultural business can still be halved with a combination of techniques. He does so in no. 2, 2022, of the university magazine 'Wageningen World.' Below is a piece from that story.

Experience has been gained in greenhouses, without gas, with better insulation, heat pumps, economical LED lighting, and well-thought-out climate control. One of the challenges of optimal insulation with low ventilation is humidity; if it rises too high, fungal diseases can rear their heads. "With freesia, we started to better adjust the lighting to the growth stage," says Kempkes. "A young plant gets little light, a large one more, up to a certain maximum. In doing so, we have greatly reduced the electricity consumption of the lamps, and growers have become more aware that lighting more is often of no use."

The story mentions orchid grower Van der Hoorn from Ter Aar as an example of a grower who has moved away from gas. It is now known that this grower went bankrupt despite using a greenhouse without gas. 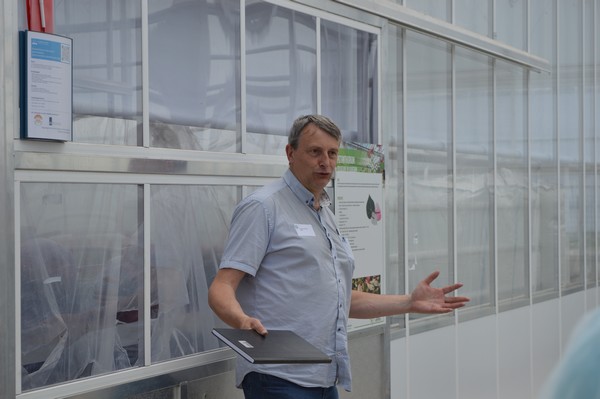 Frank Kempkes during a tour of the demonstration greenhouses in Bleiswijk on the closing day of the 2022 Autonomous Greenhouse Challenge.

The greenhouses in Bleiswijk also run without gas. Heating and lighting are electric. That is also the future, Kempkes thinks. He sees a future in a combination of techniques to halve the heat requirement of a conventional horticultural company. The researcher mentions seasonal heat storage, where there is still work to be done both technically and financially, but also switching to more economical LED lighting.