Following last month’s Hurricane Ian that made its way through Florida, the upcoming strawberry season will see a later start. “They’re at least a week to 10-12 days behind schedule because of the storm. The only good thing about the hurricanes is that you at least have some warning,” says Guynn of Guynn Family Produce Sales Inc. “So we didn’t set plants because we knew it was coming.”

While planting its strawberry plants gets going generally between October 2-17, this year it’s still planting currently, though it is about 80 percent finished. “After the storm, nothing was unrepairable. There was some flooding and plastic damage. So we lost about 10 days because it was either too wet afterward or we had to fix plastic and then set the plants,” says Guynn.

Of course, that means volume for Florida strawberries will come on slightly later too. “We’re primarily bare-root plants. Some other growers do more tray or plug plants and those typically produce a little quicker because they’re not as distressed as a bare root,” says Guynn. “Typically we are right around Thanksgiving and I think we’ll be early December now--probably December 5th for pallet volumes.” 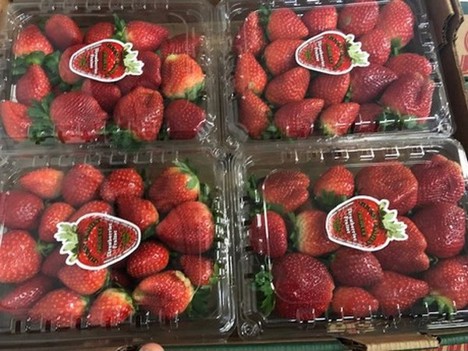 Florida to Georgia transition
That production should go into mid to late March--generally any later in Florida and the heat influences the commercial value of the plants. From there for Guynn Family Produce, it will move into the first year with a strawberry farm in Georgia which will take production through April.

As for the effect on pricing for the season, it may be a challenge to keep pricing on the stronger side, a concern given growers such as Guynn continue to absorb inflationary production input costs.

“Strawberries are so perishable. If you’re on the same page with retailers with pricing, that’s okay. But the rest of the distribution chain, it’s supply and demand,” says Guynn, who notes that strawberry pricing is generally only up 10-15 percent of what it was even some 15 years ago. “If we’re picking too many, it’s not like we can dig our heels in and demand a certain price. You don’t have time with strawberries while you can almost relax with vegetables for example.”