In 2022, the number of Dutch organic greenhouse growers fell by ten to 114. They grow on more than 165 hectares. At 95, there are 13 fewer greenhouse vegetable growers, but there are a few more ornamental crops and berry growers. For ornamental crops, that means increased acreage, but not for berries. According to the Central Bureau of Statistics (CBS) preliminary 2022 figures, that area has actually halved.

Of the 95 Dutch organic greenhouse growers, 93 are certified, and two are converting. Thirty-two cultivate cucumbers, 37 bell peppers, and 40 tomatoes. Thirty-four of these companies also propagate greenhouse organic vegetables. And 55 companies grow other greenhouse vegetables, like eggplants and salad crops, too.

Remarkably, the number of small fruit greenhouse growers has risen from six to eight. Yet, that acreage has more than halved, going from 4.3 to two hectares, and only half of that is certified. In 2022, one ornamental plant grower was added, and the acreage increased by 4,600m2 to nearly 8.9 hectares, say CBS statisticians. 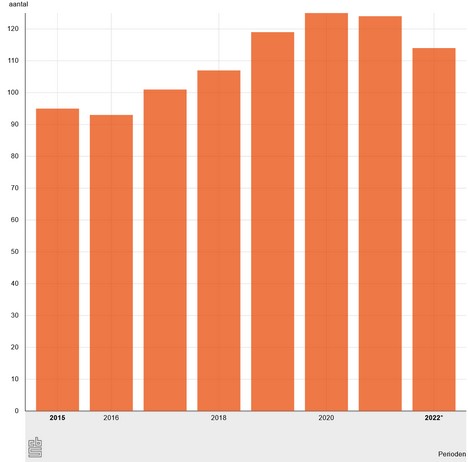 Greenhouse horticulture and the number of organic companies (certified or not).

In a general report, the CBS points out that, since 2015, there have been 585 more organic agriculture companies. That is a 42.8% increase. At just over 80,000 hectares, there is now 3.6% more organic farmland than in 2021. There are 19 more greenhouse horticulturalists than in 2015, which increases that area by 52 hectares.

Acreage of horticulture under glass (certified or not).