"Don't wait until you see the first aphid"

A new aphid that was hard to keep under control surfaced in pepper cultivation and at some ornamental growers last year. After internal research, it turned out to be a variant of the green peach aphid that is less sensitive to chemical agents. Against this, Koppert recommends a more intensive biological approach and, above all, preventive use of pesticides. 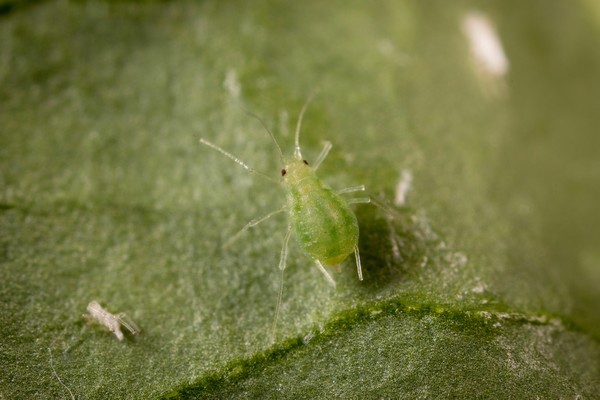 During the previous growing season, green peach aphids (Myzus persicae) caused problems, particularly in sweet pepper. These were insufficient to poorly controlled with the pesticides available for aphids. Was this an unknown aphid species or a new variant? Koppert researchers have since established that it is indeed a green peach aphid.

"Last autumn, we noticed that the aphids were less easy to eliminate. Also, in the first months of this growing season, growers did not manage to kill the aphids as easily, despite the clean start of cultivation," says Koppert consultant Lisa Broekhuizen. "Aphids remained, and plaque was already forming here and there, a sign of hot spots."

More than half of the Dutch pepper crop appears to suffer from this initially unknown aphid species. The mysterious variant also turned up in ornamental plant cultivation. Consultant Tom Konijn: "A Bouvardi grower noticed that he could no longer get rid of the aphids. Despite correctly carrying out treatments, almost half remained.

Determine
"These aphids also show different behavior. For instance, they drop themselves faster when you tap the plant, and the red ones you normally see in a population were missing," Lisa says.

To solve the riddle, several consultants sent samples for examination to the internal 'Samples and Diagnostics' department. Through a determination key, Onne Isfordink was able to eliminate the suspicion that another aphid species - the violet aphid - was involved. Lisa: "That it was peach aphids after all was confirmed by our R&D using DNA technology."

Narrowing resource package
The narrowing of the resource package is one of the reasons that this variant is less susceptible to chemistry, according to the consultants. "As a result, growers, out of necessity, lean too much on the one pesticide that can still be used. Especially in conditions where biology is not yet at strength, such as at the beginning of cultivation in the dark winter period," Tom argues. "There are still broad-spectrum agents that control aphids better, but they cannot be combined with biological control agents," Lisa adds.

The consultants still see some growers reaching for chemicals first when detecting aphid infestations because it is easy and gives quick results. But the long-term effect is actually extra detrimental. "Biology requires more patience, and you often have to tolerate some spot damage to build a population of natural enemies first. If necessary, at a later stage, you can still correct this. The advantage is that the natural enemies fight the last aphids. With a one-sided approach, you won't last a season."

Convincing growers of this is part of the consultants' daily conversation. That won't change with the new variant of green peach aphid. Because the message is: to prevent resistance, use more biological control and also use preventive pest control. Lisa: "So don't wait until you see the first aphid." Tom: "Growers have to get used to using biology preventively rather than curatively, so they can keep the sprayer in the cupboard for as long as possible. That's the only way to prevent aphid resistance."

Generalists and specialists
The discovery of the new variant of peach aphid prompted Koppert to take another look at its entire aphid control package. Lisa: "We have generalists and specific pest controllers. Generalists like gall midges and lacewings eat aphids directly and work well on hot spots. A parasitic wasp like the Aphidius colemani (Aphipar) is a specialist that parasitizes the peach aphid throughout the crop."

It will have to be a combination of gall midges, lacewings, and parasitic wasps, she thinks. "The parasitic wasps are good at keeping the aphid in check, although this can be difficult in dark winter weather. Therefore, we are considering early supplementation with lacewings. However, the release of lacewing eggs, Chrysopa-E, must be well spaced out because if the dose is too high, they will eat each other," Lisa explains.

Good scouting is crucial
The consultants are used to advising growers and crop protection managers on strategy. "But equally important are the staff who top and turn and harvest the peppers. They look at each plant every day. So they can also scout out the first aphids in the crop. It is important that they report their finds immediately and mark them with a clip at the top of the wire," says Lisa.

Often, those people don't speak much Dutch, so instruction on different pests can be done well by showing pictures of the different pests in the canteen. "Early detection of pests is very important. In many cases, we see that companies where scouting is very good, the problems with aphids can be brought back under control faster," she observes.

'Know and recognize' courses are also run at Koppert to teach employees of horticultural companies how to effectively scout for pests.