Superb Herb's range of potted and cut products now get to customers fresher than ever, thanks to developments at its northwest Auckland growing facility. By chilling the harvesting, packing, and loading areas, there's been an estimated gain of up to three days in Superb Herb products' shelf life, says managing director Ken Rogers.

"It's going to improve the quality of our herbs because we can now control the cool chain from harvest through to the customer."

The company's research has found that even living herbs store better if they are chilled. "If they're placed in a hot, dark box, they will stretch looking for light. This means they elongate, which stresses the plant and uses energy," he says. "But when they're chilled, they're in a dormant state and not stressed, which means their shelf life is increased by two to three days."

Superb Herb was set up by the Pike family in the west Auckland suburb of Henderson, and Ken joined in 2014 after working here and overseas in the dairy and wine industries. But being based in the Waitakere Heritage Area, the writing was on the wall when it came to the future expansion of its eight-hectare site. 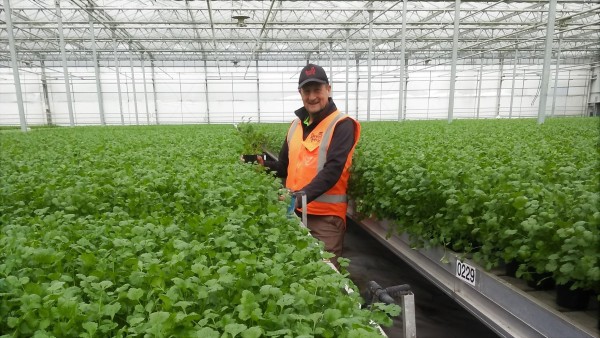 Ken Rogers in Superb Herb's new growing area, which is kept at an optimum temperature for quality control of the herbs

Converting the operation
So, a 29ha former dairy farm at Parakai, which had been converted into an orchid-growing operation, was purchased in 2013. There was already 2.3ha of covered growing space, with another 1.2ha of high-tech automated glasshouse added by the company in 2019.

"We're trying new ideas and technology all the time," Ken says. "The market's growing, and we're growing with it."

The company accounts for more than half of fresh herb sales in New Zealand, with output spread evenly between potted and cut herbs. The most popular are coriander, basil, and mint, with microgreens a newer area that has great long-term potential.

Around one hectare of outdoor herbs are also grown, mainly rosemary and bay. As well as supplying supermarkets and restaurants throughout the country with around 30 different herbs, My Food Bag has also been an important long-term customer. "They've really helped to develop the market because they've introduced a greater range of herbs to people who have then carried on using them," he says.

Export
The company has also exported its herbs to Hong Kong for several years, where they sell at supermarkets rather than traditional markets. "We were knocked around by Covid-19, but thankfully people continued to use herbs."

It was also a challenging time locally, with the workforce of almost 70 divided into two shifts to help manage the risk of a Covid outbreak. "Logistics was the main challenge, but we kept product supply up to our customers," Ken says. "We've done pretty well and rarely let our customers down."

It was hoped to get the recent chilled harvest, packhouse, and distribution facility operating by March this year, but that was delayed until July due to material supply issues. "We have made a significant investment in new technology to not only improve product quality but also to improve the efficiency of our growing operations," Ken says.

Automated development
"Our automated glasshouse development has enabled a lot of the repetitive manual work to be engineered out."

There's robotic seeding of herbs with two further robots, then spacing the seedlings out into an ebb and flow table growing system, which the company developed with Apex Greenhouses and Codema. The seedlings are then moved by a rail system to the growing area, which has computer-controlled climate management systems, including roof and wall venting and an efficient natural gas boiler for winter heating.

Shading is provided by solar screens installed in the roof space, along with thermal screens that can be rolled out at night to trap the heat of the day. Overhead watering and spraying can be carried out if needed via an automated Visser system, which moves up and down the rows.

The company's target is to have 100 percent of the water used in growing operations supplied from stored rainwater collected from greenhouse roofs. Water used in irrigation is filtered through biofilters, treated with ultraviolet (UV) light, and recycled, making use of water and nutrients very efficient.

"The only water going out of the system is through transpiration or in plants we're sending out to customers," says Ken.

Hygiene
Nutrient levels are constantly monitored and adjusted with a Codema computer system. They are checked by an in-house agronomist, who is also responsible for training staff to scout for insect pests and apply organic sprays required under their integrated pest management (IPM) system.

Plastic seedling pots are sterilized after use and reused. Containers used for cut herb packaging are formed from recycled PET (polyethylene terephthalate) purchased from a New Zealand-based recycler, Reuse.

Recycling initiatives are all part of the business's drive for sustainability while at the same time providing the best packaging to maintain good shelf life, which in turn reduces food waste.

"Relocating our packhouse and distribution operation from Henderson to Parakai was achieved by recladding part of the Apex glasshouse working area with chiller panels. Now the area, where temperatures could get up to the high 20 degrees or even low 30s, is a constant 9 degrees," Ken says. "We could go lower, but some herbs don't like that, such as basil."

And a chilled packaging area enables the use of electric pallet handling equipment to load product into refrigerated trucks in a closed loading tunnel.

"That maintains the cool chain and guarantees the quality of the product for improved customer experience."

With the new area now in full use, production has been moved completely away from the Henderson property, where the Pike family are setting up a new chili-growing operation, operating separately from Superb Herb.

And in mid-August 2022, a celebration to mark the opening was combined with the first full, Superb Herb staff gathering held since Covid-19 arrived.