For the third week in a row, the cucumber price fell on the VBT's clocks. It resulted in a middle price of rounded 41 euro cents each at the end of week 41. This puts the price below the five-year average. Pepper and tomato prices are well above average, though, as are lettuce prices.

The average price for organic cucumbers shows no decline. Since the beginning of August, the price has been very stable and increased bit by bit to an average of 70.7 euro cents in week 41.

An average rounded 1.44 euro was paid for a kilo of loose tomatoes last week. This reversed the dip in the price of week 40. In that week, a kilo yielded 1.265 euro. After the weeks before that, prices steadily rose and then remained stable for some time. At 1.44, the average price last week was almost back to the level of the second half of September.

Vine tomatoes fetched an average of 1.76 euro per kilo last week. After a dip in week 38, vine tomatoes picked up again. 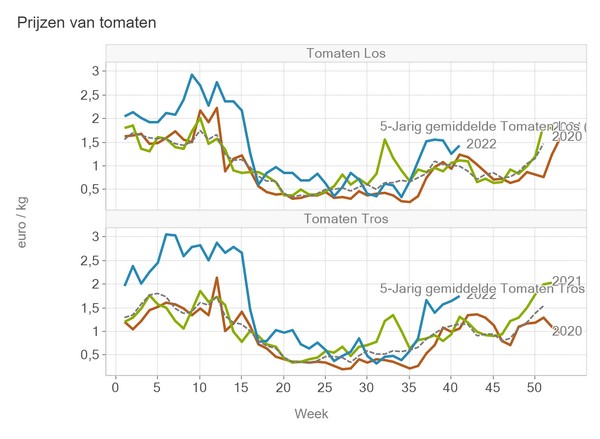 Among peppers, yellow is the best paid, with an average price per kilo of 1.644 euro in week 41. Green loses considerably and comes in at 80 euro cents, while red also loses slightly and, at rounded 98 euro cents, is just slightly lower than in week 40. 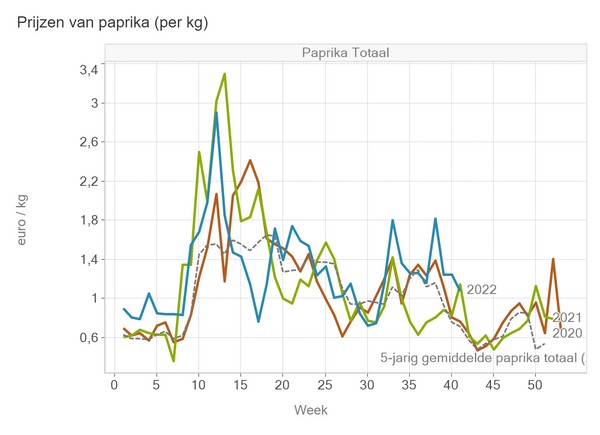 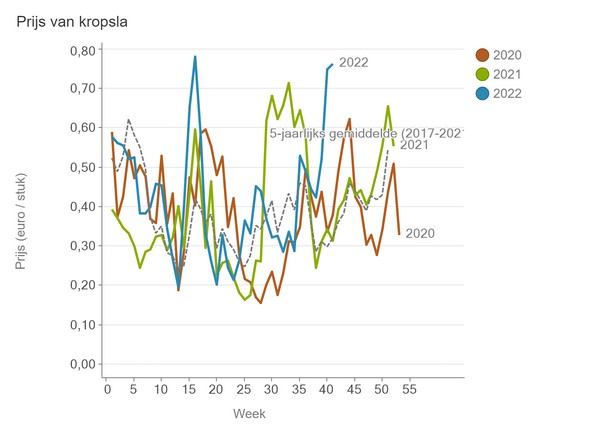 A look at the soft fruit shows that strawberry prices dropped significantly again. A kilo of Elsanta fetched just over 2.40 euro per kilo. If we lump all strawberries together, a kilo did just over 2.25 euro in week 41. The price for blackberries remains above 10 euros, reaching 10.61 euros in week 41. Raspberries fetch an average of 6.627 euros per kilo.

The above charts are from the Flemish Department of Agriculture and Fisheries' agriculture figures page. View all VBT figures for week 41 for fruit and vegetables here.