Last year marked the first time that Belgian-grown ginger appeared on shop shelves, in this case, those of Cru's experience markets. The Belgian ginger was the result of a partnership established between Colruyt Group, REO Veiling, and Provinciaal Proefcentrum voor de Groenteteelt. It proved very popular with customers of Cru. With this in mind, the pilot project now has a follow-up phase. Colruyt Group teamed up with a West Flanders salad grower who planted some 1,200 m2 of ginger. Add to that a row of 50 m2 of turmeric, and the group is now poised to launch another Belgian first. The locally grown ginger and turmeric will be available on shelves at Cru and OKay from this weekend. 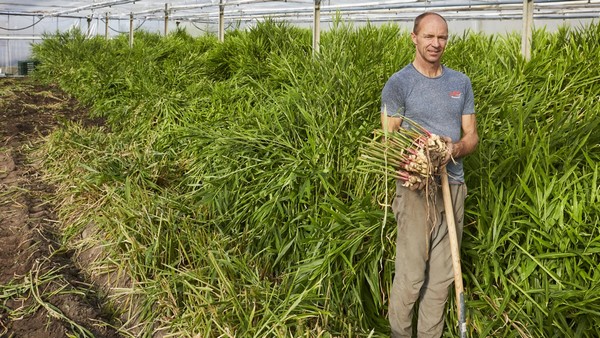 Success leads to extension
It was exactly one year ago that Colruyt Group began selling Belgian ginger for the very first time, the result of a pilot project in partnership with REO Veiling and Provinciaal Proefcentrum voor de Groenteteelt. The greenhouses at the trial center in Kruishoutem were planted with 40 m2 of ginger plants, producing a harvest of 140 kilos of fresh ginger. The ginger was then sold in Cru's experience markets, selling out in just two weeks. 'The Belgian ginger has more taste and is juicier, has fewer fibers, and is much fresher than imported ginger. And it's certainly proved popular with customers – not only did the ginger sell out quickly, but demand for fresh ginger persisted in the weeks that followed. That's why we started looking for a partner who would be interested in growing Belgian ginger on a larger scale,' ​ explains Ward Steenackers, a member of the innovation team for food at Colruyt Group. ​ ​ 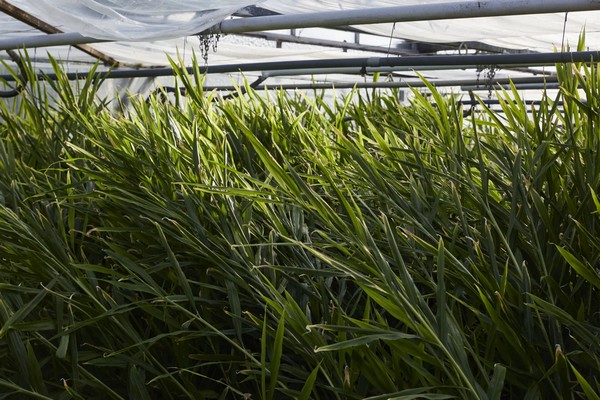 From salad greenhouse to tropical rainforest
Colruyt Group found that partner in Bart Pynnebrouck, a grower from the West Flanders town of Oostnieuwkerke. Bart grows a crop of mostly salad and beans, which finds its way to Colruyt and OKay shelves via REO Veiling. Ginger is a good complementary crop. 'Outdoor lettuce cultivation has become less popular in recent years. Ginger could be a profitable alternative for those growers who have invested in lettuce cultivation but now have empty greenhouses,' explains Jan Schockaert, head of fruit procurement at Colruyt Group.

'We were pleasantly surprised by Colruyt Group's project proposal and decided to participate with full enthusiasm. By growing ginger and turmeric, we promote our crop rotation and remain profitable for a longer period. Moreover, in this way, we actively contribute to experimenting with crops considered more exotic in Belgium. We're happy to be part of this innovative project,' confirms Bart Pynnebrouck. Grower Bart Pynnebrouck planted 1,200 m2 of ginger back in the spring. The first harvest, of some 800 kilos, took place last week. There will be another three harvests over the next few weeks. The grower is hoping for a harvest of some 4,000 kilos of Belgian ginger overall. As ginger is harvested when its foliage is still nice and green and the greenhouse is similar to a tropical rainforest, the ginger doesn't have the opportunity to harden or form a skin, which makes for a more aromatic, juicy product with no fibers. Additionally, Bart Pynnebrouck also decided to embark on the cultivation of another innovative crop and planted a row of 50 m2 of turmeric, a first for Belgium. 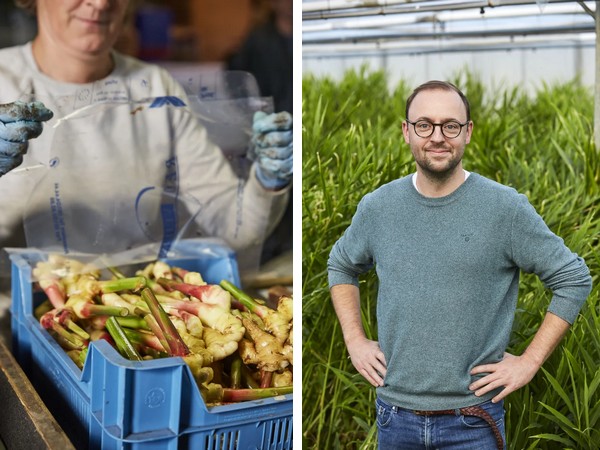 The fresh ginger will be available in four of Cru's experience markets from this weekend, as well as in more than 140 OKay neighborhood supermarkets. Due to its more limited volume, the turmeric will only be available at Cru. Still new this year, around a quarter of the freshly harvested ginger will be processed into new products. Juice maker JusJus will be offering shots of fresh ginger, ginger-turmeric, and ginger-orange starting this weekend. And at the end of October, Cru's range will be supplemented by pear-ginger jam, ginger syrup, and pickled ginger made by supplier Pipaillon.

Local and sustainable cultivation with a future
Ginger and turmeric are traditionally imported from China, Peru, and Brazil, which means that they have a fairly large carbon footprint. Colruyt Group can thus see a great many benefits in fostering local ginger cultivation. A short chain is a positive for the environment. It requires less transport and produces fewer CO2 emissions. Growers also benefit from the additional crop, allowing them to make better use of their greenhouse space. As only a minimum of raw materials and no pesticides go into its production, plus with minimal energy consumption and heating costs, ginger is a profitable crop. Finally, ginger is also popular, with an ever-increasing number of customers putting it in their shopping baskets. Offering them a Belgian version and expanding the share of Belgian products on supermarket shelves is an important benefit for Colruyt Group.

There is still a great deal to be learned about ginger cultivation in Belgium, but both the belief and the ambition are there. Ward Steenackers confirms, 'We're working with REO Veiling to see how we can expand cultivation of Belgian ginger and encourage more growers. Today, we're eager to learn more about the varieties that cope well here, how we can automate the harvest and how we can store ginger to allow us to extend the Belgian season. We're also taking the first baby steps with turmeric, with the aim of seeing if it's possible to grow it in Belgium.' 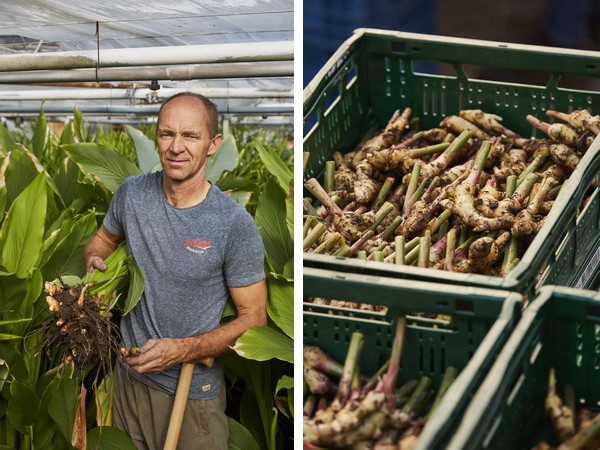