Mushrooms are moving with the times. People are more aware of what they eat and increasingly want healthy, local, sustainable food. Stores are, thus, expanding their mushroom assortments. 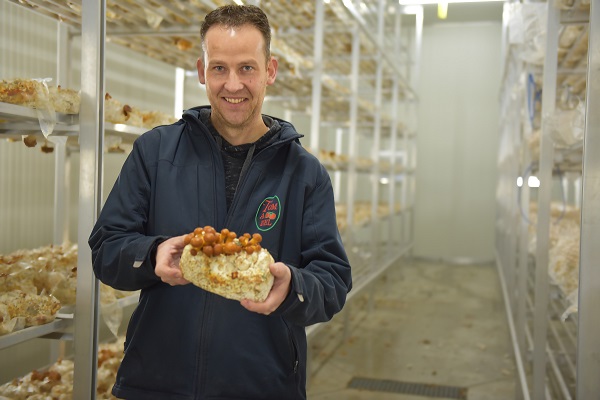 Koert was raised among mushrooms and now cultivates exotic varieties

"Eryngii - King Oyster mushrooms - are rapidly gaining popularity," begins Koert Pleunis of the Dutch company Pleunis Mushrooms. "These were already doing well in countries like Germany and Switzerland and are now increasingly appearing in other European markets, including the Netherlands and Belgium. King Oyster mushrooms are widely used in Asian cuisine and also suit Italian dishes well. Chefs use them, but they're becoming increasingly common in supermarkets too. You can recognize Eryngii by its velvety light gravel-brown cap and large white stem. These sturdy mushrooms with a meaty texture have a good 'bite' and delicious, aniseed/nutty flavor."

Shiitake and Maitake mushrooms are also becoming increasingly popular. "Maitake mushrooms are also firm, even after preparation. These distinctive-tasting mushrooms have many small lamellae or caps that overlap like a heap of leaves. Plus, they're healthy. It is said they, for example, strengthen a person's resistance and immune system, reduce stress, and positively affect cholesterol, blood sugar, and blood pressure levels. You can eat them fresh or as a dietary supplement," says Koert. Beech, Pioppino, Eryngii, Shiitake, and Maitake mushrooms are Pleunis Mushrooms' most commonly cultivated exotic mushroom species.

Raised among the fungi
Koert grew up among the mushrooms. His family started growing mushrooms back in the 1960s. In 2009, Koert and his wife founded their own company: Pleunis Mushrooms, specializing in exotic organic mushrooms. In 2017, they built a new nursery and founded their Belgian branch, Pleunis Biochamp. This company is in the Agropolis business park, an area specially developed for innovative agricultural companies.

Pleunis Biochamp cultivates all its mushrooms for the REO Veiling. Most find their way via that cooperative to Belgian retailers and wholesalers under the Tomabel quality label. "A select group of about ten organic mushroom growers, each with their specialty, market their mushrooms under Tomabel. Tomabel growers take great care to ensure product quality." 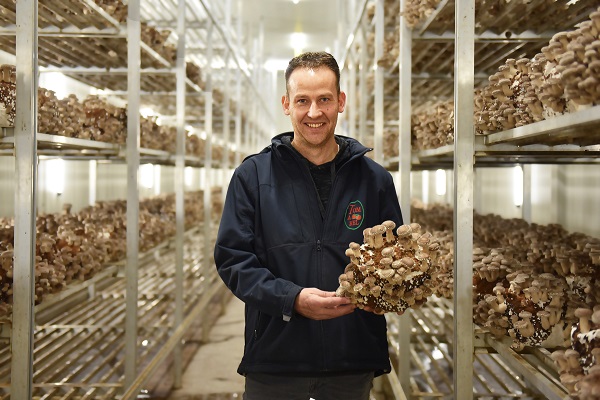 "Besides that, they spend much time and effort on the presentation of their locally grown fruits and vegetables. That shows not only drive and flexibility but also genuine pride and appreciation on their part for the Tomabel quality label. That producer-product connection perhaps typifies Tomabel best, along with the service that guarantees buyers can rely on Tomabel quality. That's what makes Tomabel's products special," Pleunis explains.

Encourage consumption in the summer
Mushroom sales are highest between September and March/April. "During the pandemic, we sold considerable volumes in the summer too. That's not the case now, perhaps because more people went on vacation again this year. Also, consumers have noticeably less to spend, and our mushrooms are more of a luxury item. Still, you can use mushrooms in the summer too. In salads or on the barbecue, for example. That equals plenty of sales and market opportunities." 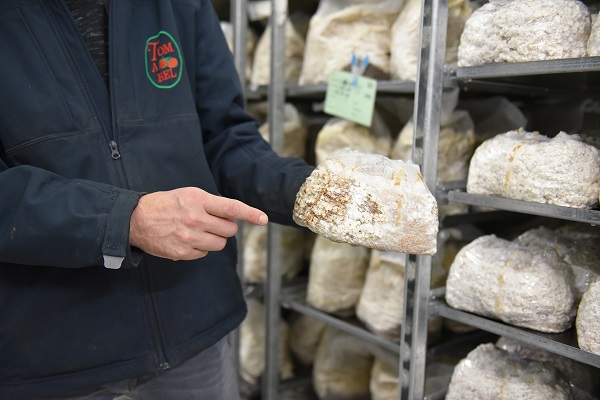 There are certainly other challenges too. It is, for instance, still quite hard to cultivate the lesser-known varieties. "That's still somewhat new, so there's not always enough knowledge available. We, too, of course, have high cultivation costs. For us, cooling is the biggest expense. Still, we're optimistic about the future. The exotic mushroom market is growing, and shoppers are more open to trying new products. Plus, mushrooms are a good alternative for the growing group of people who don't eat meat or eat less of it and want to eat more plant-based foods. And mushrooms' medicinal benefits are also being noticed more often. That all offers good prospects for our exciting industry," Koert concludes.