For the first time in over a year, in August, there were no record prices on the European tomato market. That market, however, rebounded in September. Prices are approaching the past five years' records again. Unfortunately for growers and sellers, inflation records, too, are being smashed, and costs are far higher than in the past five years.

Momentarily ignoring that, across the board, a kilo of tomatoes fetched an average of €1.43 in Europe. That brings the price back to the five-year price record set last year. Lower volumes due to virus problems are one of the reasons for this.

The European Commission's tomato dashboard average price does not tell the whole story. The situation differs per country. France recorded the highest kilogram prices, but Spain and the Netherlands are (far) below. Stats show that, in the Netherlands, a kilogram of tomatoes yielded an average of €0.99 in September.

It is not only the lowest price that draws attention to the Netherlands on the dashboard: this year's traditional post-summer price hike was less severe. On average, over the past five years, the price rose 52% from August to September. This year, that was "only" 40%.

In Belgium - not included in the dashboard - tomato prices rose in early September too. During that month, though, that increase did not continue. The median price for both loose and vine tomatoes stayed around €1.50. Loose tomato prices decreased as October began.

With the import season nearing, many, usually loose, tomatoes from southern European greenhouses will again be heading north. TOVs are more of a Belgian specialty. However, with the energy crisis in full swing, those volumes are expected to be much lower. That could undoubtedly make vine tomatoes more exclusive and expensive. 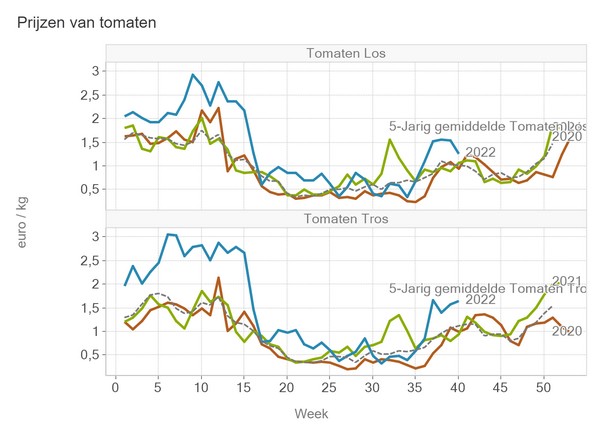 As in the Netherlands, Italy's tomato prices rose 12% less from August to September.

In Spain, the 45% hike was far higher than usual. Across the board, European tomato prices rose an additional 14% compared to the previous five years.

Statistically, high tomato prices are nice. However, besides high costs and inflation records, it seems this year's production is lower. In the summer, it was calculated that tomato production in the European Union would fall nine percent this year. Over the past five years, production was rising, on average, three percent annually.

The culprit for this decrease: less planting due to high energy costs and the long overdue switch by growers to smaller (cherry) tomato varieties. 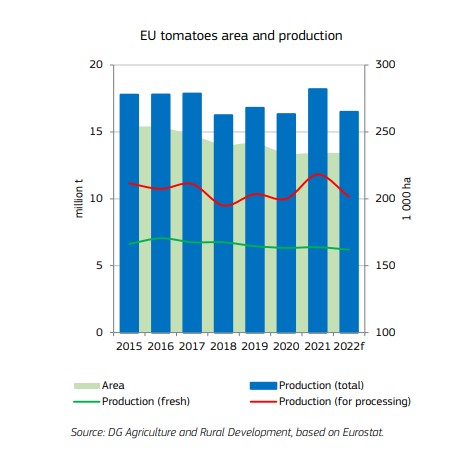 Where production is lower in Europe and certainly where heated and lit winter cultivation is under pressure, growers from countries like Spain, Morocco, and Türkiye see opportunities. From Spain, there are reports that, for the first time in years, the tomato acreage has expanded again. Morocco has recently had more tomatoes yearly, and you can increasingly find Turkish tomatoes in places like German wholesale markets.

Tomato imports from Morocco are on the rise. Click here to enlarge.