Axia Vegetable Seeds' cultivation site at Burgemeester Elsenweg in Naaldwijk has been raised by 1.1 m this year to 6.8 m. We spoke with Frits van Wijk, who is the business manager at Axia. He explains that the site on Burgemeester Elsenweg is now fully set up as a demo site. Previously, the demo was split up; part of it was also at their other location on Monnikenlaan. The height of the greenhouse and the technology at Burgemeester Elsenweg were fine for good breeding. For an illuminated demo space, though, more light was needed. And the greenhouse was a bit too low for that; the lights would hang too close to the heads of the crop. "We naturally thought about whether to rebuild. But because all the existing technology in the greenhouse is fine, we didn't opt for that." 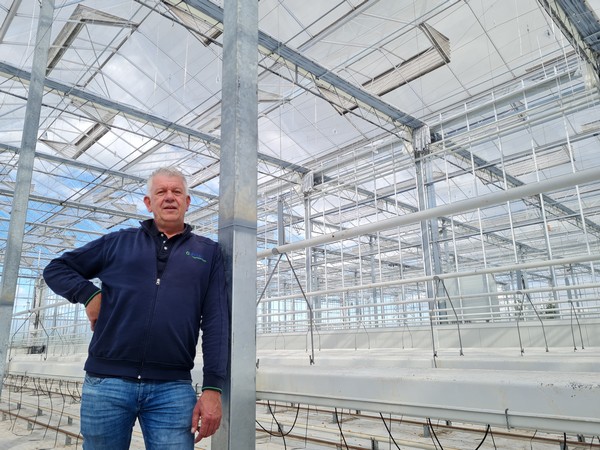 The total area here on Burgemeester Elsenweg is 17,500 m2. Of which some 7,000 m2 has been raised. The total area was raised in one go, in increments of 5 centimeters. "It remains special to see when a greenhouse is raised. During the raising, the roof is angled for a moment. This is a fantastic invention by T.C. vd Dool bv, no window breaks! In five weeks, T.C. vd Dool's crews were ready. The first shift is raising the greenhouse. And the second shift is finishing it off neatly: fixing crop arches, putting purlins back in, putting doors back in, etc.)."

The work went according to schedule. They ended up being a little more spacious in "the jacket" because, during this greenhouse modification, it was decided not to turn on the lights this winter due to high electricity prices. Nevertheless, all plans and preparations do continue. The lights, it is expected, will come on next year. Meanwhile, the electricity and heating are connected, and the final touches are being made to the screen installation. Cleaning and disinfecting the greenhouse can soon begin. The first planting material will be set in mid-December.

The demo greenhouse on Burgemeester Elsenweg will present tomatoes in the coarse, medium, and specialties segments. Another section will be the new material plus material coming from the V0 greenhouse. That V0 material was selected by breeders and salespeople to continue the breeding process.