Since the end of September, the average price for vine tomatoes has been higher than that for loose tomatoes. Last week, the price started to diverge further on the VBT clocks. A kilo of vine tomatoes yielded almost 40 euro cents more on average last week. The cucumber price is falling, and the high aubergine and green courgette prices were knocked down as well.

Traditionally, more loose tomatoes come from importing countries, and growers here grow vine tomatoes. This winter, however, they will not be able to do so as much. That could make vine tomatoes more exclusive and, thus, potentially more expensive. Since week 37, volumes have been lower for vine tomatoes compared to last year. Compared to 2020, the numbers are even further behind, according to the data behind the chart above shared by the Flemish Ministry of Agriculture & Fisheries. 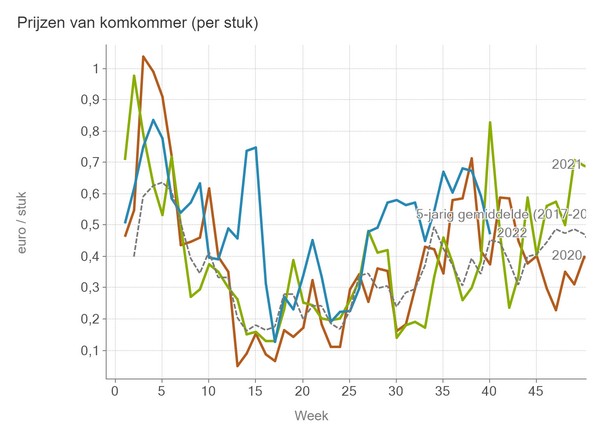 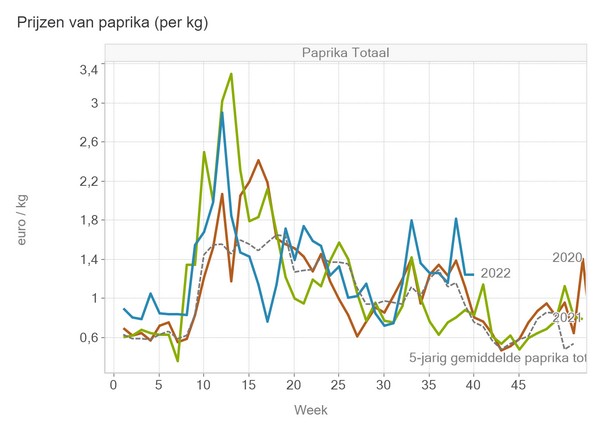 Pepper prices saw a peak in mid-September. That peak has since been wiped out, but the price remains above the five-year average. On the VBT clocks, a kilo of yellow peppers yielded the most in week 40 at over 1.56 euros, followed by green (1.34) and red (1.03).

The high aubergine price dropped last week. A kilo of aubergines went for an average of 1.42 euros. In previous weeks, prices were still well above 2 euros. The same applies to green courgettes. The unit price was above 1 euro for some time, but last week it was just under 69 euro cents.

A look at the soft fruit prices for week 40 shows that the middle price for strawberries dropped considerably to just over 4 euros. A kilo of blackberries made over 10.5 euros, and raspberries reached 7.5 euros.

The above charts come from the Flemish Department of Agriculture and Fisheries' agriculture figures page. View all VBT figures for week 40 for fruit and vegetables here.