It should come as no surprise that when you ask growers about their confidence in the near future, they are not terribly positive at the moment. The results in this autumn's new Flemish agricultural economic index show that. The index for vegetables outdoors and in greenhouses and ornamental horticulture under glass has not scored this low since the surveys began in 2007. Cost increases, energy supplies and falling consumer confidence are leading to a negative mood in horticulture. 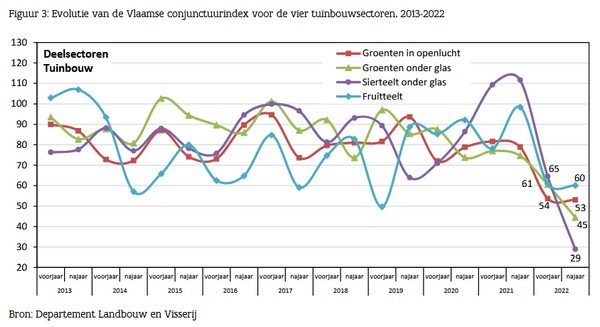 Greenhouse vegetables
The economic index of vegetables under glass drops from 61 to 45, a new low. Both the past period (55) and the next six months (34) are rated very poorly.

It is clear that rising energy prices are affecting growers. In a normal year, a third of total costs are attributable to energy costs. Since 2021, the European gas price has increased tenfold. Moreover, the federal government is working on a gas cut-off plan in case gas supply falters. In doing so, it is following the example of other European countries, such as Germany, who are seriously considering this option. As a major user, the greenhouse sector also comes into the picture in this regard. The Russian invasion of Ukraine and the natural gas supplies mean it will be a challenging winter. Possibly some growers will plant later or even leave the greenhouse empty.

41% of ornamental growers surveyed think the price of produce will increase in the next six months. 37% think the price will not change, and 22% expect a slight price decrease.

The challenges experienced by greenhouse vegetable growers are largely the same for ornamental growers: high energy costs and uncertainty about the geopolitical situation. In ornamental horticulture, rising inflation plays a major role. Consumers are less likely to buy ornamental horticulture products in uncertain times. Moreover, many consumers have already made the necessary investments in these types of products during the COVID pandemic, making the time before a second purchase longer.

91% of entrepreneurs report issues in these difficult times. Financial problems are most commonly reported in the pig sector (66% vs 73% this spring), vegetables under glass (32% vs 7%) and ornamentals under glass (30% vs 34%). Among greenhouse vegetable growers, most growers also point the finger at the government: 61% of growers do so. 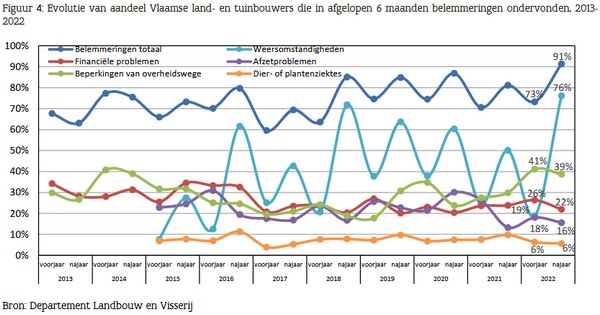