A meeting held by the table tomato Contact Group during Fruit Attraction 2022 discussed the 2021/22 campaign, expectations for the next one, the relationships between competitors, and phytosanitary issues concerning table tomatoes.

After supplying a summary of the positions of France, Spain, and Portugal, expert Massimo Pavan provided the Italian point of view within the European context.

The 2020/21 campaign
"In the summer of 2021, we almost reached 50°C, which partly compromised the summer production, causing low yields and quality problems, especially in southern Italy. There were also viruses and Tuta absoluta. Quality was better in northern Italy, thanks to a cooler climate. Although prices during the summer season of 2021 were high on average (€1.50-1.0/kg for cherry tomatoes), they barely covered production costs. We know Belgium, the Netherlands, and Germany also had production problems due to the cold temperatures in spring and the known ToBRFV problems."

"Tomato prices remained high throughout the winter 2021 and spring 2022 season, also due to the low yields in winter caused by the cold temperatures of December, January, and February until March, especially in Sicily - a region that produces 90% of Italian tomatoes. For over 50 days, night temperatures were below or close to 0°C. An additional element that maintained the domestic market lively was the lack of Dutch produce. In fact, due to the higher gas costs, transplants were delayed by a couple of months in the Netherlands precisely to avoid having to heat and light up greenhouses, thus postponing harvesting. The market slowed down in June with the arrival of produce from the Netherlands and Belgium."

"The consumption of fresh produce in Italy between January 2022 and June 2022 dropped by 14%, and by 9% when it comes specifically to tomatoes. We believe this was due to a perception of crisis caused by the war in Ukraine and the hike in energy costs. Luckily this drop in demand did not affect prices since production was much lower than in previous years. The market recovered from mid-August, and we now reach €2.30-2.50/kg for cherry tomatoes."

Expectations for the 2022/23 campaign
"We believe produce will lack until late October, as transplants were delayed due to the excessive heat in Italy. The market situation should normalize around mid-November as quantities will increase. The areas destined for tomato cultivation are substantially the same as last year, with harvesting to be carried out between November and mid-April 2023. We expect summer productions to keep dropping both to avoid competing with other areas and due to the difficulties caused by climate change."

Competition from the EU and the UK
"I have to say, this year, we were not as affected by competition from the EU, as volumes were barely enough to supply the domestic market, and there was no substantial surplus to be destined abroad. When we did export, it must be said prices were much lower than on the Italian market. Based on the elements and data in our possession, we have noticed the volumes of imports from Morocco to EU countries have diminished, though the exports towards the UK have increased." 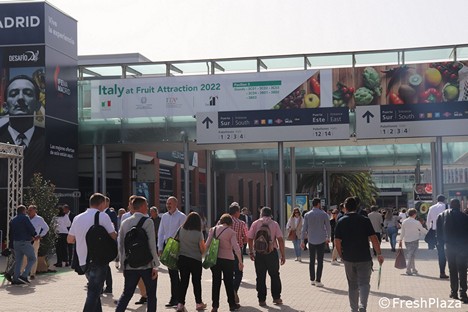 The phytosanitary question
"The main production problems are mainly due to Tuta absoluta and the Tobamo virus. We have had fewer Tuta attacks this year, as the high temperatures hindered its development, so we managed to contain the problem. As for the ToBRFV, we know we have to live with it, though it was very aggressive in 2021 and hit all productions, causing a drop in yields of around 50% for small tomatoes (cherry and plum) and up to 70% for round tomatoes, coupled with a steep increase in production costs (plastic +25%, fertilizers +36%, pesticides +10%). In addition, this summer Tomato Brown affected production in northern Italy as well, so we can see how no area is safe from it. I would like to stress that these problems (i.e., Tuta absoluta, Tomato brown, and issues caused by climate change) are making producing tomatoes extremely expensive, as yields are increasingly low and the cost of raw materials, packaging, energy, transport, etc. are seeing steep increases. Unless substantial changes are made, this will lead to a further decrease in production."

"This is why we criticize the new EU proposal to halve the use of pesticides in agriculture. We believe that the objectives of environmental sustainability and food safety must be achieved gradually and in a way that is achievable for Mediterranean agriculture without weighing heavily on the production chain and putting food supplies at risk."