The diamondback moth (DBM), Plutella xylostella, is a small plutellid moth of European origin that has been in North America for nearly two centuries. It is currently present in many parts of the world, feeding exclusively on cruciferous hosts such as broccoli, cabbage, and cauliflower. DBM has multiple generations per year and can cause significant yield losses when populations are not controlled. Increasing temperatures that shorten pest life cycle, changing climatic patterns and milder winters in many areas, the ability of adult DBM to disperse, and the presence of cultivated and wild cruciferous crops year-round are worsening the pest problem and require the continuous application of pesticides and other control options.

Insecticide resistance is also a common problem in DBM, where very high levels of resistance to some commonly used pesticides in field populations were reported. Although DBM infestations are common in cruciferous vegetable production, many parts of California and Arizona have seen a significant increase in DBM populations in the past few months. Year-round production of cruciferous vegetables supports DBM populations with as many as 12 generations per year and requires regular application of pesticides. Frequent pesticide applications can lead to insecticide resistance, ineffective pest suppression, and higher yield losses. A good integrated pest management (IPM) strategy is critical to address a pest like DBM. 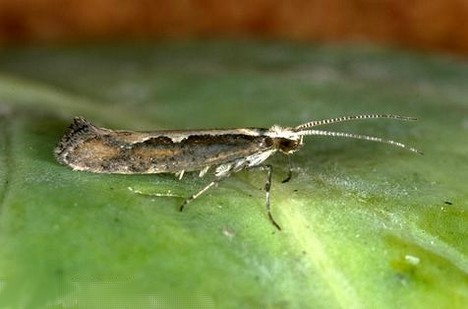 Biology
A female moth deposits an average of 150 eggs over about ten days (Capinera, 2018). Eggs are deposited in small batches in depressions on leaf surfaces. Small, green larvae actively feed on the foliage, first instars in mines and the remaining three on the surface. Pupation usually occurs on the lower side of the leaf surface in a loosely spun cocoon. Adult moths are slender and greyish brown with conspicuous antennae. The light-colored diamond pattern on the wings when the moth is resting gives the name diamondback moth.

Damage
Larval feeding on foliage and growing parts of young plants causes the skeletonization of leaves. Larvae can also bore into the heads and flower buds, resulting in the failure of head formation and stunting of plant growth. Uncontrolled populations cause significant yield losses.

A sound IPM strategy involves regular monitoring of pest infestations, a good understanding of the pest life cycle, and using multiple tactics that target one or more life stages (Dara, 2019). The following recommendations are developed based on the new IPM model and its different components.

Pest management
Some pests can be effectively controlled by one or two tactics, but a difficult pest like DBM, with its increasing threat, needs a variety of tactics to achieve maximum control.