"Feelings can't be expressed in numbers or algorithms, so our work remains human work"

Consultancy firm Vortus is celebrating its 40th anniversary this year. The official celebration was held recently and included the presentation of an anniversary magazine. One of the stories it contained is about Barend Löbker, who has been the company's owner and director since 2007. The first part of the story already appeared online this year. In the second part, Barend discusses how Vortus looks at innovations, collaborations with other companies, and how consultancy is people work. 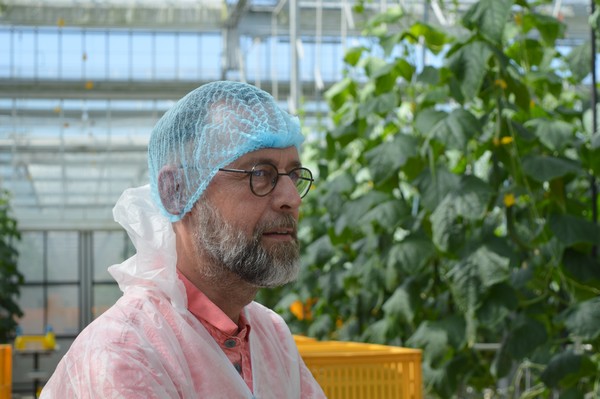 Innovations and new technology have to work in the grower's favor, according to Barend. "That takes time, and sometimes it turns out that something new isn't necessarily better." Barend mentions 'Het Nieuwe Telen,' an initiative in the Netherlands that uses new insights to improve cultivation, as an example. "It's not about technology, but a new way of growing. There are many useful elements within the concept, but I don't think growers should have to do everything differently all at once." He cites the work of his father, who currently has a job in the Westlands Museum. "The greenhouses in the museum still rely on the same principles as the much taller and more modern greenhouses currently in use. You put plants inside, and they have to yield the best results possible. Over the years, we've started to look at things more from the plant's perspective."

Those who don't know better might think that Vortus is a bit conservative, but Barend says that nothing is further from the truth. "I wouldn't call it that. We do embrace new technology, and innovation is a good thing. In fact, it's essential. Twenty years ago, screens were a rarity, but now you sometimes see three in a single greenhouse. However, the basic principle remains the same; the plant has to grow well, and greenhouse crop yields have to be optimal. That was the situation when Vortus started all those years ago, and it was the situation preceding it. Maybe we're just a bit more cautious when it comes to innovation."

Advice for everyone
On the subject of innovation and renewal, a partnership with greenhouse builder Kubo stands out. This partnership has been ongoing since 2014 and was extended in 2019 with a handshake at the international horticultural trade fair GreenTech in Amsterdam. Vortus advises growers who invest in one of Kubo's new, semi-closed Ultra Clima greenhouses. "It's in everyone's interest that things go smoothly in a new installation. That's how our partnership, in which we retain our independence, should be seen. We've frequently come across all kinds of situations where we could link our advice to products, but that's something we deliberately avoid."

Barend cites an example from Vortus' customer base. "We advise both plant breeders and growers. There's a commercial relationship between them since the grower buys plants from the plant breeder. As you'd expect, plant breeders have sometimes asked us to recommend their plants to growers. We never do. We want to work alongside the grower and plant breeder to make the best possible product, but we work for multiple plant breeders. For this reason, if we get such a request from a plant breeder, we always advise growers to consider the plants of several plant breeders. At the end of the day, the grower decides. It has always been, and will continue to be, a personal choice which we don't want to influence."

Maintaining emotional distance
According to Barend, Vortus has its own vision of horticultural development and attracts customers who share that vision. "Our profession is personal. We have to click with our customers, with the growers. The grower looks for a consultant they trust and get along with, and we do that too, perhaps without even realizing it. There is occasionally friction, of course. You have to be able to keep each other on your toes and not just tell someone what they want to hear. But you also have to maintain some distance as a consultant because otherwise, there's a danger that you'll get swept up in the grower's emotions."

These kinds of emotions come to the forefront when problems arise in cultivation. For example, everyone understands that a virus in a crop is very distressing, and the consultant is also affected. "One of our consultants once said that a customer's problems kept him awake at night. In itself, this is excellent since it reveals a deep personal involvement. However, it's not good for a consultant to lose sleep over such things. At times like these, it's nice to work as a consultant in a team where you can talk about problems. That's another lesson learned from Henk and Simon. In a group, a solution that nobody has thought of can come from an unexpected source via a colleague."

A consultant can't keep things locked up in their head
It's rewarding for consultants to come across different challenges in each greenhouse together with the grower. "Finding solutions is satisfying. In these times of increasing competition, a customer sometimes asks a consultant not to share company secrets outside the greenhouse. It's nothing new. Twenty years ago, I was given an NDA to sign, a declaration of exclusivity. That doesn't work in our profession. You can't lock up ideas in your head. Our job is to see a lot, draw general lessons from what we see, and apply those lessons elsewhere in everyone's interest. Keeping a balance is important, of course. Sometimes, you come across things that are too personal. In these cases, 'what happens in Vegas stays in Vegas.'"

The 40th anniversary of Vortus and the growth that the company has continued to experience since its foundation is evidence enough that paid consultancy work has earned its right to exist. But what about the future? Barend has noticed that the number of companies providing advice has increased in recent years, which he calls a 'positive development.' "Sales representatives are describing themselves as 'consultants' more and more on their business cards. That's fine, especially internationally, where suppliers are also reacting to growth in the horticultural sector, and there's a big demand for expertise. Consultants play an important role here. We in the horticultural sector as a whole often work together nationally and internationally, with everyone doing their bit for a project. That requires independent advice. That's how we came into existence, and that's how we will continue to exist."

Human work
According to Barend, all kinds of advances underway in horticulture, such as autonomous cultivation, robotics, or the involvement of investors, continue to require advice and guidance. He's not worried that the rapid inroads being made by new technology will mean people, including the consultant, disappear from the greenhouse. "My granddad did everything by hand, my dad witnessed the introduction of climate computers, and now the technology for autonomous cultivation is advancing really rapidly. We're keeping a close eye on these trends and regularly discuss them with specialists. Putting the technology to one side for a moment, what we're ultimately interested in is what the grower thinks. They're the ones who have to work with this technology in practice."

By no means do all the innovations presented make it into practice. "That also used to be the case with technology trial at testing stations, which is why I don't think that our work is suddenly going to be digitized. It's great, of course, that growers can now use new systems to control multiple greenhouses at the same time from a single location. We also use modern technology in our work and can now control certain aspects remotely. We can also contact customers via video conferencing. In my opinion, however, people often have a natural tendency to hide the very worst. That means the least attractive corner of the greenhouse isn't visible during a video call, yet this is the area that could profit most from some attention. Fortunately, growers are still happy to see us turn up, and that isn't something that's going to change anytime soon. Feelings can't be expressed in numbers or algorithms. Our work remains human work."