Once you know what a dragon fruit looks like, you will never forget it. The bright red, sometimes yellow or purple, scaly skin makes for a dramatic appearance. One that will surely leave an impression. The flesh ranges from white to deep pink, and the flavor is often described as having hints of kiwi, watermelon, or pear.

Since 2007, the Pitahaya/Dragon Fruit Production Tour has united dragon fruit growers of all levels and backgrounds. After a two-year hiatus due to the pandemic, registration for the 2022 tour filled up in less than 24 hours.

A group of 60 participants gathered on September 8 at the Wallace Ranch Dragon Fruit Farm in Bonsall to learn the latest research on growing the drought-tolerant specialty crop. Ramiro Lobo, a small farms and agricultural economics advisor for UC Cooperative Extension in San Diego County, introduced dragon fruit growers and other UC scientists. 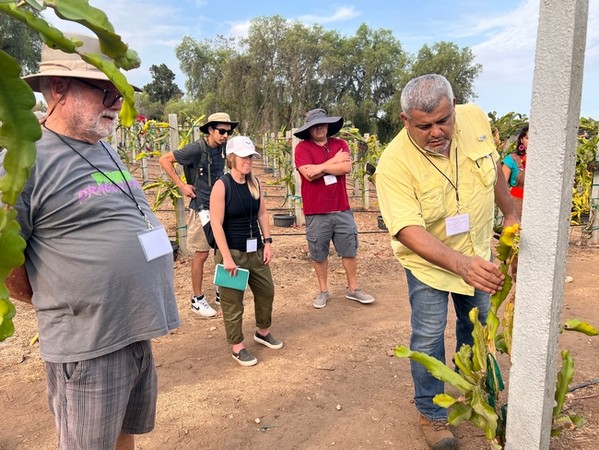 At Wallace Ranch in Bonsall, Ramiro Lobo (right) demonstrates how to control pitahaya/dragon fruit leaves as they grow. All photos by Saoimanu Sope.

"I can't remember a year where this event was not sold out. So, the need and demand is there," said Eyal Givon, a long-time participant and dragon fruit grower.

The tour not only demonstrates how to grow the fruit but it also grants participants access to plant material for varieties that are unavailable elsewhere. "We have given out about 50,000 cuttings through our festival, and some varieties were unique to us because we introduced them to the U.S.," said Lobo.

During their time at Wallace Ranch, participants heard from the farm's owner, Neva Day, regarding the growing practices that have shaped her success today. Day has been growing organic dragon fruit since 2013 and has well over 5,000 plants on the ground and more than 20 varieties. 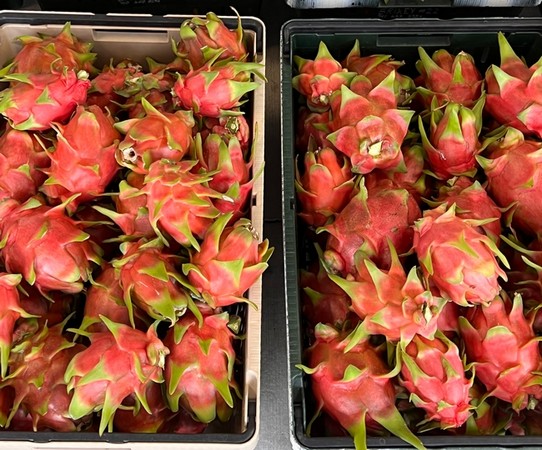 According to Middleton, Pecan Sandies are a balanced source of fat, protein, and sugar, making them excellent bait for the sugar-loving insects.

Participants eventually made their way to Dragon Delights Farm, located in Ramona. Kevin Brixey, the farm's owner, has been growing organic dragon fruit for six years.

Although Brixey was hosting this year's tour participants, he used to be one of them.

"I attended the Pitahaya Festival in 2014, and that's where I realized dragon fruit was something I could grow. There was a lot of good information being shared and a connection to other growers, so it was a major stepping stone for me," he says.

Unlike traditional dragon fruit growers, Brixey uses shade to grow his dragon fruit after learning about the method from another grower.

"I was impressed. I liked how the fruit performed under shade, and now I use it as a management tool," Brixey explained. In Inland Valleys, shade can shield fruit from intense sunlight and protect them from unwanted guests that eat the fruit, such as birds. 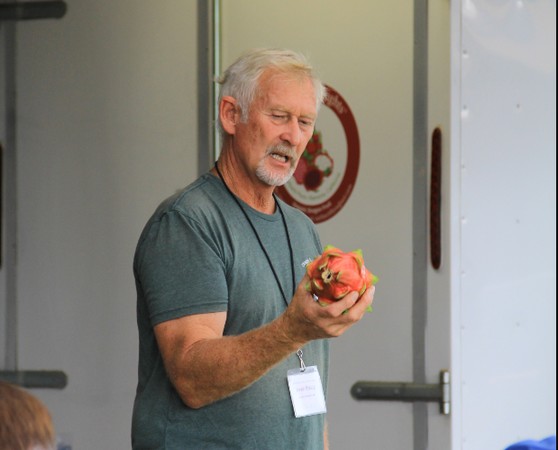 Kevin Brixey, owner of Dragon Delights Farm, shares his experience as a grower.

At the Farm Bureau of San Diego County offices, participants learned about the history of dragon fruit growing in California, food safety, pest management, best production practices, and much more.

When reflecting on his time participating in the production tour, Givon, who has been growing dragon fruit for about 20 years and manages a 20-acre farm in Moorpark, said he enjoys reconnecting with other growers the most.

Lobo agreed with Givon and added, "I hope that these tours become self-sustained and that we go back to a research field day at Southcoast REC with regional tours in San Diego and Ventura as we did before, or any other counties." 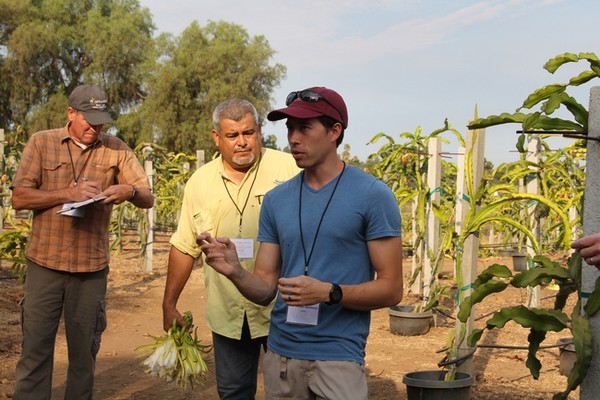 While at Wallace Ranch, Eric Middleton (center) explains how to effectively manage pests that are common to pitahaya/dragon fruits.