With a number of adjustments, strawberries can be grown year-round with the lowest possible use of fossil fuels and chemical crop protection products. This is the conclusion of a study by the Business Unit Greenhouse Horticulture and Flower Bulbs of Wageningen University & Research. More than three years of research was carried out in the Demokas 2030 into the application of LED light, dehumidification, and three screens, among other things. This made it possible to achieve high, almost year-round production. 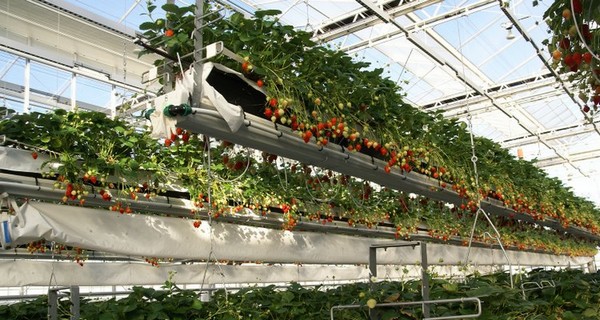 In strawberry cultivation with a harvest in the autumn and spring, normally, more than 15 m3 of gas is used per year. This ensures the production of a maximum of 15 kilograms per m2. In the Demo greenhouse 2030, WUR investigated whether it is possible to grow strawberries almost fossil-free and without emissions, with good production. To this end, the greenhouse was set up differently than 'traditional' greenhouses.

The first step was proper insulation: this was done with three screens. To avoid high humidity, it was possible to dehumidify via hose pipes with a heat pump and a heat/cold block, whereby the sensible and latent heat from the moist air was recovered. The heat from the LED lamps could also be used in the greenhouse. If necessary, fossil-free generated heat was supplied via the pipe rail system. Using hoistable gutters with a mutual distance of 80 cm improved the light utilization of the sunlight and lamp light. 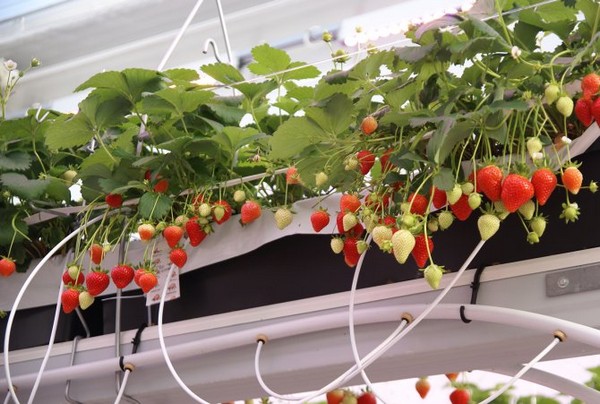 Year-round yield
The ever-bearing Favori variety, which is less sensitive to mildew and has a good taste, has been used in all crops. It even turned out to be possible to harvest the same plants for almost a year. This has resulted in the production of more than 25 kilograms per m2. In the 2020-2021 season, gas consumption for the pipe rail was only 1 m3 per m2. Of course, (fossil-free) electrical energy was used for the LEDs and heat pump. During the three-year study, CO2 consumption has halved from 17.5 to 9 kilograms per m2 per year. In the past season, relatively few pesticides had to be used against mildew, and they were only residue-free agents. Aphids proved difficult to combat completely biologically: chemical interventions had to be taken a number of times. The drain water was always 100% recycled.

The research with strawberries in the Demokas 2030 has now been stopped. The demo test, therefore, shows that it is quite possible to grow strawberries using as few chemical crop protection agents and fossil gas as possible. A good variety that has a high mildew tolerance, among other things, remains very important.