"With the limitations we had, we are still heading for a very good production"

At Kwekerij de Kreek in 's-Gravendeel, they are now over halfway through a third round of their traditional cucumber cultivation. Or well, 'traditional,' in a special season it took quite a bit of creativity to achieve a good crop.

This season, the growers started five weeks later. "Normally, we start in early January, but this year we only started mid-February," explains farm manager Wim de Kreek. On over 1.6 hectares, he grows cucumbers, and for home sales, he also grows a few tomatoes and peppers. The grower uses a boiler to heat the greenhouse. "We don't have a contract, so this year we started heating very economically with the gas we had to buy at the day market," he says.

Once it started, Wim was pleased with how well the crop took off. "By mid-February, there is already much more solar heat than when we normally start in January. It went easier than expected." 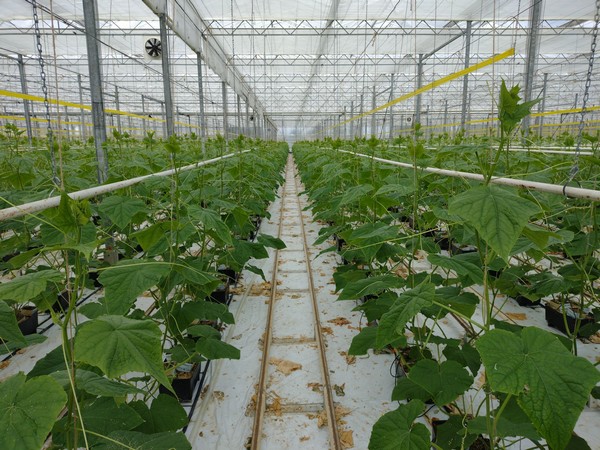 The start of the third crop, in early August

Room temperature
It was also nice and sunny later in the spring. "That really helped. We still managed to achieve good 24-hour temperatures thanks to the sun. The night temperatures were lower though, about two degrees less compared to what we are used to because we heated less. During the day, we caught up with the help of the sun. As a result, we still ended up with 24-hour temperatures of between 20 and 21 degrees Celsius, except for a few dark days when we were below 20 degrees."

Energy screen replaced
A new energy screen was installed in part of the greenhouse last winter. "The old energy screen was worn out and needed to be replaced. An extra-clear cloth replaced it. We left this cloth closed more and only opened it when the solar heat came in. That way, we tried to make the best use of the sun."

Challenge in hot summer
The summer was also sunny and hot. Wim laughs. "That's precisely when the sun became a challenge again. We could then only open the vents for cooling and close the screen. The advantage was that this summer, we could really leave the boiler off. We normally still put it in a small tube in the morning in summer. Not this year. As a result, we did suffer from mildew, despite using a resistant variety. Fortunately, with some corrective treatments, we got it under control."

Liquid CO2
For a period in the summer, the boiler did not even run at all. As a result, the growers did not generate their own CO2. In a Facebook post written by Wim - "in which we show people who follow us something of how the process goes before a cucumber lights up in the shop" - he already explained the importance of the boiler, which generates heat and CO2 for the grower. "Because we heat economically, we looked for an alternative to CO2 from the boiler. After a phone call to the supplier of liquid CO2, it turned out that they still had a small tank for us. On a rental basis, we have had that tank next to the greenhouse since mid-July." 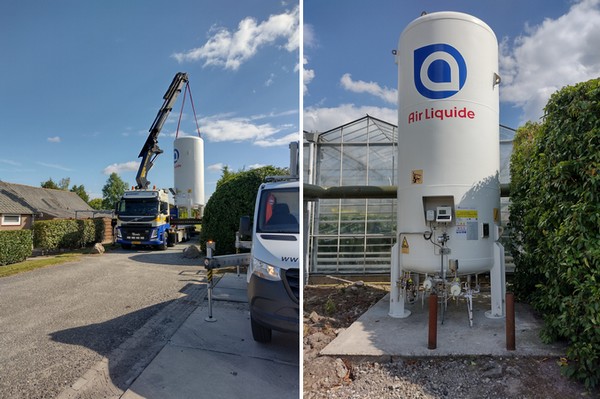 Installation of the tank for liquid CO2, mid-July 2022

Had that option not been there, it would not have been a reason for the grower not to grow. "There's always CO2 in the air. In the summer, there's always CO2 coming in through the vents, but without extra injection, you don't achieve the optimal values for optimal production for whole periods. You can also grow without injection of extra CO2, but then you do sacrifice production."

Production still good
With a later start to cultivation, this is also the case for Kwekerij de Kreek this year. "We are 2-5 units per square meter behind compared to other years and are heading towards 170 units per square meter. Normally we get around 180. However, when you consider that we started five weeks later, I still think it is a very good production."

The start of the second part of the third crop, in mid-August

Wim, who runs the farm together with his parents, hopes to continue cultivation deep into October. "The first part of the third crop round was planted at the end of July, part 2 on 10 August. There is still a vital crop now. We want to continue this year until it really can't go on any longer. The nights have been quite cold for the past few days. So we have been heating a little. If the days get even shorter soon, we won't get enough light and heat to continue any longer."

New insights
Wim also plans to continue the pepper crop, some 20 plants, until then. In the tomato plants, the head is out, and they are currently harvesting the last fruits. Wim does not yet know when cultivation will start next year. "We hope for clarity from The Hague soon. We need help to reduce energy costs." The new insights from this season on how he can still grow good quality cucumbers without using too much natural gas will carry over to next year.