Six years ago, there was a 300-acre parcel of wooded land in North Stonington. A dirt road led into the property, and Jeremy Whipple, executive director of the Mashantucket Pequot Tribal Nation (MPTN) Department of Agriculture, had a dream of building a farm for the tribe on the land and reconnecting to their agricultural roots.

That parcel of land has transformed into Meechooôk Farm, a vibrant agricultural operation for the tribe. Today, there are two parcels of land that total 600 acres. Now the land is used for production, with greenhouses growing hydroponic lettuce and tomatoes year-round, fruit plantings, livestock, and plans to further expand the farm and the agricultural products they can grow.

The transformation of the land was made possible through support from UConn Extension educators and the Federally Recognized Tribes Extension Program (FRTEP). 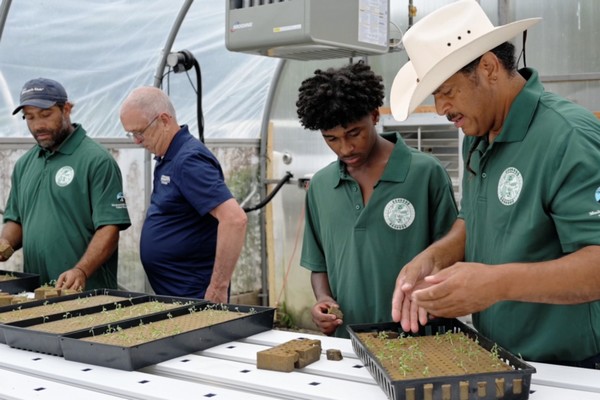 The program is funded by the U.S. Department of Agriculture’s National Institute of Food and Agriculture. The USDA recently funded the project for an additional four years thanks to the success of Meechooôk Farm and other programs that strengthen the tribal community, their land base, and self-sufficiency.

“It’s brought back a lot of traditions that were lost,” says Whipple. “This project means everything to me because we’re growing food for our people and training families to grow their own food.”

While the tribe’s agricultural activities are having immediate impacts on the community, the goal is also to support future members.

“It’s important because it’s part of our culture,” Whipple says. “Teaching the principles of the Seven Generations, that’s what we’re doing it for. The Seven Generations is a mindset the tribe has where every decision is considered based on how it will impact the next seven generations.

Embracing their agricultural roots and adapting practices for the future allows the Mashantucket Pequot Tribal Nation and UConn Extension, which is the outreach arm of UConn’s College of Agriculture, Health and Natural Resources, to address critical issues surrounding food and agriculture sustainability, health, and well-being, and climate resilience. 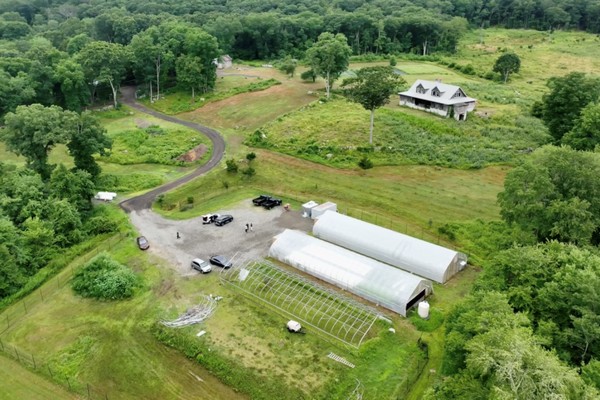 Meechooôk Farm is located in North Stonington, Connecticut. Expansion of the agricultural enterprise is ongoing as part of the partnership between the Mashantucket Pequot Tribal Nation and UConn Extension. (Remsberg Inc.)

“Our partnership with the Mashantucket Pequot Tribal Nation goes to the core of who we are,” says Indrajeet Chaubey, dean of the College of Agriculture, Health and Natural Resources. “We’re committed to this partnership both as part of our land-grant mission and our dedication to diversity, equity, inclusion, and justice.”

The history of the Mashantucket Pequot tribe traces back 10,000 years in southeastern Connecticut, and many of those years were spent fighting to keep their land.

“As tribal people, we have an obligation to the next seven generations, and what better gift to leave than clean water and food,” says Daniel Menihan, Jr., a tribal councilor. “It’s getting right back to our roots from a cultural and historical standpoint. But when it comes to agriculture, it’s really the tribe just repositioning ourselves as we always have been.”

“We have a Food Rx program that diabetics in the tribe are able to purchase produce from the farm as a prescription, like going to the pharmacy.”

As part of the FRTEP program, UConn Extension educators who specialize in nutrition have provided virtual cooking and nutrition classes. Youth members also have the opportunity to participate in fitness classes and are actively involved with agricultural production on the farm.

Meechooôk Farm has progressively evolved through the dedication of the tribal members, as well as the vision that Whipple has shared with everyone. Progressive improvements have included selling their products to restaurants at Foxwoods Casino and through a farm stand.

Goals
“The long-term goal is to increase the institutional capacity of Mashantucket Pequot Tribal Nation to meet their own food production needs,” explains Shuresh Ghimire, assistant extension educator and principal investigator on the project. “Tribal food security, food sovereignty, youth engagement, and health of the tribal members are among the top priorities for the tribal nation, and those goals align very well with the FRTEP program goals.”

Further land clearing and expansion of the agricultural enterprise is underway. The tribe is building more greenhouses, a meat processing facility, as well as a winery, and a commercial kitchen to expand sales beyond fruit and vegetables. They plan to partner with other local farmers and share their resources with the goal of helping other agricultural producers in Connecticut to increase food security in the state.

“UConn Extension has been great partners and great friends,” says Menihan. “The relationship is a cornerstone to what we have here today; it’s a two-way relationship. We’ve had very young tribal members extremely inspired by what’s happening here, and that’s probably the most rewarding – the team’s ability to have built up the interest and inspire the next generation that will carry this forward.”