New robot to lower a plant every 10 to 20 seconds

It is hot in the greenhouse at tomato grower Vermarke in Sint-Katelijne-Waver in early June. But one 'special employee' is not troubled by this. They are a robot that lowers the tomato plants. To do so, the robot turns the hooks around. "What is special is that the robot does this without being attached to the wire," Dimitri Verbruggen demonstrates. He is a manager at robot developer Veditec and points at what to the layman is 'a simple piece of metal'. "We have applied for a patent for this special gripper." 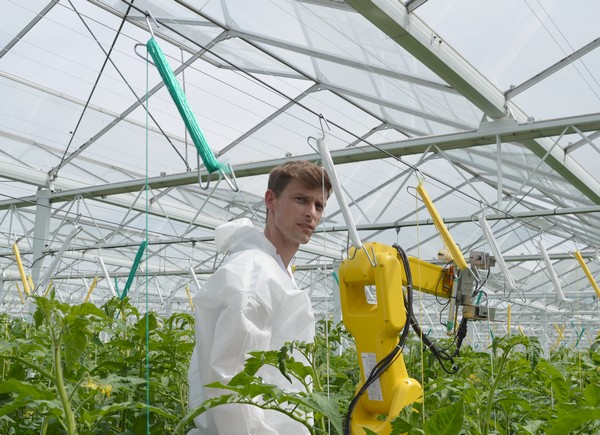 Dimitri Verbruggen with the robot in the greenhouse at Vermarke

The simpler, the harder
The development of the robot started two and a half years ago. "Grower Kevin Schietecatte knew that I was active in robotics," says Dimitri, who, as a horticulturalist's son, started developing palletizing robots in 2016. "Now we have several such robots running and also made the step into the greenhouse. First in lettuce, but Kevin wondered whether it was possible to lower tomato plants with a robot. That's when we started this journey in the early 2020s."

What followed was a period of brainstorming and 3D drawing. One challenge proved to be getting the robot to position itself properly in the greenhouse. "For this, we first looked into vision technology, but this turned out not to be optimal. A low-hanging sun could seriously confuse the robot."

It was then decided to add a localization pole. This helps the robot to find its way while 'walking' over the wire on which the hooks with horticultural yarn hang. It was only recently that the pole was abandoned. "Our aim is to make a simple, reliable system that is easy to use for the end-user. That is exactly what makes it a challenge for us. You could say that the simpler the robot, the harder it is. Taking down the pole is, therefore, easier said than done." 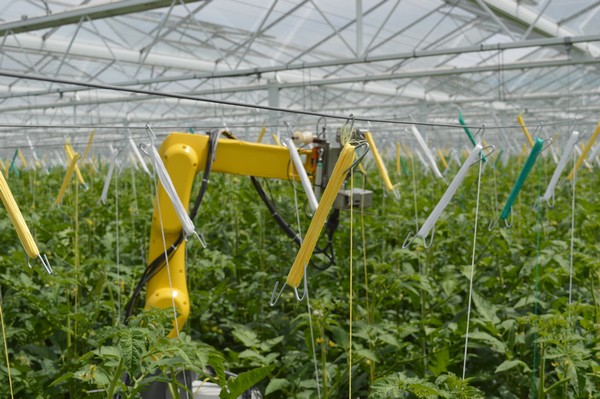 "It is good if the robot lowers a plant between 10 and 20 seconds," says Dimitri, who has already thought about the grower's business case. "It is important to look at more than just the labor cost savings in doing so."

Partners sought
After the robot entered the greenhouse for the first time in 2020, a lot of people came to take a look. Until now, Veditec had not gone public with the robot. The reason? Fierce competition in the market, in which all sides are working on robotics to help growers in their operational management. "You want to show what you are doing, but you do not want to show everything. Nevertheless, we choose to present the robot now. We really want to make progress with the robot and are therefore looking for partners to take technical and commercial steps. It helps if people know what we are doing here."

As far as Dimitri knows, few robots are active in crop care, let alone in lowering tomato plants that easily weigh eight to ten kilos. "We, therefore, see an opportunity to enter the robotics market by automating a task that is not yet so simple. Lowering plants is quite heavy work."

The robotic arm makes 40,000 movements per hour without touching the wire when lowering the plants. "This allows the robot, if necessary, to turn the hook several times and lower the plant further." Dimitri compares the robot at Vermarke with a lawnmower for convenience to indicate how he sees the future. "Just like robotic lawnmowers drive around people's gardens, that's how I view it with this robot. People can also mow the lawn, but if the robot does it, and does it well, then they don't have to worry about it anymore." 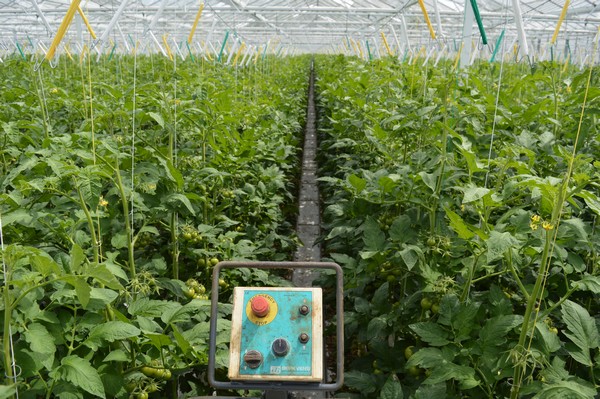 What will help all robots, in the long run, is when tubular rails in the greenhouse are evenly straight. "The robot does compensate for that, but it takes time."

To another row
Dimitri calculates that in the 3.6-hectare greenhouse with vine tomatoes, two robots should be able to do the job. "The plants have to be lowered once every fortnight. The robot does that very evenly, also at speed. This prevents the plant from dropping too much and the fruits from falling off, as is sometimes the case when people lower the plants too quickly. Moreover, the robot ensures that all hooks are hung at exactly the same distance. Such advantages must also be taken into account when calculating the business case for the grower. Using the robot delivers more than just a reduction in labor costs."

On the topic of hooks, can the robot handle all kinds of hooks? "The hooks here in the greenhouse are used by three-quarters of the growers, as confirmed to me by the producer. The length of the hook, ranging from 180 millimeters to 220 millimeters, doesn't matter." One challenge is moving the last plant in a row to the other row. Dimitri, who is working on the robot together with his colleagues' Dries and Jan, already has ideas about how to solve this, but he is keeping them to himself.

In the near future, the robot will make many more laps in the greenhouse, and at Veditec itself, in a special test set-up, further work will be done on the robot. As soon as the prototype is to the satisfaction of the grower and the robot constructor, the robot will be dismantled. An advantage here is that the robot has lost a lot of weight in the past two years. "The first version weighed 125 kilograms. That became dangerous when going up with the pipe rail trolley." Now the robot weighs only 25 kilograms. "Enough to carry the weight of the plants."

Taking the robot apart sounds crazy. But it actually makes sense, Dimitri assures us. "In this way, we can build up the robot in such a way that we can also start producing it in series." The focus is now on tomato, but other crops should also be possible, he estimates. "In cucumber, they lower the plants more often. Our starting point is the hook."