Simon Schumacher, VSSE, at the start of the strawberry harvest

Throughout Germany, strawberry plants are doing well. After an average mild winter and storms, the crops have weathered the late frosts well so far thanks to foil tunnels, fleece covers and frost protection irrigation. While the harvest is gradually starting in the high tunnels in southern Germany, it is setting in a little later in the cooler regions of Germany (see table).

"The frost protection measures have gone well due to the very dedicated efforts of the growers, and damage has been minimal so far. We will have enough harvesters for the strawberry harvest and are looking forward to a good start to the season with full enjoyment of local strawberries. Strawberry fans can now enjoy them without Corona restrictions in the farm cafes," explains Simon Schumacher, spokesman for the board of the Association of Southern German Asparagus and Strawberry Growers. (VSSE). 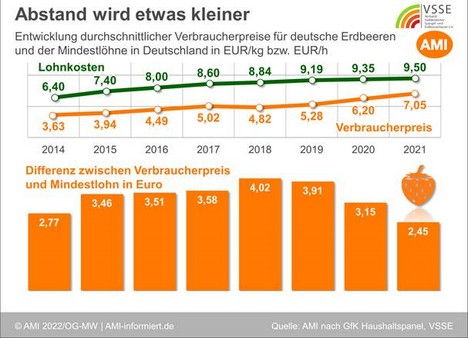 Good starting conditions for the season throughout Germany
"The storms have made life difficult for growers. Because of these and the late frosts, they had to put in a lot of extra effort. There was frost damage on a very small area in the early outdoor fields. Because the weather was very changeable in March, the strawberry yield can be inconsistent. Harvesting will start early around April 20," says Katrin Hetebrügge, strawberry crop consultant in southern Hesse.

"Covered up nicely, the strawberry plants in the tunnels have come through the cold nights well. The cooler and darker days have slowed down growth a bit, but we see no delays as a result. We expect the strawberry harvest to start on April 20/22," Christof Steegmüller, strawberry cultivation consultant in Baden-Württemberg and the Palatinate adds.

From Northern Germany, strawberry grower advisor Tilman Keller reports: "The strawberry plants show no visible damage. There were also no failures due to the frosts. March had a lot of sunshine, which enabled a good 'earliness'. The temporal spread between early, mid and late strawberry crops is good. Right now, there are typical vegetation differences between the south and the north, meaning that the harvest will start two to three weeks later in northern Germany."

Thanks to protected cultivation, customers can enjoy strawberries from April to July during the peak domestic season. 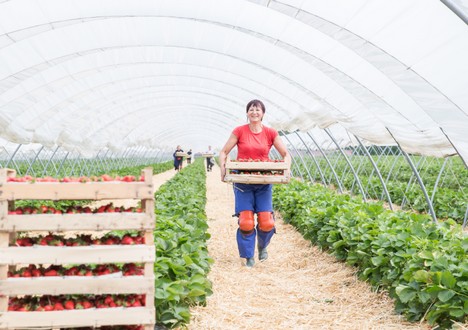 The strawberry tunnel harvest is now getting started / Image: VSSE

Good demand for domestic strawberries expected
According to Agrarmarkt Informations-Gesellschaft mbH (AMI), the market volume for strawberries in Germany fell by 9 percent to 253,000 tons during the pandemic period. This includes a drop in domestic production from around 152,000 tons (2020) to around 131,000 tons in 2021. Net imports (strawberry imports minus strawberry exports) fell from 126,000 to 122,000 tons, due in part to bad weather in southern Europe. As a result, the self-sufficiency rate for strawberries, i.e. strawberries produced and consumed in Germany, increased from 55 to 57 percent.