In 2021, Dutch greenhouse vegetable growers earned, on average, €315,000. That is about the same as in 2020. That means they are still the "big earners" among greenhouse businesses. Though, cut flower growers came very close this year. With a €140,000 increase in income, they earned €312,000, on average. That is according to an agricultural income estimate. It is from the Central Bureau of Statistics and Wageningen Economic Research.

The average greenhouse horticultural business is thought to have earned more than €290,000 per unpaid annual working unit. That is over €70,000 more than in 2020, and the average 2015-2020 income. Income rose because revenues climbed more (21%) than costs (18%). This growth is due to increases in ornamental horticulture. Income in greenhouse vegetable cultivation stabilized in 2021.

You can read more about this year's increased greenhouse vegetable costs (in Dutch) here. 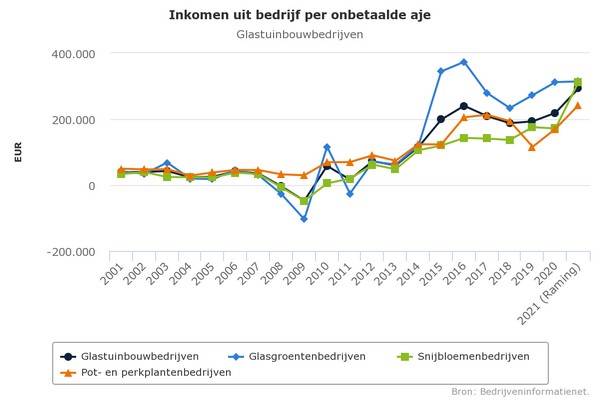 The estimated total revenue for an average greenhouse vegetable business in the Netherlands rose by more than 18% in 2021 to almost €3.6 million. This growth is substantial compared to previous years. Revenues have not increased this much in the last ten years. The boost is due to an increase in the size of an average farm. Tomato prices also greatly improved. And, on average, selling electricity also resulted in higher revenues. 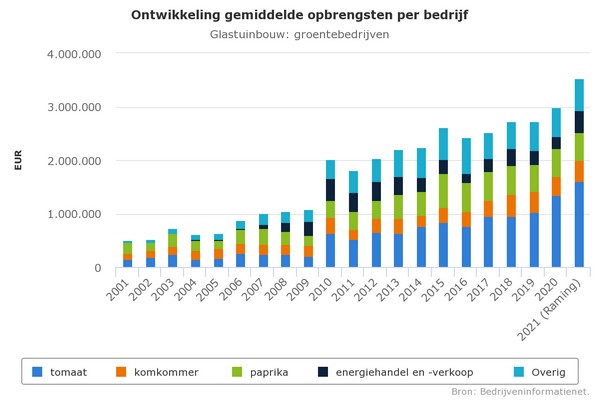 Tomato farms made more
Tomato cultivation had a fair to good year. Average prices showed recovery compared to 2020. They were even higher than in 2019. Out-of-home and hospitality industry sales channels closed during the global pandemic. Marketing channels had a lesser effect than a year earlier, increasing demand.

Tomato acreage fell in 2021 in the Netherland and Spain, a major competitor. The area again shifted further towards vine tomatoes at the expense of round loose tomatoes. Also, better prices were realized in especially the summer (July-September). That is when production is high. In 2019. there were several heat waves during that time.

Production was, however, under pressure this year. That was due to less sunlight and the Tomato brown rugose fruit virus (ToBRFV). This virus is plaguing both Dutch and overseas growers. Extreme hygiene measures are still in force. And growers are trying to keep the virus at bay. Fully resistant varieties are not yet available.

In general, these 2021 estimates consider a volume decline and a strong average price rise of 25%. This is partly a correction to 2020, when prices fell by 12% on average. Tomato price mutations and yields are important for average greenhouse vegetable companies. That is because more than 32% of their acreage (2021) consisted of tomatoes. So, this product is vital to the average company.

Bell pepper yields about the same for all average farms
Dutch bell pepper growers fared somewhat worse in 2021 than in 2020. Red block peppers did quite well. But the prices for other colors were lower than a year earlier. Orange bell peppers had a particularly difficult time. A larger Dutch production area pressured prices.

That was, in part, because there were fewer exports to the US and Japan. It was hard to reach those countries. That was because of the limited airplane capacity and associated high transport costs. Competition in those markets was fierce too.

Production also fluctuated due to volatile weather conditions. It was, once again, quite challenging for growers, cultivation method-wise. This erratic supply led to unstable pricing. The Dutch season started well. However, on balance, this estimate is based on roughly the same bell pepper yield for the average farm.

That implies a limited decrease per square meter. It also the different developments of the various colors into account. Of this year's total greenhouse vegetable area, 28% consists of bell peppers. Therefore, these changes in yields are crucial for an average bell pepper farm.

Average farm's cucumber yield about the same, fewer eggplants
According to this agricultural census, cucumber acreage in the Netherlands rose sharply in 2021. That was partly due to growers switching from tomatoes. Despite this seven percent increase, prices remained fairly level (-5%) with slightly higher production. The weighting of cucumber in the whole business changed. That means cucumber yields were fairly similar to last year.

Per square meter yields also stayed practically unchanged. Cucumbers make up about 11% of the greenhouse vegetable area. Therefore, a change in cucumber values is somewhat less important for an average greenhouse vegetable company. Eggplant prices fell. Other crops did better, mainly due to less competition from open field crops.

This year's cogeneration plants' spark spread was good. Despite this, it is estimated that almost the same volume of electricity was returned to the grid as in 2020. That is due, in part, to the increased gas prices in 2021's third and fourth quarters. That, in turn, led to the more economical use of energy. Those growers using lights also sold less volume back. Since purchased electricity is taxed, they used more of the produced power themselves.

The average income from selling energy should, however, increase significantly in 2021. That is because of the increased selling prices. How much depends highly on what happens in the Netherlands in November and December. This year's market is very volatile, so predicting this seems almost impossible. Nearly double the income from the sale of electricity (approximately +80%) has been factored in.

Such an increase means that electricity selling revenues could be good for 11-12% of an average greenhouse company's total income. Last year that was about seven percent. Bear in mind, not every greenhouse vegetable farm has a CHP system.

Other revenues
Dutch greenhouse vegetable companies make money in other ways too. These include activities done for third parties. That could be sorting and packaging, selling ware, and renting out cold storage facilities. In 2021 these revenues should increase by roughly seven percent.