Last week, the first mini vine cherry tomatoes came out of the lit greenhouses of CombiVliet in Rilland. That is unique for CombiVliet, or is it? "The first crop grown at this new-at-the-time location in Rilland in 2005 was also cherry tomatoes on the vine," remembers Hans Bouten, Location Manager at ZeeVliet. "Because the market demanded larger tomatoes, we quickly switched to larger vine tomatoes."

(It is still very early days for our first cherry tomatoes from the lit greenhouse. But the first ones are starting to color.

The first-ever in our company Rilland ❤️ Quite a challenge to find the right balance to use energy as efficiently as possible. 😅🤷🏽 pic.twitter.com/Pv9BJYETpt

Ever smaller tomatoes
CombiVliet has various types and colors of tomatoes in its range, no other fruit vegetables. "In consultation with Harvest House, the company that markets our products, we decide every year what types and varieties we will grow. It has to be a complete assortment, which we can offer year-round from the Netherlands."

CombiVliet has smaller and smaller tomatoes in lit greenhouses. "Consumers want Dutch tomatoes all year round," explains Martine van der Meer of CombiVliet. "They still see retailers putting all kinds of tomatoes in the same packaging. You might think you are buying Dutch tomatoes, but a few weeks later the same pack suddenly contains foreign tomatoes. Consumers don't like that! Neither do I, because the same happened to me last week in the supermarket... Apart from the fact that it is not really sustainable to bring them from so far away, it is disastrous for tomatoes to cool them: the flavor disappears and doesn't come back". 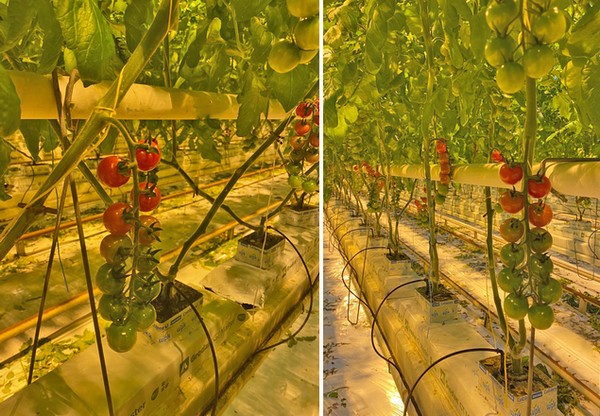 On the shelves within 2 days
At the ZeeVliet location, CombiVliet has 5 hectares of mini vine cherry tomatoes ready for the coming season. "The first bunches are starting to colour," shares Hans. "Because we have always had the larger vine tomatoes, this is a challenge in terms of cultivation and labor. It is simply different from what we have been used to for over 15 years. That also makes it fun!"

The location in Rilland is 17 hectares in total. CombiVliet grows the larger vine tomatoes on the remaining 12 hectares. "These are harvested directly in the final packaging. These 5 kg packaging is directly picked up by the buying party. The mini vine cherry tomatoes are packed by our packaging company Greenpack in portion packs according to the customer's wishes. They are on the shelves within 2 days, so they are of super quality. But be careful, don't store them in the fridge at home. That's such a waste of flavor."

Energy policy
The lights are on in the greenhouses in Rilland, but what about the rising energy prices? Hans: "Energy policy is one of the biggest challenges this year! Energy has become so expensive that growers are constantly looking for the right balance between cultivation and energy. Generally speaking, less light is being used. Cultivation is being adapted to lower light levels by increasing stem spacing and adopting a more specific pruning policy. We do this because the growing light that we have has to be used optimally by the plant."

The result of this efficient supplemental lighting policy is that production will be lower than in previous years. "Of course, this also has an impact on labour. The products will also have to fetch more, because they are more scarce and more expensive to grow. This is the world of today, we move with it as CombiVliet and make something beautiful out of it!"